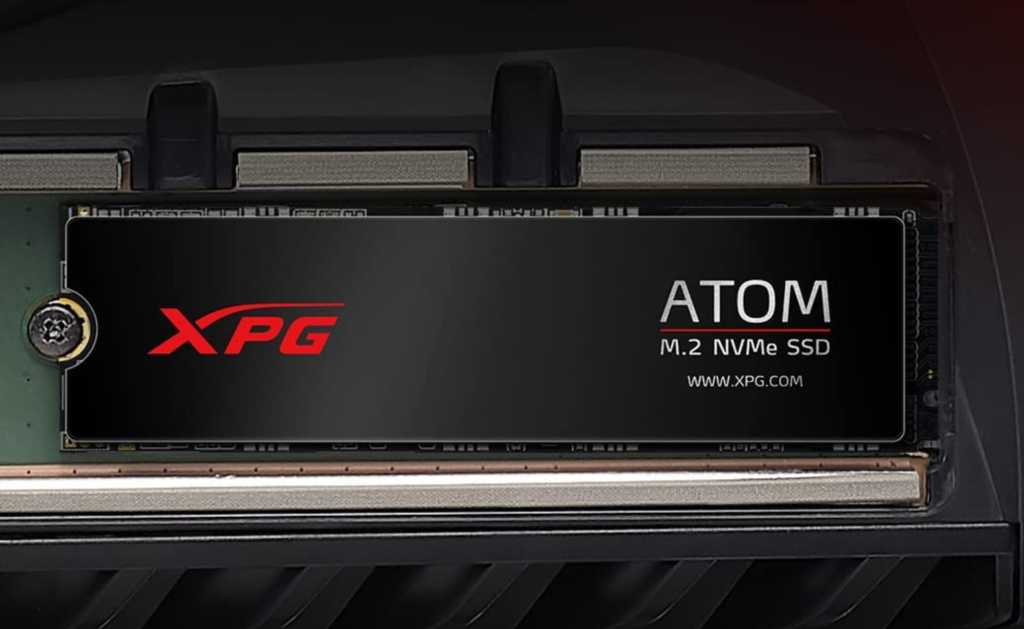 The Atom 50 was second-tier on synthetic benchmarks, but tied for number one in our real life transfer tests over PCIe 4. Nice. It’s affordable and PS5 compatible, but uses HMB (your PC’s DRAM) for primary cache, which the PS5 does not support. Hence, there might be a small drop in performance inside Sony’s console.

The Adata Atom 50 is one of the more affordable PCIe 4 SSDs on the market, which would seemingly make it a nice option for the PlayStation 5. It’s second-tier over PCIe 4, according to synthetic benchmarks, but it tied for 1st place in our real world 48GB transfers–a eye-opening performance considering the price.

Even more impressive, the Atom 50 managed that feat without a DRAM cache. It instead utilizes HMB (Host Memory Buffer, aka your computer’s RAM) primary caching, a technology we’ve seen less than stellar results from previously. Alas, Sony’s FAQ says thePS5 doesn’t support HMB, which means the Atom 50 may not be quite as fast inside that console.

Adata’s Atom 50 bucks the trend of bargain SSDs based on Phison-based designs by employing an Innogrit IG5220 to shuttle data to and from the SSD’s 176-layer TLC (Triple-Level Cell, 3-bit/state) NAND. As you’ll see below in the performance section, it proved very proficient.

As noted, there’s no DRAM cache, Adata instead opting for HMB. Also as mentioned, this is the first time we seen HMB perform up to snuff.

The Atom 50 is currently available in 1TB/$120 (tested) and 2TB/$250 flavors. That’s a hair pricy for a bargain PCIe 4 SSD, but it’s still in that ballpark and doesn’t consider any discounts you might see. The drives are warrantied for five years or 650TBW (TeraBytes Written over the life of the drive) per 1TB of capacity. That latter is about average for the price point.

The Atom 50 turned in good PCIe 3 numbers and decent second-tier numbers over PCIe 4 in CrystalDiskMark 6, CrystalDiskMark 7, and AS SSD 2. Those benchmarks rate the fastest PCIe 4 NVMe SSDs during sustained transfers at around 7GBps while the Atom 50 was just below 5GBps.

I should mention that second-tier NVMe is still quite good in the grand scheme of things and the norm at the Atom 50’s price point. It was easily the match of the equally bargain Sabrent Rocket 4 as shown in the CrystalDiskMark 6 numbers below.

Where things got interesting were during our 48GB real world transfers shown below. The Atom 50 over PCIe 4 actually tied the Corsair MP600 Pro XT for the fastest aggregate time (1 minute, 39 seconds) we’ve seen.

Looking at the Atom 50’s PCIe 3 48GB numbers, which aren’t bad but hardly record-setting, I’m thinking that HMB might be a lot more effective over the faster PCIe 4 bus than it was over PCIe 3.

The Atom 50 turned in an average time writing our single large 450GB file over PCIe 4, though it never slowed down handily outpaced the Crucial P5 Plus. The 450GB write tests secondary caching algorithms and the speed of the NAND. Keep in mind that the Atom 50 we tested was only a 1TB drive while the Sabrent Rocket 4 it nearly matched was a 2TB unit.

I found little to complain about with the Atom 50’s performance, even if it couldn’t match the 7GBps that top-tier SSDs deliver on synthetic benchmarks or their super-fast sustained 450GB writes (191 to 215 seconds). How often do you write 450GB? That said, consider the FireCuda 530 or MP600 XTs if every second counts, otherwise save money with the Atom 50.

The PCIe 4 testing was done on an MSI MEG X570 motherboard socketing an AMD Ryzen 7 3700X 8-core CPU, using the same Kingston DRAM, cards, and benchmark software. ImDisk replaces Softperfect as the RAM disk. All testing is performed on an empty, or nearly empty drive that’s TRIM’d after every set of tests. Performance of any SSD will decrease as you fill it up.

Write performance will decrease as the drive fills up. In some rare cases, components may change for the worse. Adata promises that the components in the Atom 50 will not change over time. However, our standard warning with any drive is if, given similar hardware, it does not perform as well as our test unit, let us know.

Excellent for the money

The Atom 50 is an excellent bargain and a good fit for your PC. It will work in your PS5, however, you might not see exactly the same performance. Still, this is a nice effort from Adata and the best HMB NVMe drive we’ve tested to date.

Note that this article was to edited on January 21st, 2022 to change the controller being used from the RealTek RTS5766DL to the Innogrit IG5220 that’s actually used.