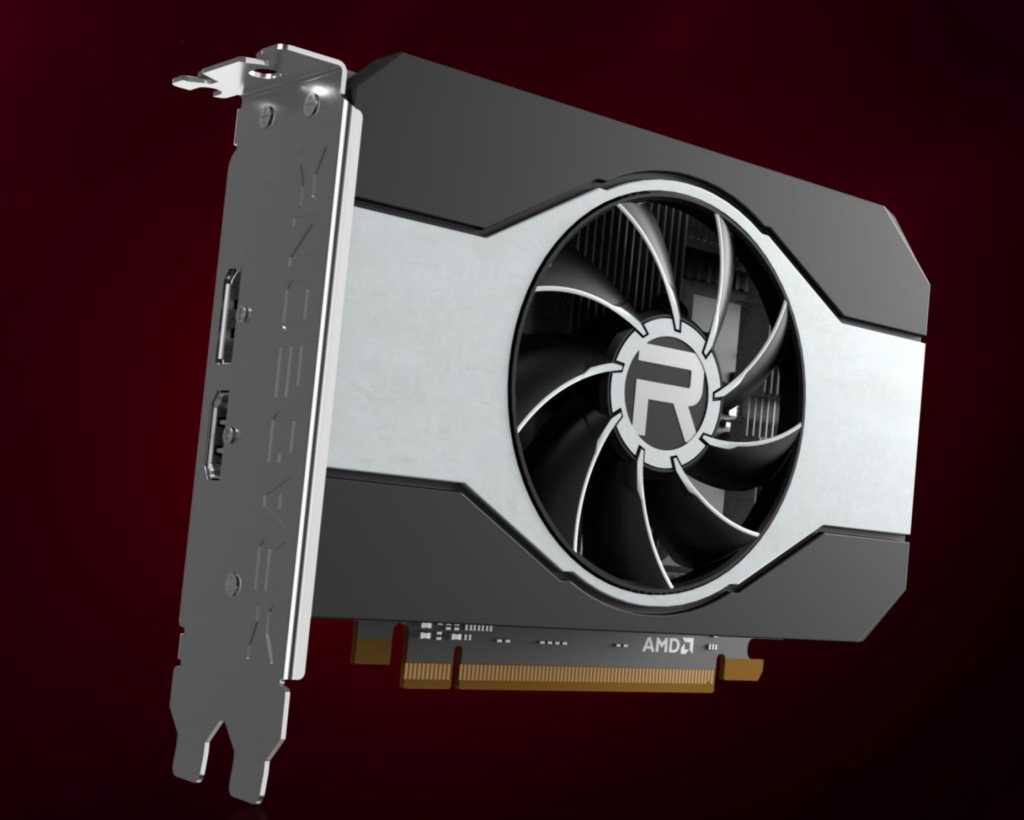 Cue the “It’s finally happening” GIFs. Well over a year after the launch of this GPU generation and after 12 months of excruciating supply woes, the first new-school graphics card that normal people might be able to afford is finally here. During AMD’s CES 2022 virtual keynote, the company introduced the Radeon RX 6500 XT, complete with an imminently affordable $199 suggested price when it launches on January 19. Hallelujah.

AMD didn’t divulge many details during the event, but in a pre-briefing prior to CES, Radeon chief Scott Herkelman told PCWorld that this will be the final RDNA 2 graphics card of its generation. Despite being the most modest offering, the Radeon RX 6500 XT is actually built using the most advanced manufacturing technology. It’s using TSMC’s 6nm process, a notch beyond the 7nm tech that the other Radeon RX 6000-series GPUs were crafted with.

Don’t expect miracles out of this GPU, however—except perhaps that it even exists in the first place. The specs that AMD did reveal place the Radeon RX 6500 XT squarely in the budget range. This GPU features 16 compute units and ray tracing accelerators along with 16MB of Infinity Cache, a radical RDNA 2 innovation that helps Radeon GPUs play games faster at the resolutions they’re tuned for. The configuration puts the Radeon RX 6500 XT at roughly half the firepower of the $330 Radeon RX 6600. Since the step-up, Radeon RX 6600 was the first true 1080p GPU of this generation, but with no visual compromises necessary, look for the new Radeon RX 6500 XT to deliver a solid 1080p experience with more modest graphics settings in place. (Stay tuned for independent reviews to confirm this, of course.) It helps that the Radeon RX 6500 XT is the highest-clocked model yet, humming along at a very brisk 2.6GHz.

Those ray accelerators mean the 6500 XT can handle real-time ray tracing, though frame rates will undoubtedly be low unless you flip on AMD’s FidelityFX Super Resolution, or the new Radeon Super Resolution feature that works in almost any game. (It’s basically FSR at the driver level.)

The gaming performance comparisons provided by AMD drive home the budget nature of this graphics card. The charts above show the Radeon RX 6500 XT beating out the older Radeon RX 570 and Nvidia GeForce GTX 1650 in a variety of modern games by solid, but not exceptional amounts. The Radeon RX 570 launched for $180 all the way back in 2017, while the GTX 1650 launched for $150 in early 2019. The Radeon RX 6500 XT should blow past both but in any other era, this graphics card likely would have cost far less.

We’re not in the Before Times, though, and a big part of the Radeon RX 6500 XT’s appeal will stem from whether it’s appealing to cryptocurrency miners eager to squeeze every possible ounce of profit from graphics hardware. AMD did not disclose the memory configuration of its new GPU during its CES keynote, but the company told PCWorld that the Radeon RX 6500 XT sports 4GB of GDDR6 memory. That greatly reduces its mining appeal. Ethereum—the cryptocurrency algorithm primarily driving the mining demand for graphics cards—requires more than 4GB of VRAM. The modest memory capacity should pair well with the capabilities of AMD’s humble Radeon RX 6500 XT, however. You won’t be maxing out graphics with this anyway.

If the Radeon RX 6500 XT manages to dodge the attention of miners, it could be just what the doctor ordered. PC enthusiasts might not get excited over a budget GPU, but a whole new generation of gamers discovered the allure of Fortnite, Rocket League and League of Legends over the course of the pandemic. Thanks to the Great GPU Shortage, there haven’t been any graphics cards for people unwilling to splurge and definitely not for kids saving money from summer jobs. In fact, things have been so bad that we’ve been recommending CPUs with beefed-up integrated graphics (like the Ryzen 7 5700G) and cloud gaming services like Nvidia’s GeForce Now as potential band-aids rather than actual graphics cards. The Radeon RX 6500 XT might—might—change that, though pent-up gamer demand could lead to price spikes the near term.

AMD slapped a $199 suggested price on the Radeon RX 6500 XT for its January 19 release. There will be no AMD-built reference version on sale, so actual street pricing will be at the whim of AMD partners like Sapphire, XFX, and Asus, and, of course, the retailers that sell the hardware. Likewise, while the graphics card can be configured to run without external power connectors—drawing all energy from the PCIe slot alone—Herkelman said that actual requirements will vary depending on the design of partner cards. AMD renders showed the Radeon RX 6500 XT outfitted with singular HDMI and DisplayPort connections, though that will likely vary by design as well.