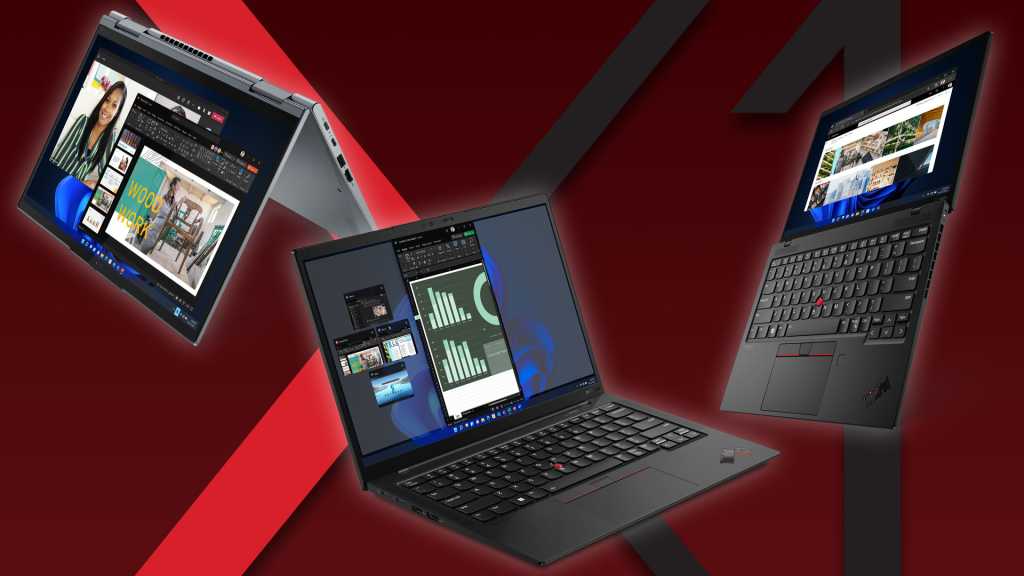 Lenovo’s been making the carbon fiber-infused version of the flagship ThinkPad X1 laptop for nine generations, each one incrementally sleeker and ostensibly better. For the tenth generation, announced at CES, Lenovo isn’t reinventing the wheel. But it is tweaking the design to better meet the needs of today’s workers shuffling between home and office, and added a few premium touches like an optional OLED screen upgrade.

As usual with the yearly update, this version of the 14-inch laptop gets the latest 12th-gen Intel Core processors, with high-end options in the U and P i7 series topping out at 14 cores. That includes a refreshed version of Intel’s integrated Xe graphics. Buyers can configure the laptop with up to 32GB of speedy new DDR5 memory and 2TB of NVMe storage, which they may want to do, since both are unlikely to be user-accessible. Wireless capabilities include Wi-Fi 6E, Bluetooth 5.2, and optional LTE via nano-SIM card (no 5G). Despite a svelte .59-inch frame, the laptop includes two USB-C/Thunderbolt ports, two older USB-A ports, full-sized HDMI, a combination headphone/mic port.

That OLED screen upgrade is definitely the star of the show on this improved model. It’s no off-the-shelf part, either: with a 2880×1800 resolution, 400 nits of brightness, and a 16:10 aspect ratio, it might just make your fancy monitor jealous. Other options include a more conventional 1920×1200 IPS LCD and an impressive 3840×2400 upgraded 4K IPS, both with touch options added on. Notably, the spec sheet does not include a touch OLED panel, so you’ll have to weigh your options if you’re looking to go all-out.

Other notable hardware includes an IR camera for Windows Hello, Lenovo’s standard hardware shutter, a power-on touch fingerprint reader, compatibility with the Tile system for finding lost items, a glass trackpad, and a starting weight of just 2.48 pounds (1.12 kg). The X1 Carbon’s typical MIL-SPEC 810H build quality is still present, but the signature keyboard has a new trick up its sleeve. It now doubles as an air intake for the laptop’s active cooling system. Even with this new design, the keyboard is still “spill-proof.”

The 10th-generation ThinkPad X1 Carbon will be on sale in March, with prices starting at a hefty $1639.

If the conventional laptop life isn’t for you, then you might consider the Yoga variation of the X1, now in its seventh generation. It gets the same 12th-gen Intel Core processors, RAM, and storage options as the standard X1, and it also brings along that optional OLED screen upgrade. This one boosts the resolution even higher to a 4K 16:10 panel and, of course, it includes both touch and stylus options to take advantage of that convertible form factor. Otherwise the hardware is nearly identical, with an understandable weight gain of half a pound. The seventh-gen ThinkPad X1 Yoga will be available in March starting at $1749.

Road warriors who need the smallest laptop possible probably had an eye on the new 13-inch ThinkPad X1 Nano design, which was first introduced last year. It’s sticking around for a second generation, with the same processor (P series), RAM, and storage upgrades as the larger machines, plus a choice of LTE or 5G mobile broadband with either physical or e-SIM support. That smaller frame means fewer screen options, 2160×1350 touch or non-touch, and a smaller 49.6 watt-hour battery. The port selection is pretty limited at just two USB-C/Thunderbolt ports and a headphone jack. But those compromises might be worth it for the weight savings — the base configuration starts at just 2.13 pounds (970 grams). The second-gen ThinkPad X1 Nano will be available in April starting at $1659.