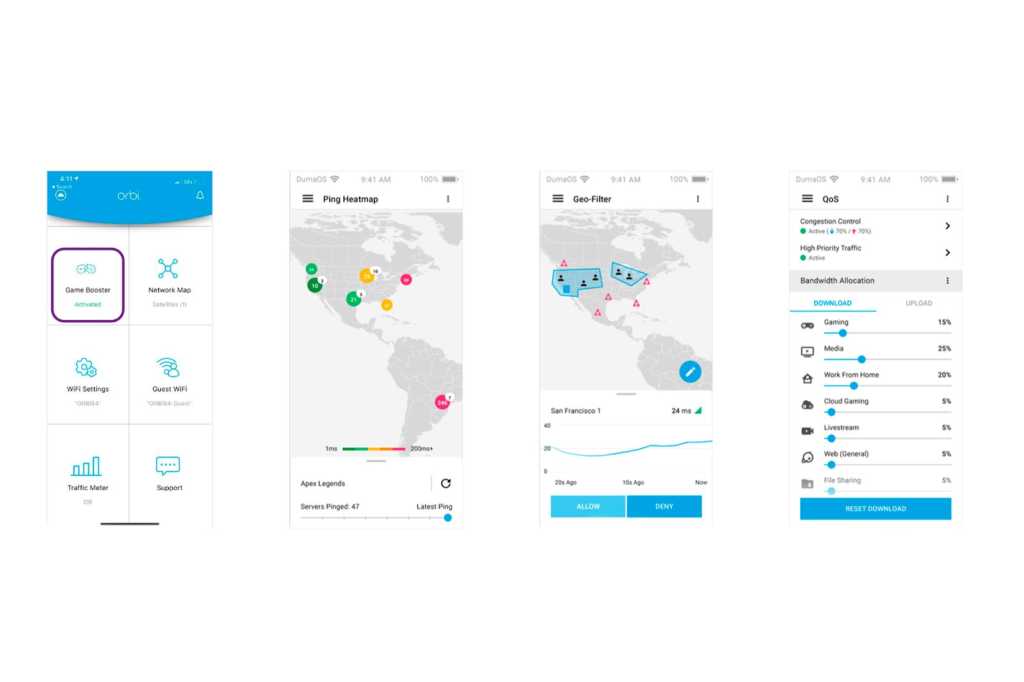 Netgear’s partnership with NetDuma has made the gaming experience on routers like the Nighthawk Pro Gaming XR500 or the more recent Wi-Fi 6 XR1000 arguably the best in the industry, thanks in no small part to Duma OS features that aim to reduce lag and ensure stable connections to gaming servers. Users of routers equipped with these features swear by them, and having used it myself and compared it directly to other routers, I can understand why: DumaOS puts gaming front and center in a way no other router manufacturer has managed, ensuring the experience remains intuitive without being insulting to those who know their way around a piece of wireless networking hardware. Now key DumaOS gaming and privacy features are making their way to the Orbi Wi-Fi 6 mesh router system, in the form of Orbi Game Booster, as announced ahead of CES 2022.

There are three main gaming features being ported to Orbi. First, Ping Heat Map allows gamers to ping gaming servers within the Orbi app so that they can view the speed of their connection to a given server. Additionally, the Geo Filter, like the Ping Heat Map feature, allows a user to optimize their connection to game servers, this time by setting a physical geographical area within which a game is allowed to search for a server connection, thereby limiting the actual distance packets must travel during a session.

Lastly, DumaOS has a Quality of Service feature that is brought over here. It involves a set of sliders so that gamers can easily and intuitively adjust bandwidth allocation per data type, so you can (for example) prioritize gaming in the evening, work from home features during the day, and reprioritize gaming in the evening, all on-the-fly. Netgear says it has witnessed up to a 93 percent reduction in ping in congested network environments with Orbi during its lab tests.

In addition to gaming smarts, Game Booster brings with it network-level ad blocking. The feature references a shared server maintained by Netgear and NetDuma to block ads and prevent cross-site tracking. The feature allows for custom website block and allow lists, and it can be toggled on and off per device on your network. The companies have not yet included the ability to set up profiles with rules on this, but I was told they may consider adding this down the line.

The feature will be rolled out to all Wi-Fi 6 Orbi routers, beginning with the 750- and 850-series units, in Q1 2022 with a 30-day free trial. Following that, the feature will be $50/year. Presumably, this will also include the recently released Orbi Wi-Fi 6 5G Mesh (NBK752), which brings the alternative of 5G internet to underserved broadband users on the AT&T, T-Mobile, and (in Q1 2022) Verizon networks. It’s disappointing that this feature isn’t rolling into the pricey Netgear Armor plan, which is $100/month on its own, particularly considering that the feature is free on Netgear’s DumaOS-equipped devices, albeit without ad blocking.