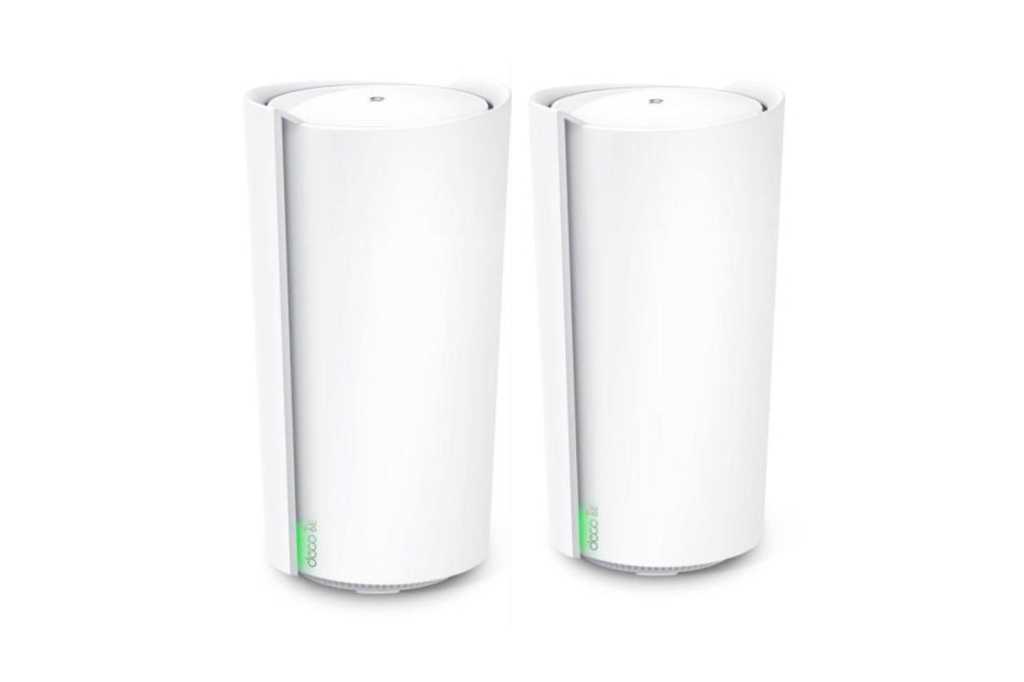 TP-Link opened up a firehose of router news on us this year for CES, some of which was in the more traditional, beefy single access point vein, and some of which advances the Deco line of mesh routers in several directions at once. There were so many announcements, in fact, that we’ll focus solely on the mesh systems here.

The biggest mesh reveal is the Deco XE200. Planned for the second quarter 2022 and estimated to cost $799.99 for a 2-pack, this is the successor to the Deco X90, TP-Link’s previous tri-band Wi-Fi 6 mesh flagship. The XE200 retains the same vaguely conical paper towel roll look, but offers 40 percent more total theoretical throughput at 11Gbps. The split is 4.8Gbps each on the 6GHz band and 5GHz band, with the final 1.1Gbps available on the 2.4GHz band. TP-Link says the system uses a dedicated 4.8Gbps wireless backhaul, but does not specify which band serves that role—presumably the 6GHz band is used, since most users’ networks will be made up of largely 5GHz client devices. Naturally, this throughput is all based on lab testing, and you should not assume you’ll achieve these speeds in your home, but it’s not crazy to expect to see 600-700Mbps on your local network with good 160Mhz channel bandwidth devices—possibly more if you’re right next to the router.

To run down some of the other specs: Every node will be identical, equipped with a 10G LAN/WAN port in addition, presumably, to standard gigabit ports. The Deco XE200 will also feature a 2.0GHz quad-core CPU, which is a boost from the 1.5GHz CPU of its predecessor. A single 2-pack is rated to cover 6,500 sq. ft., and should be able to handle connections from over 200 devices. With so much wireless speed on offer, in addition to the potential for wired 10Gbps backhaul, this mesh system comes closer to justifying its high pricetag than many similar offerings from companies like Netgear and Linksys, which also offer super fast Wi-Fi 6E mesh systems in the upper hundreds of dollars or low $1,000 range. $800 is still eye-watering, but if you’re serious about having a fast local network or future-proofing in anticipation of a multi-gigabit ISP connection, the XE200 looks like it could be well worth a look.

TP-Link will also be releasing the Deco XE75. Priced to be a more consumer-friendly Wi-Fi 6E mesh system, the XE75 will be released in March 2022. It will have a 1.7GHz quad-core CPU, three gigabit ports per node, and is capable of up to 5,400Mbps throughput across its tri-band connections. Like the XE200, both the 6GHz and 5GHz bands will have equal max throughput—2,402Mbps in this case—and the 2.4Ghz band will have a maximum theoretical throughput of 574Mbps.

The company will also be releasing the smaller-form-factor dual band Wi-Fi 6 AX3000 Deco X55. The mesh system offers HE160 support, meaning devices capable of 160MHz channel bandwidth connections will have greatly improved throughput relative to normal 80MHz devices. Like the XE75, the device will have a maximum theoretical 2,402Mbps throughput on the 5GHz band and 574Mbps on the 2.4GHz band, and each node has three gigabit ethernet ports. At first blush, it looks identical to the X60 that preceded it, just with a black top instead of a white one, but the X55 is notably different in its support for HE160, among other changes. TP-Link says a 3-pack will be available this month—January 2022—for $279.99. A variant of this device has a built-in IoT hub, which TP-Link has implemented in past Deco routers like the Deco M9, which used Zigbee and Bluetooth radios in addition to Wi-Fi to communicate with smart home devices.

Finally, TP-Link has announced several niche Deco devices all under the X50 designation. Among those are a Power over Ethernet version, which receives power via either a 2.5Gbps port or a gigabit port, with auto-sensing depending which is in use. An outdoor variant is IP65 dust and water resistant, and so should be protected against dust ingress and water jets coming from any direction. Both will be released in the second quarter of 2022, but it’s unknown whether the same can be said of the Deco PX50 powerline mesh, the Deco X50-5G hotspot mesh, or the Deco Voice X50, which of course will have voice assistant capabilities. All of these devices are Wi-Fi 6-capable, and can be added to existing Deco mesh networks.