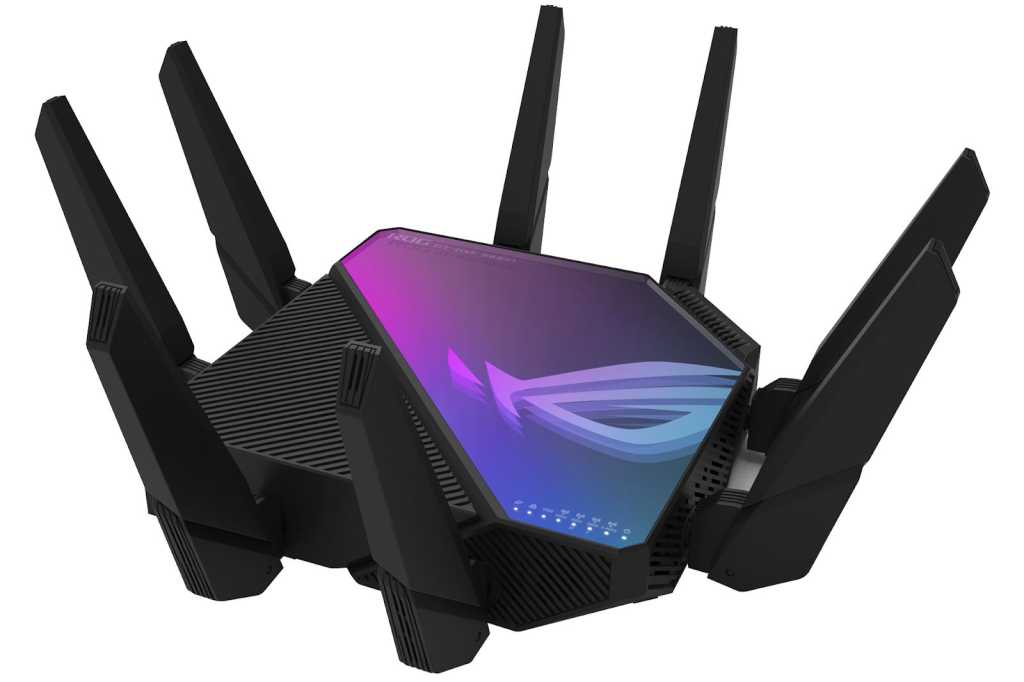 Asus continues to refine its powerful ROG Rapture routers with the announcement of not one, but two new products at CES 2022. These eye-catching pieces of kit feature extremely aggressive “gamer”-esque stylings—and they should be just as fast as they look.

The most significant of the two is the Wi-Fi 6E quad-band Asus ROG Rapture GT-AXE16000. This new router is similar to last year’s Rapture GT-AXE11000 in most ways: It will offer up to 4.8Gbps throughput on each of the 5GHz and 6GHz bands, and 1,148Mbps on its 2.4GHz band, but now adds a second 4.8Gbps 5GHz band, removing the need to choose between keeping the second 5GHz band or trading it in for a 6GHz band that the vast majority of the devices on their network likely don’t even use yet. Altogether, that makes for 16Gbps of total theoretical combined throughput (speed you will never see in practical use, but which is still indicative of a very fast router). It’s likely, given Asus’s track record, that all three bands will be capable of 160MHz bandwidth, so potential wireless throughput should be extremely fast.

Physically, it’s obviously very similar to the original GT-AXE11000—still a very industrial, chunky squareish thing—but with a clear panel over the ROG eye logo that makes it look a tad more refined. We’re told this will incorporate RGB lights like that previous model, but it looks like it’ll be edge-lit, rather than shining from beneath the logo as before. The antennas also appear to be quite a bit chunkier, and in addition to the eight externals, there will also be four internal antennas.

One of the Asus ROG Rapture GT-AXE16000’s other big updates can be found in the dual 10Gbps RJ45 ethernet LAN ports. They won’t necessarily do anything to improve in-game performance, but would absolutely speed up your intra-network connections wherever properly-equipped devices are connected, making for super-fast file transfers. Meanwhile, a 2.5 Gbps WAN port gives you plenty of headroom for your ISP connection to grow into. Four gigabit LAN ports round out the ethernet options. It’s very nice to see consumer router companies finally including two or more multi-gig ports, after years of getting single 2.5Gbps ethernet LAN/WAN ports. It’s better than nothing, but we only recently started seeing affordable 2.5Gbps network switches that would allow you to take advantage of one multi-gig LAN port, and it’s still very rare to have access to 2.5Gbps Internet.

The company has also announced a refresh of the Wi-Fi 6 GT-AX11000, this time called the ROG Rapture GT-AX11000 Pro. In nearly every way identical to the GT-AXE16000, the Wi-Fi 6 access point is only missing the fourth 6GHz band, 4 internal antennas, and the glass panel on top. It improves on its predecessor with dual 10Gbps LAN ports and a faster CPU—the original had a 1.8GHz processor, and gets 1GB DDR4 SDRAM instead of DDR3.

Both the GT-AX11000 Pro and the GT-AXE16000 are AiMesh-capable, while the latter can use its 6GHz band for dedicated wireless backhaul with other Asus AiMesh Wi-Fi 6E routers. Asus expects the ROG Rapture GT-AXE16000 to release first, in Q1 2022, for $649, while the ROG Rapture GT-AX11000 Pro is planned for the second quarter, priced at $399. Those prices put them $100 more, and $50 less, than their predecessors, respectively