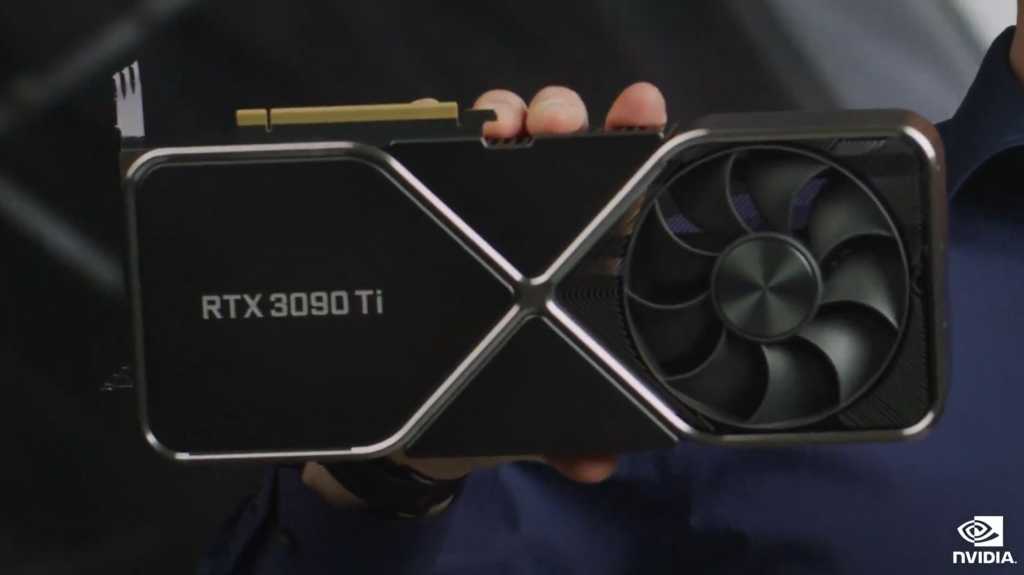 Does Nvidia know we’re knee deep in the midst of The Great GPU Shortage? Seems not. During its CES 2022 keynote, the green team came out swinging with not one, not two, but four fresh graphics cards for desktops and laptops alike, ranging from the entry-level GeForce RTX 3050 to a beastly new GeForce RTX 3090 Ti flagship.

Let’s start with the GeForce RTX 3050, since the world is in dire need of affordable graphics cards. This latest GPU may be the most affordable RTX graphics card yet at $249, but it packs all the modern Nvidia features you’d want, including dedicated hardware for real-time ray tracing and DLSS, support for Nvidia Broadcast and Reflex, HDMI 2.1 and DisplayPort 1.4a, and more. Nvidia didn’t reveal specific CUDA core counts or other under-the-hood details, but did say the RTX 3050 will pump out nine shader teraflops, 18 ray tracing TFLOPS, and 73 tensor TFLOPs when it launches on January 27. Not that technobabble gobbledygook like that matters to people looking to get their hands on a cheap GPU.

You know what does matter? AMD revealed a mainstream GPU of its own at CES 2022, the Radeon RX 6500 XT. Team red’s offering checks in with a lower starting price at just $199, but only wields half the amount of memory—just 4GB of GDDR6, compared to 8GB for Nvidia’s RTX 3050. Normally, more memory is better. But the real question is whether the RTX 3050’s ample memory buffer makes a practical-enough difference to be worth the extra cash, considering the entry-level performance expected from these graphics cards. We won’t know the answer to that until test samples hit our benchmarking rig. There’s another consideration as well: The Radeon card’s 4GB of memory makes it unusable for Ethereum mining, while the RTX 3050’s 8GB buffer make it yet another purchasing target for cryptocoin enthusiasts. We’ll see how it goes.

Then there’s the extreme opposite of the RTX 3050: the GeForce RTX 3090 Ti, which Nvidia teased as “our next BFGPU.” It’s an even more potent version of what was already the most powerful consumer graphics card in the land. The vanilla GeForce RTX 3090 worked hard and played hard alike, but the 3090 Ti puts the pedal to the metal even harder. Nvidia didn’t get into details, saying only that the 3090 Ti offers 40 shader TFLOPS, 78 ray tracing TFLOPS, and 320 tensor TFLOPS—numbers that make much more sense for business uses. But more importantly for the sort of creative and production workloads this GPU excels at, the memory is much faster than before. The RTX 3090 Ti still packs a humongous 24GB of GDDR6X memory, but at even faster speeds—a blistering 21Gbps across a wide 384-bit bus, good for a ludicrous 1TB per second of maximum memory bandwidth. Oh my.

Of course, we said the vanilla RTX 3090 should really only be purchased by people who can put the massive memory buffer to productive use, as its steep $1,500 price tag wasn’t justified for pure gamers, who would be much better off with the RTX 3080 instead—and that was before the GPU Shortage sent prices through the roof. Mostly bolstered by even-faster memory, that’s doubly true for the RTX 3090 Ti. (Unless you’re the sort of enthusiast who absolutely, positively demands the fastest graphics hardware possible, that is.) Nvidia didn’t disclose pricing, but said to stay tuned for more details later this month.

Like AMD’s rival Radeon group, Nvidia didn’t stick to desktops alone. The company also revealed a pair of new high-end notebook graphics options: The RTX 3070 Ti and 3080 Ti, upgraded versions of mobile GPUs that have been found in laptops since last year.

The RTX 3080 Ti is the new flagship, supplanting the RTX 3080 Laptop chip, with Nvidia claiming its performance tramples last generation’s RTX Titan desktop graphics card. It has 16GB of “fastest ever” GDDR6 memory, and the ability to hit over 120 frames per second with graphics settings maxed at 1440p resolution. The RTX 3080 Ti will be found in laptops starting at $2,499 when it launches on February 1. (Expect many RTX 3080 Ti laptops to cost much, much more, though.)

Then there’s the step-down RTX 3070 Ti Laptop GPU. Nvidia didn’t divulge many hard specs here either, but said this chip offers up to 1.7x the performance of last generation’s RTX 2070 laptops, offering the ability to hit 100fps at Ultra settings at 1440p resolution. RTX 3070 Ti laptops will start at $1,499 when they also launch on February 1.