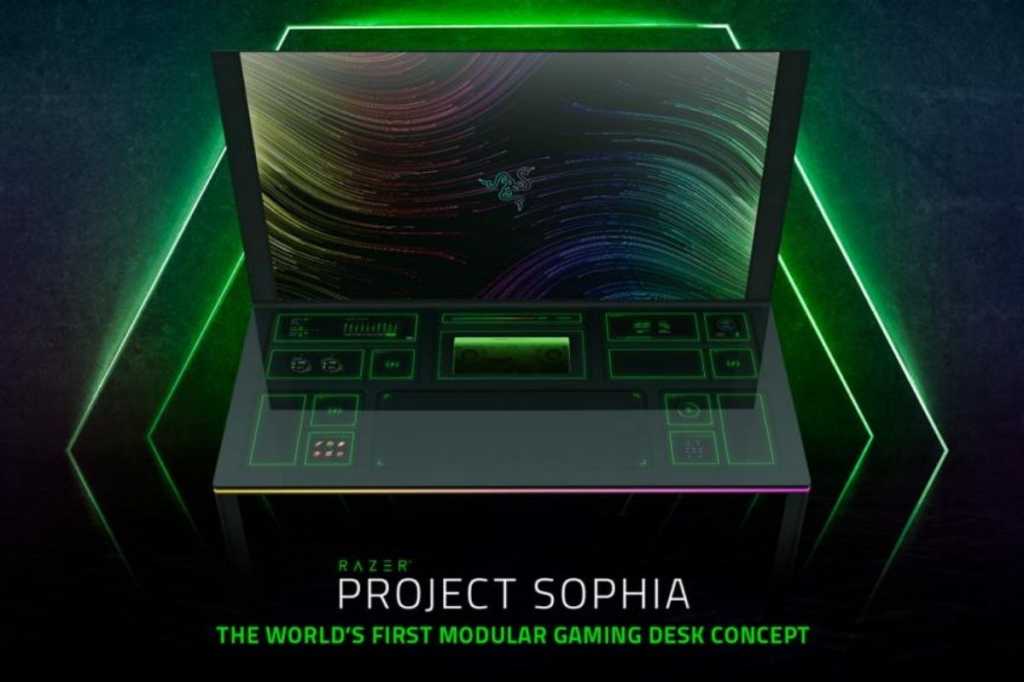 Razer loves to woo PC enthusiasts with products that are so far-fetched, it’s like they jumped straight out of the Matrix universe—witness the triple-screen Project Valerie laptop, radically modular Project Christine desktop, and room-filling Project Ariana projector of years past for just a few examples. But this year’s moonshot is truly kind of wild. Introduced at CES 2022, Project Sophia is Razer’s latest gaming desk concept. It’s a prototype, so there’s no information on pricing or availability, but if it somehow winds up becoming a reality I suspect it’s something I won’t ever be able to afford (unless I sacrifice my first born). This thing is massive, like truly massive. I mean, it’s attached to a 65-inch OLED display. But let’s dive into what this desk is all about because it’s a lot to digest.

The coolest thing about this desk is that it’s one part computer and one part furniture. Essentially, you can insert different components into the desk thanks to its modular design. The appeal is that it’s fully customizable. Have a Zoom call in an hour? Need to stream on Twitch later on? With this desk, you can reconfigure multiple setups based on your needs. The desk has up to 13 module slots. That means you can snap in pieces like hotkey panels, secondary screens, temperature readouts, audio mixers, and so much more. Heck, there’s even a spot for a mug heater.

As for the hardware, the Intel processor and Nvidia GPU live inside a chassis that magnetically attaches to the bottom of the desk. So, if you’re pining for a new CPU or GPU, the magnetic chassis makes it incredibly easy to access and swap out the internals. There’s also a 65-inch OLED screen built into the station.

Is this modular station a bit much? Maybe. Is it cool? Absolutely. Would I like one? I’ll take two. While I love how Razer reinvents the workstation, I can’t help but wonder if this prototype will ever see the light of day. Based off the track record of Razer’s previous CES “projects”—very few of which ever turned into something you could actually buy—I’m not holding my breath.