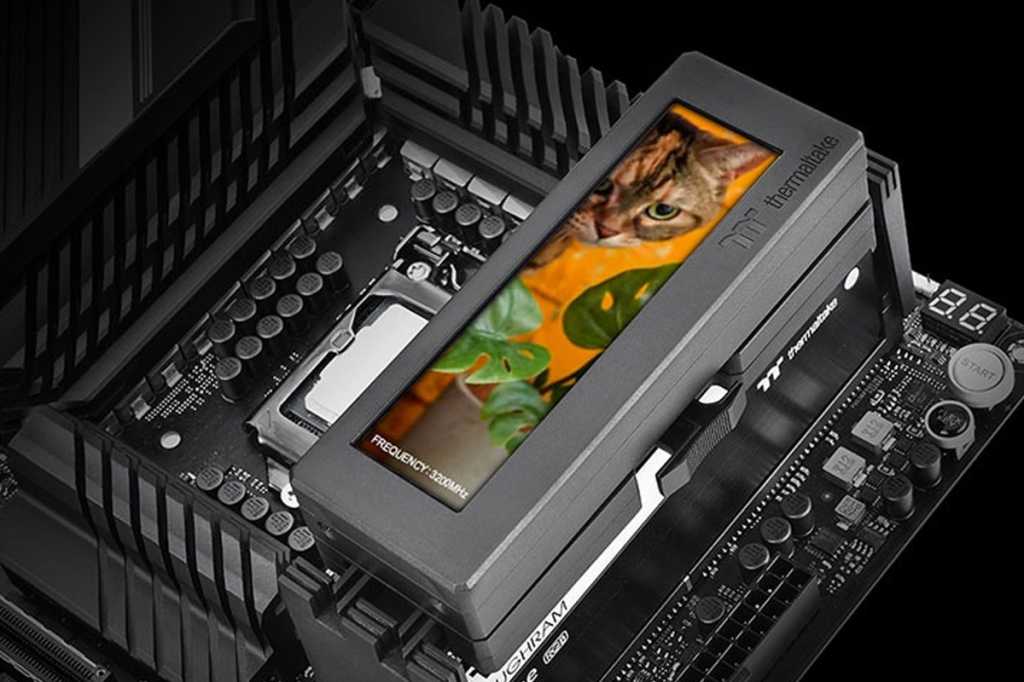 Look, I’m a self-admitted addict of screen real estate. There are three monitors and three mobile screens in front of me now, all on, with a combined pixel count of around 18.5 million. But even I struggle to see the point of filling the inside of a desktop PC case with tiny screens and animations. You’ve got the monitor right there! Surely any relevant information you need would be better displayed on something you don’t have to squint at through tempered glass and power supply rails.

But I digress. The Thermaltake Pacific R2 Ultra is a tiny 3.9-inch monitor that sits on top of the RAM slots on your motherboard. For some reason. It’s been announced at CES 2022.

This isn’t actually a screen specifically for your memory, it just happens to be resting on top of it, as apparently any open space inside an ATX case must now be dedicated to The Bling. It’s not powered by the electricity going to your RAM, rather it gets both power and data via a MicroUSB cable, notably absent from any of the press images of the contraption shown thus far. As noted by HotHardware, the Pacific R2 Ultra is actually a more crude, less functional version of an existing product, the Pacific A2 Ultra, which also works as a water block for overclocked memory in custom liquid cooling loops.

What can you do with that tiny 480×120 screen? According to Thermaltake’s promotional materials, you can use it to display the temperatures of various PC components, show off the operating frequency of your CPU or GPU cores, all via the RGB Plus 2.0 software. Alternately, you can load up any custom artwork or animation. May I suggest a looping GIF of some classic Simpsons bit? It would certainly be more tasteful than an anime pinup, which seems to be one of the recommended uses on the Thermaltake website.

The Pacific R2 Ultra can be fitted on top of DDR3, DDR4, or DDR5 memory, and it should fit into any case that will accommodate its 71mm total height. Naturally, you’ll want to combine it with a case that has a window. The R2 Ultra doesn’t have an official US price at the moment, but it’s listed for €115 on Thermaltake’s EU store (about $130). If you want the included heat spreader and water block of the A2 Ultra, it’ll cost you $185. Combine it with the Pacific MX2 CPU water block ($175), which features a circular LCD screen, for maximum Bling potential.