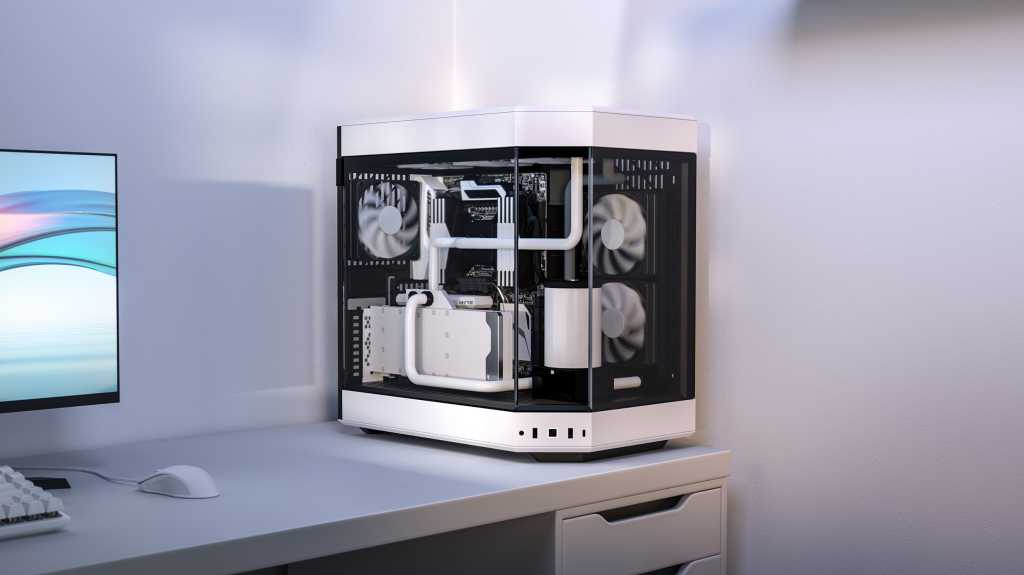 At this point, nearly every DIY builder knows the O11 Dynamic. Scores of people love using it too, even when there’s not a single tube of custom water-cooling inside. The case is a showpiece, and if Lian Li’s many size variations of it are any indication, it’s a formula not to be messed with. Other companies have produced uncannily similar creations, to boot.

Not Hyte. This relatively new offshoot of system integrator iBuyPower launched last year with the Revolt 3, a case that resembled the NZXT H1 and SSUPD Meshlicious, and yet held its own with distinct details that set it apart. In 2022, the company’s doing it again with the Hyte Y60, a case on the opposite end of the scale—think the size of the just-launched O11D Evo.

At 456 x 285 x 462mm, the Hyte Y60 shares similar dimensions with the O11D Evo—Hyte even says its case is almost “dead-on” in size compared to the Evo. The Y60 is far more striking, though. Instead of having a standard cube frame, the left front edge has been replaced by an angled piece of tempered glass, making for an uninterrupted view of the interior.

Initially that “panoramic view,” as Hyte describes it, can take a moment to absorb. It’s a unique look that requires a little growth of imagination, but picturing a system decked out with RGB fans, custom fan grills, and even figurines or a plush toy (yes, that is a trend), and you can see it like a display case.

And indeed, Hyte sees the Y60 as being designed for photography—you can capture your build in all its glory with a single shot, rather than having to use multiple perspectives. (It remains to be seen how cooperative that glass is in terms of reflectiveness, though.)

The glass panels aren’t the only features that makes it photo-worthy. Not only does Y60 focus exclusively on vertical GPU mounting, which puts your hard-won graphics card on full display, but it tucks away the bottom fans in a shallow, vented shroud to keep the focus on the star of the show. And the included custom-length PCIe 4.0 riser cable for the vertical GPU mounting comes with its own little shroud to cover it, too.

Mixed with these aesthetic touches are sensible, pragmatic elements as well. That vented shroud supports up to two 140mm fans to ensure maximum airflow for your GPU, for example, and included with the case are two 120mm fans. Accessing the bottom fans is as simple as opening a panel on the Y60’s underside.

Airflow in the rest of the case should be easy to manage as well, with a top mounting spot that supports both 120mm fans (up to three) and 140mm fans (up to two) as well as 280mm and 360mm radiators. The side mounting spot can take up to two 120mm or 140mm fans and up to a 280mm radiator, with a noteworthy amount of clearance allowed for rad setups—you can go up to 130mm thick before needing to worry about running into the GPU. Hyte says push/pull rad configurations are easily accommodated. Rounding out the mounting points is a single spot at the rear, which can take up to a single 120mm fan or rad.

The Y60 also supports ATX power supplies and up to two 3.5-inch or four 2.5-inch drives (or some combination in between), which all install behind the motherboard. Speaking of motherboards, you can drop in ATX, micro-ATX, mini-ITX, and EATX boards up to 10.6-inches in width. Hyte says it designed this case with ATX builds in mind, though. In fact, the Y60 supports half-height PCIe cards behind the GPU, so that you can still get some use out of all the PCIe slots on ATX mobos.

The Hyte Y60 will launch with an MSRP of $200 USD and a target of mid-March for release in North America. Other territories will follow after. For comparison, the O11D Evo has an MSRP of $170 USD, with the vertical GPU mounting kit an optional purchase and no fans included.

Colors available will be white, black, and a red/black combination. When asked, the company says the removable top and right-side panels can be sold separately upon request, so if you want to roll a different color combo (say, white and red), it’s possible.

Time will tell how deeply the Hyte Y60 will lessen PC builders’ current love affair with Lian Li, but from the look we had at it, it seems poised to enter the field as a strong rival. That’s not the only area of PC building and PC gaming that Hyte is looking to shake up, either—also announced were the SR65, a highly customizable premium mechanical keyboard in the $350 to $400 range, and the Eclipse HG10, a minimalist wireless headset that’ll sell for $100.