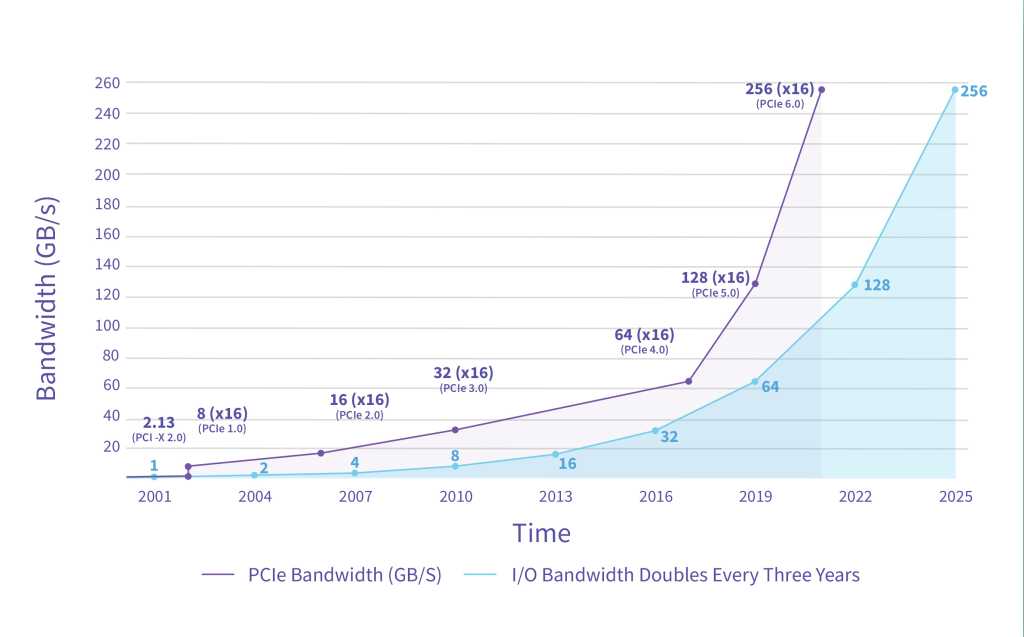 Proving that whenever you buy something new, a better thing immediately comes out, the PCI-Sig Group announced the release of PCIe 6.0 on Tuesday, which will double the raw data rates of the PCIe 5.0 technology that only just debuted in Intel’s 12th-gen ‘Alder Lake’ Core processors.

PCI-SIG, the group that oversees the specification, said PCIe 6.0 will support 64 Giga Transfers per second, which equals about 256GB/s over a 16 lane configuration. To reach that blistering speed, PCIe 6.0 will use Pulse Amplitude Modulation with 4 levels, or PAM4, as well as updated packet management and flow control. Of course, like all versions of PCIe, it will be backwards compatible with previous versions.

Long-time chair and president of the PCI-SIG, Al Yanes, said the new standard will be initially aimed at data centers, but like previous versions of PCIe, will scale out to other uses over time. The spec has been brewing for some time but the final release means vendors can finally begin making hardware to support it.

Intel alder Lake are the only CPUs with pcie 5.0 support currently

For normal people with normal desktop and laptop PCs, the announcement isn’t something to worry about in the here and now, as the vast majority of modern computers are lucky to feature PCIe 4.0, which was introduced four years ago. PCs using PCIe 5.0 were only just introduced late last year with Intel’s 12th-gen Alder Lake CPU, with AMD announcing last week that Ryzen 7000 CPUs scheduled for the second half of this year will also support it. Although no GPUs have been announced with PCIe 5.0 support yet, Samsung, Adata and a few other storage companies have demonstrated SSDs using the new interface—and yes, they’re stupidly fast.

Even so, transferring 256GB/s is well beyond most personal computer needs right now, so you may wonder why PCIe 6.0 is being announced now. Beyond the fact that data centers and many high-performance computing applications do need more interconnect performance, personal PCs benefit by having the infrastructure in place ahead of time.

In short, think of what the PCI-SIG does for the personal computer as building out the freeways of the PC before the roads get congested rather than waiting for them to become a gridlocked version of Los Angeles.

Although it may look like PCIe 6.0 is “too soon,” the PCI-SIG has generally kept to fairly ambitious and reliably predictable schedule of doubling bandwidth every “three years.” The longest drought lasted from PCIe 3.0 to PCIe 4.0, which took seven years to be finalized as a spec, with hardware arriving two years later in AMD’s fantastic Ryzen 3000-series processors.