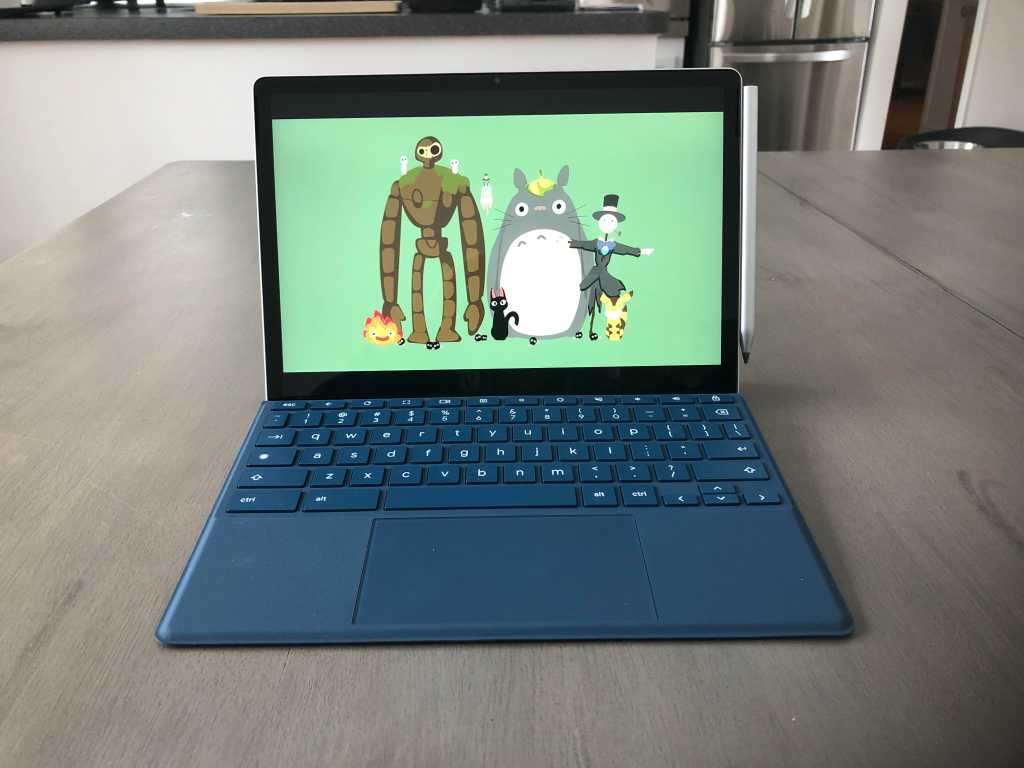 IDG / Ashley Biancuzzo
At a glance

With its all-day battery life and lightweight form factor, the HP Chromebook x2 11 is one of the best 2-in-1 laptops you can buy today.

I’m not the biggest fan of folio-style laptops. The additional attachments are cumbersome and the keyboards are notoriously small and cramped. However, the HP Chromebook x2 11 da0023dx took me by surprise and I mean that in the best way possible. With its solid performance, superb display, and beautiful brushed aluminum finish, this mid-range Chromebook has a lot to offer. Not only is the keyboard pleasantly clicky and suitable for long typing sessions, but the kickstand also keeps the tablet nice and stable. The price isn’t half bad, either. I did have a few minor nitpicks, though.

The trackpad, though over-sized, is too sensitive at times. There’s not a lot of separation between the trackpad and palmrests, so it’s easy to fire off a few misclicks. The port selection is a bit limited, too. There’s only two USB Type-C, which is sort of meh. It’s not a major deal, really, as it’s nothing an adapter can’t fix. That said, if you can live with these drawbacks and you’re in the market for an affordable and portable 2-in-1 Chromebook, look no further than the x2 11. Read on to learn more.

The HP Chromebook x2 11 comes equipped with a Snapdragon 7c CPU, Adreno 618 graphics, 8GB of RAM, and 64GB of eMMC storage. The 11-inch display has a 1440p resolution, a 3:2 aspect ratio, and is touch-enabled. For ports, it’s just two USB Type-C. This model retails for $599 but is currently on sale for $399 at Best Buy, which is a real steal. It’s a good price for a Chromebook with 8GB of RAM (most Chromebooks come with only 4GB) and a 2K touchscreen.

When it comes to Chromebooks, cheap and plastic designs may spring to mind. After all, they’re meant to be inexpensive machines. But that’s simply not the case with the HP Chromebook x2 11. The tablet itself feels great in hand. The aluminum chassis is rugged and the display is protected by Gorilla Glass. You can tell it’s a well-made product, that’s for sure. With the tablet itself, I’ve got no complaints. As for the detachable keyboard, I had one minor nitpick.

The keyboard has some bend to it, which I didn’t love. I prefer keyboards with little to no flex. That said, it’s perfectly usable for the everyday person. After taking some time to get accustomed to it (I’m used to typing on a mechanical keyboard), I found it suitable for long typing sessions. The keys are on the smaller side, but I didn’t mind, as I have smaller hands. The keyboard itself also attaches to the tablet portion of the Chromebook via magnets and that connection felt both strong and secure.

As for aesthetics, the HP Chromebook x2 11 looks like a premium product. The silver finish is subtle, sophisticated, and doesn’t draw much attention to itself. Personally, that’s the kind of aesthetic I go for in laptops. It’s clean. The detachable keyboard and kickstand are a nice deep blue color. When it’s all closed up, the 2-in-1 resembles an e-reader tucked away inside of a swanky cover.

I’m accustomed to typing on a full-sized mechanical keyboard, so the HP Chromebook x2 11’s detachable keyboard took some getting used to. That said, it’s suitable for long typing sessions. Once I became more familiar with the keyboard, I was able to comfortably write this review. The detachable keyboard is marketed as full-sized, but the keys are much smaller than you’d expect. Some folks may find the keyboard to be too cramped uncomfortable, but it was fine for me, as I have smaller hands.

The over-sized trackpad is nice and smooth. However, I had one major caveat. It’s difficult to use the trackpad if the laptop itself isn’t on a flat surface. When I was typing to a friend on Discord while lounging in bed, I accidentally triggered the trackpad a couple of times. It’s very sensitive to pressure, so if you’re a heavy-handed typist, you may need to be aware of how much weight you’re putting on or near the trackpad. It’s a little annoying, sure, but not necessarily a deal-breaker. It just limits where you can comfortably use the trackpad, as it’s easy to fire off a few false clicks.

The rear plate, which transforms into a kickstand, is the final attachment. It sticks to the back of the tablet via magnets. When I placed the rectangular plate onto the tablet, it connected cleanly. I was actually impressed with how strong the connection was, as it took some effort to remove it. The kickstand is also plenty rigid and successfully keeps the tablet upright and stable. I should note that the kickstand’s hinge is exceptionally strong and tight. Again, it took some effort on my end to pop open and that’s a good thing.

The wireless USI pen is a cool little device. It comes in the box, which is nice because there’s no additional cost. It’s a magnetic pen that self charges when you stick it to the right side of the tablet. The pen is both responsive and fluid, which is great for note taking or doodling. There are two interchangeable pen tips as well, one being much narrower than the other. I’ve no qualms with it.

The 11-inch IPS 1440p display is just plain lovely. The 3:2 aspect ratio makes it easy to get productivity work done and the 400 nits of brightness is wild, especially for a Chromebook. In other words, it’s bright enough to be seen in an outdoor environment. I’m currently re-watching the first season of Sailor Moon via Amazon Prime Video and although it’s an older show from the 90s, the colors really do pop. Reading comics in tablet mode is a real joy, too. As for the touchscreen, it’s pretty responsive. Scrolling, swiping, and tapping are both easy and fluid.

The port selection isn’t all that impressive, unfortunately. This is likely due to the tablet’s slim profile. There isn’t much room to include USB-A ports, HDMI out, and so on. The only ports you’ll find are on the left side of the tablet. It’s just two USB 3.0 Type C ports. Again, not a lot of ports. However, this isn’t unexpected, as this is a lightweight device that’s meant to be portable. If you need additional ports, you can always pick up an adapter. We’ve got recommendations for the best USB-C hubs and dongles if you need them.

The HP Chromebook x2 is designed with portability in mind, making it a great option for those who travel often. The tablet and accessories weigh about two and a half pounds. But when you remove the detachable keyboard and kickstand, the tablet itself weighs a little over a pound. That’s light enough to hold with one hand, which makes marking up documents or reading the news a heck of a lot easier. I found myself frequently ditching the accessories to use the tablet on its own. I liked being able to hunker down in bed and use the tablet for reading.

The HP Chromebook x2 11 delivers good performance. The Snapdragon 7c is better than the MediaTek processors you’ll find in many low cost Chromebooks, but it can’t compete against something like an Intel i3 (obviously). That said, it’s fast enough for general use like surfing the web, writing papers, and so on. I was able to open up various applications and even play a few lightweight games like Final Fantasy V and Fallout Shelter with no problems. Even when I was scrolling through a busy article on Buzzfeed (gifs and images galore), there was no noticeable lag. This Chromebook is also packing 8GB of RAM (most come with 4GB), which helps with processing speed and web browser performance.

Here are a few benchmark results:

The real star of the show is the 32Wh battery. I used CrXPRT 2’s battery test, which loops video, music, and productivity tasks until the laptop dies. When I ran the test overnight, the 2-in-1 breathed its last breath at the 11 hour mark. That’s more than a full workday. That figure also lines up with what HP claims, too. In terms of real world use, I squeezed about ten hours out of it on a single charge. That’s better than the Lenovo Chromebook Flex 5, which lasted a little over eight hours.

So, should you get the HP Chromebook x2 11? Yes, especially if you’re looking for a premium 2-in-1 at an affordable price point. The 2-in-1 factor makes it really versatile and convenient, as you can use it like a traditional laptop or ditch the accessories and bam, you’ve got a handheld device. Performance isn’t too shabby, either. It’s plenty fast for day-to-day tasks like browsing the web, writing papers, and so on. Plus, thanks to the low-power processor, you can expect the battery to last all day.