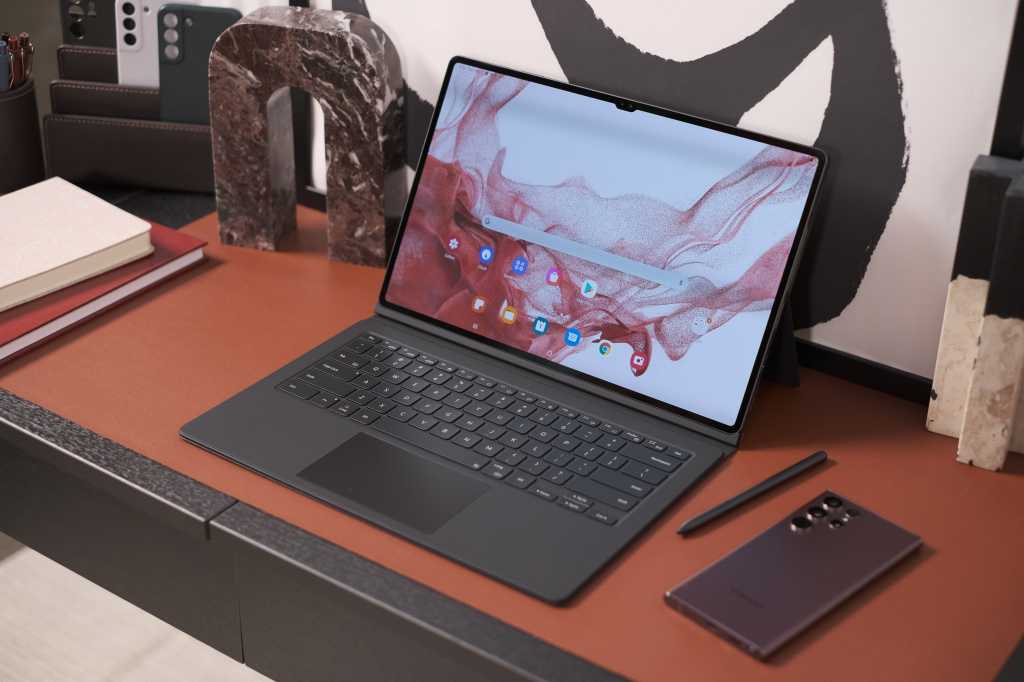 People turn to large Android tablets for streaming and even work, and Samsung’s new Galaxy Tab S8 family of tablets—with screens now up to 14.1 inches—offer massive, detailed displays for both consuming and creating content. While the large panels can feel a little awkward in tablet mode, Samsung’s laptop-like tablet looks absolutely amazing.

Sales of tablets, like Chromebooks, surged during the height of the pandemic in 2020, then dropped—analyst firm IDC reported that tablet sales dropped 12 percent, to 46 million tablets. (IDC is owned by PCWorld’s parent company, IDG.) If it feels like there are few tablets besides those from Samsung and Apple, and Amazon’s Fire, that’s somewhat true, too. Worldwide, Apple dominates the tablet market, with 38 percent market share. Samsung is right behind, with 15.9 percent, then Lenovo and Amazon with 10.0 percent and 7.9 percent, respectively, which helps explain why Apple, Samsung, and Lenovo dominate store shelves.

Several years ago, Android tablets carved out a discrete market—Android apps were only available to Android phones and tablets, and Windows apps only ran on PCs. Now, the line is blurring: Android apps are en route to being natively supported in Windows PCs, and most of Microsoft’s mobile apps exclusively run on Android, not Windows Phone.

Over time, the Galaxy Tab series has continuously improved. The new Tab S8 series retains its strengths (beautiful 120Hz AMOLED screens just under 4K resolution, far better than what you can find on a typical Windows laptop, paired with phone-quality high-resolution cameras) but pushes further into productivity territory with split screens that can now accommodate three snapped apps. There’s an updated Qualcomm Snapdragon 8 Gen 1 processor inside versus the 865 used inside the Tab S7, plus new Wi-Fi 6E support for improved connectivity. Samsung’s Windows-like DeX desktop has slightly improved, too, and Samsung’s optional keyboard covers advance productivity further. Finally, every member of the Tab S8 generation also includes a Samsung S Pen inside the box, with decreased latency.

Specific improvements include the Galaxy Tab S8 (and S8+) camera: Compared to the Tab S7 (8Mpixel front-facing camera, 13Mpixel+5Mpixel ultrawide rear-facing camera), the S8 and S8+ now offer a 12Mpixel front-facing camera and a 13Mpixel+6Mpixel rear camera capable of recording in 4K video quality. There are Dolby Atmos-powered quad speakers, three mics, and noise cancellation, too. Everything else, from the weight, screen dimensions and resolution, and wired I/O, remains unchanged from Samsung’s 7th-gen Tab tablets. (Neither the S8 nor the S8+ offer a model with 512GB of storage any more, however.)

The Tab S8 series can also fast-charge itself to 100 percent in 90 minutes, a feature which is slowly coming to PCs. In a novel twist, the Tab S8 can be used to charge Samsung’s new S22 smartphones by connecting them with a USB-C cable, and Galaxy Bud earbuds can now roam between the two devices as well, pairing as needed.

All this hits some of the PC’s weak points: high-resolution, high-refresh rate laptop PC screens are relatively rare, and the user-facing cameras rarely go above 1Mpixel or 1080p resolutions. Samsung’s new Tabs are important because of those features alone.

We had a chance to go hands-on with the new Galaxy Tab series in advance of Samsung’s Unpacked presentation. A complete list of the available specifications for all three tablets is below.

Hands on with the Galaxy Tab S8

While the 11-inch Tab S8 can be used as a “personal” tablet for content consumption, it’s difficult to see the S8+ and S8 Ultra as anything but laptop replacements. They’re simply too big. Even then 13-inch Surface Pro 8 is ungainly, and the 14.6-inch Tab S8 Ultra is just a massive sheet of glass. Pairing it with a superb 13Mpixel rear camera seems a little absurd, as holding a 14-inch tablet in front of your face is less about taking a photo than it is shading yourself from the sun. It’s a little weird to realize, then, that this massive 14.6-inch slab of glass is a third of a pound lighter than the Surface — and it’s made of Armor Aluminum, which promises to be rugged and more scratch-resistant than the Galaxy S7, too.

Front cameras, though, do matter, especially in a Zoom-centric world. It’s interesting to note that most laptops offers a 1Mpixel user-facing camera, while the Tab S8’s user-facing cameras are all 12Mpixels. And yes, the images and video they capture look great. Why wouldn’t they, from a company that sells phones, often on the strength of the phones’ camera? According to Danielle Moten, Samsung’s senior manager of product management, there are new software controls to disable the camera for privacy’s sake—although, the hardware shutters that some laptops offer are still a superior solution.

What quickly becomes clear is that these new Tabs work best with a keyboard attached. Samsung provides a number of them. What it calls the Book Cover Keyboard, made of “premium antimicrobial polyurethane,” connects to the Tab via a magnetic connection, offering a full-size keyboard and glass touchpad. I found it to be surprisingly good: comfortable and responsive. A separate, detachable portion provides a kickstand that seemed sturdy enough.

Interestingly, the Tab series offers you two ways to work, powered by its One UI Tab 4 user interface. The first, the more conventional way of launching Android apps, allows you to launch a single app across the breadth of the screen, naturally. But you can now fill the screen with three apps—one snapped in portrait mode on one side of the screen, and two smaller landscape windows on the other portion. Interestingly, this is pretty much how I work, with one main screen and two smaller windows across a second display. (I actually use a third display, too.) It’s a fairly natural way to break up several apps across multiple windows. Swiping with three fingers switches between app desktops, too.

I didn’t see as much improvement in DeX, Samsung’s more business-oriented workspace. DeX swaps spanned application windows for more Windows-like windows that can be moved around the screen, and it can now be used in portrait mode, too. The updated version offers more transparency between the windows. I’ll have to try it out more if and when we receive review units.

The inking experience, though, really impressed me. Measuring how well a device inks is a relatively straightforward process, asking three basic questions: Does the ink meet the pen’s nib, or is it offset? Is there noticeable latency? And is there jitter when you ink, producing a wavy line even when using a straight edge? I didn’t notice much latency at all. When inking, however, the inked line wasn’t offset in the slightest. Even more impressively, there was hardly any discernible jitter at all, even inking slowly on a diagonal—far better performance than I’ve seen on any tablet from any manufacturer.

I was unable to test some of the Tab’s other features, such as video playback, how well it connects to a PC as a second screen, and how well the face recognition and fingerprint scanner work. (The fingerprint scanner is mounted in the display on the Tab S8 Ultra and S8+, and in the power button on the S8.) We’ll have to save those things for a review.

At $1,099 (and most likely $1,299 or $1,399 for the versions with increased memory and storage, plus possibly more for the keyboard cover), the Samsung Galaxy Tab S8 Ultra certainly approaches laptop pricing territory. What I found surprising is that the proposition doesn’t seem that far-fetched.