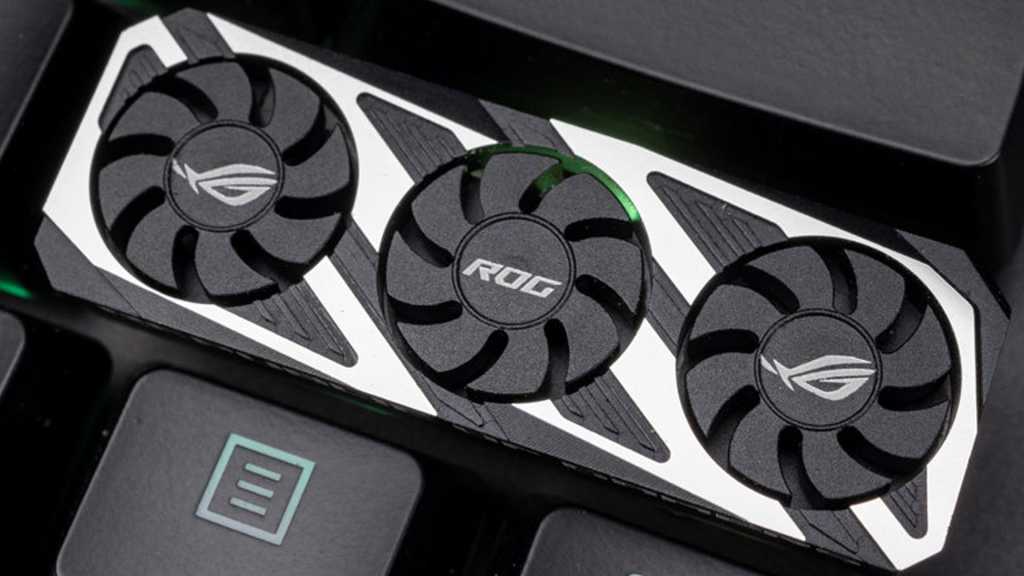 Mechanical keyboard enthusiasts are known for going a bit wild with custom-made, “artisan” keycaps, ranging from full themed keysets like my Star Trek Galaxy Class set, to tiny pieces of fan art like these Pokemon resin caps, to even more ridiculous novelties. But a new keycap that popped up in China this weekend might be of particular interest to anyone who’s been struggling to find a high-end graphics card for the last couple of years.

This apparently official Asus “Republic of Gamers” keycap looks like a teenie-tiny graphics card, sitting there where your right Shift key used to be. Taunting you. Its sculpted, anodized aluminum body is festooned with three scale cooling fans, each resting on a tiny ball bearing so they really spin around. The keycap even comes in its own GPU-style packaging, aping the new card unboxing experience in miniature.

There’s already been a few PC component-themed keycaps made by artisans, including at least one graphics card with a spinning fan. But this more elaborate, branded design seems to be mass-produced to some degree: there’s already one YouTube user showing it off.

The 2.75u-cap is currently available for purchase in China for around 400 yuan ($63), spotted by Tom’s Hardware. For a custom keycap with such elaborate construction and packaging, that’s actually pretty reasonable! We’ve reached out to an Asus representative to see if this is an officially-licensed ROG product — it certainly looks like one — and if it will be coming to wider markets. Asus already sells a set of “gaming” keycaps with a metal Escape key, so it’s not out of the question.

If we get our hands on one, we’ll see if we can somehow get it plugged into a PCIe port.