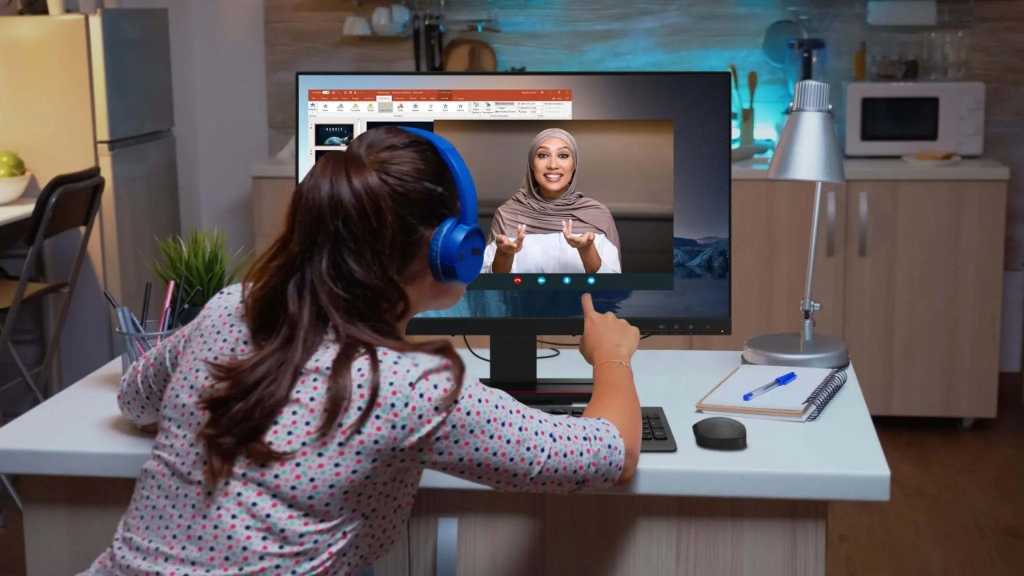 The monitor market is on the cusp of entering a new era of innovation. After two decades relying on a familiar core technology – an LCD panel with an LED backlight – consumer PC displays are making the leap to Mini-LED and OLED technology.

Lenovo is a leader in this space. It was an early adopter of OLED in laptops, the first to bring a 2-in-1 PC with a folding OLED screen to consumers, and is among the few selling a 27-inch Mini-LED monitor right now.

I asked Stefan Engel, Lenovo’s VP & GM of Visual Business, where he thinks PC displays go from here. The answers will leave you eager for what comes next.

More Mini-LED is coming to monitors, and soon

It’s impressive but comes with an outrageously high price tag. The ThinkVision Creator Extreme retails for a truly extreme $3,499, placing it far outside the average consumer’s budget. Luckily, there’s reason to think pricing will come down.

“Lenovo is paving the way for Mini-LED in the monitor market,” says Engel. “For 2022, […] we plan to develop a series of Mini-LED products and monitors to benefit a multitude of commercial and consumer users.”

The key word here is “consumer.” Lenovo’s ThinkVision monitor is a pricey, low-volume monitor for a niche professional market. The same is true of Asus’ high-end ProArt Mini-LED monitors.

Consumer displays are a different story. Engel wasn’t ready to reveal specifics, but I expect the Lenovo’s future consumer Mini-LED displays, while still likely to sell well above $1,000, will be notably less expensive than the ThinkVision monitor.

This isn’t just speculation. Most companies that showed Mini-LED monitors at CES 2022 were unwilling to talk pricing, but two broke ranks: Acer and Monoprice. Acer priced its upcoming Acer Predator X32 FP Mini-LED gaming monitor at $1,799. Monoprice beat that by a mile, announcing its 27-inch Mini-LED will sell for $999. To be frank, Lenovo must lower pricing to compete with Acer and Monoprice.

In any case, pricing is headed in the right direction. Asus’ ROG Swift PG32UQX, my personal favorite gaming monitor of 2021, arrived with an MSRP of $2,999. Samsung’s super-ultrawide Odyssey Neo G9 hit stores at $2,499. It appears new Mini-LED monitors expected in 2021 will shave a thousand, or more, off the price.

Mini-LED could also be coming to gaming laptops (and more)

High-end PC monitors were not Mini-LED’s only success story in 2021. They also came standard on Apple’s MacBook Pro 14 and 16. It’s hard to argue with the results. The new MacBook Pro models have a display brighter and more vivid than any PC laptop, including those with OLED.

I asked Engel if Lenovo will be bringing Mini-LED to laptops, and though he declined to name any specific models, he hints they’re in the works.

“For what’s next in laptops, Lenovo is dedicated to optimizing its immersive visuals, particularly within gaming markets,” said Engel. “So, I’d imagine panel improvements, like up to Mini-LED display and performance upgrades for avid gamers, could be offered in the not-too-distant future.”

Engel’s comments focus on gaming, which makes sense. Excellent HDR performance is a key advantage of Mini-LED, but the Windows desktop (and everything you do in it) is designed for SDR.

Gaming and streaming are where Mini-LED literally shines, leaping ahead of OLED with unmatched brightness. Games also benefit from Mini-LED’s improved contrast which, though not as good as OLED, is far superior to a traditional edge-lit LCD.

Burn-in remains a limitation for OLED

The debate over OLED burn-in remains a controversial topic. It can also be frustrating to cover, as executives often play coy asked about the issue. I was surprised, then, by Engel’s frank response when I pressed him on how Mini-LED and OLED compare.

“Of note, OLED has low durability, specifically called burn-in,” says Engel.  “OLED quality may be degraded, with a shadow on the image, after long-time usage.”

Engel was quick to clarify this problem doesn’t invalidate OLED, as should be obvious from Lenovo’s early and continued commitment to the technology. Instead, Engel believes use case is key when deciding which is best.

“As a rule of thumb, I’d say if you’re a designer and work with rather stable content on your screen, go with Mini-LED. But if your world is all ‘moving content’ like video, go with OLED,” says Engel.

He also points out Mini-LED isn’t perfect. The technology’s critics often leap on its “blooming” or “halo” issue, which causes a halo of brightness around small, bright objects on a dark background. This downside will remain a trait of Mini-LED for the immediate future. Enthusiasts must decide for themselves if long-term durability or pixel-perfect contrast is the priority.

What about OLED, anyway?

Engel’s most revealing comments were about Mini-LED. When asked whether Lenovo plans to bring a QD-OLED display to market in 2022, as will Dell and Samsung, Engel declined to offer specifics, saying only that Lenovo adds new options when it can “find the right space” in its product line. Engel was similarly vague about the future of Lenovo PCs with flexible OLED displays, a category Lenovo pioneered with the X1 Fold.

Does that mean Lenovo will focus less on OLED in the future? I doubt it. OLED has proven successful in Lenovo’s laptops, offering a high-end display option that’s superior to a standard edge-lit LCD display. Instead, I read Engel’s lack of comment on OLED to mean the company will move forward on multiple paths.

This will be true of the entire industry. As I wrote in November of 2021, OLED displays face headwinds due to high production costs, especially for the 24-inch to 32-inch panels in desktop monitors.

However, this will ease into 2024 and 2025 as a new generation of OLED fabrication comes online, giving OLED the opportunity to strike back. By then, consumers will likely have dozens of Mini-LED and OLED monitors to choose from.

Engel’s comments show the PC monitor display market is headed in a new direction. Change won’t happen overnight, and pricing for new Mini-LED and OLED monitors will be relatively high for the foreseeable future. Still, it’s obvious monitors are about to become much, much better – and Lenovo hopes to be a leader in this revolution.