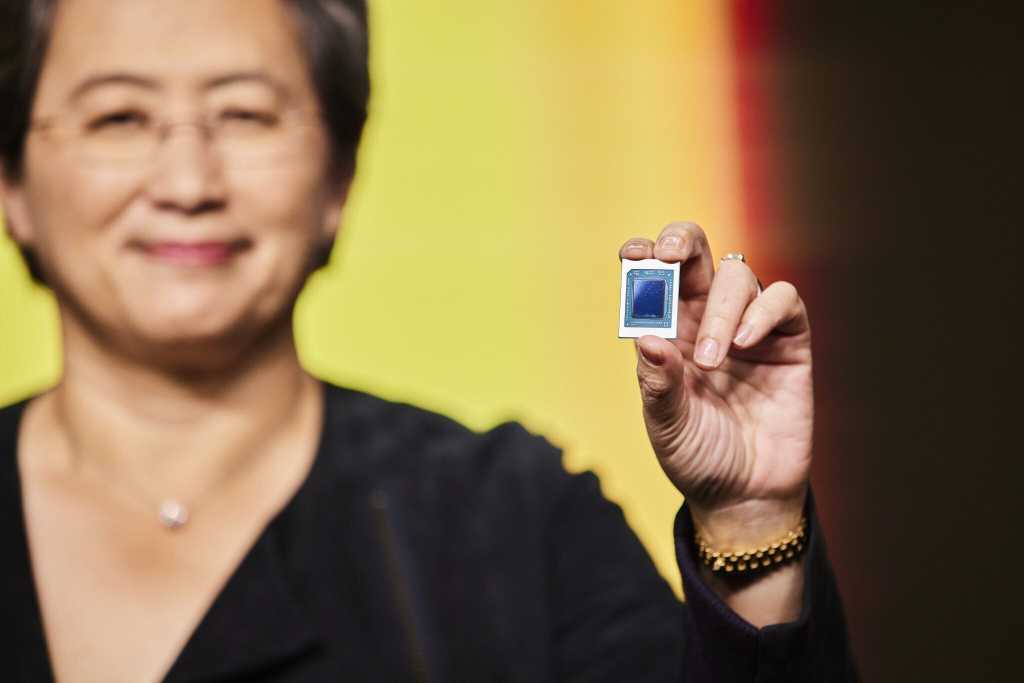 We know AMD’s mobile Ryzen processors can deliver top-tier performance. AMD’s goal for its new Ryzen 6000 Mobile processor was slightly different: optimize it for power efficiency, extending its reach into a mainstream laptop anyone could buy.

Today, we now know a bit more about AMD’s goals for the Ryzen 6000 Mobile processor, including fuller details about the Radeon 680M and 660M—the integrated RDNA 2 cores found within the Ryzen 7/9 and the Ryzen 5, respectively. Although AMD provided some of its own test data, we learned a lot more from our Ryzen 6000 Mobile review, which put the new chip through its paces.

For years, Intel dominated mainstream notebook PCs as well as premium offerings. The recent AMD Ryzen 4000 and 5000 mobile chips changed all that. Today, AMD has pushed into the high end of premium notebooks, capturing what AMD chief executive Dr. Lisa Su has called “revenue share”—higher sales volume in the lucrative premium notebook section. With its new chip, AMD is attacking Intel on a new front: performance per watt, which has gained more prominence in a world that now includes the Apple M1 chips and Arm PCs. Mainstream PC buyers want more battery life as much as more performance. If AMD can succeed, Ryzen notebooks can be all things to all people, and help the company capture a greater share of the notebook market.

“Users want thinner laptops, lighter laptops, cooler laptops, longer battery life laptops, they don’t want big and heavy systems that are chained to a desk,” Robert Hallock, director of technical marketing for AMD, said in a briefing for reporters. “They also don’t want to buy an ‘only good at one thing’ notebook. They don’t want to buy a notebook that’s just a gaming notebook. They want a system that flexes from work to play. So as we think about those design goals, that also drives in a set of very specific performance per watt targets” as well as other characteristics, he said.

“Thinner and lighter is the preference in the market,” Hallock added.

What AMD is talking about should certainly perk up your ears. A Ryzen notebook with 24 hours of battery life? Hallock said that’s coming, though he wouldn’t say by which manufacturer or when. Remember, the new Ryzen 6000 Mobile processors skipped a generation and have launched with AMD’s RDNA2 GPU architecture inside. Performance-wise, that’s good news too. At the high end, AMD believes that the combination of the 6980HX and its integrated Radeon 680M GPU means that “you can play pretty much every game out there in full 1080p,” according to AMD.

AMD believes so much in terms of performance per watt that it even released a benchmark showing the Ryzen 6000 Mobile being outperformed by its competition. While the Core i9-12900HK yielded a score of 6,894 on the multithreaded Cinebench R20 benchmark compared to the 5,733 score generated by the new Ryzen 9 6900HS, AMD still counts it as a big win: The Core i9-12900HK consumed 110W, while the Ryzen 9 consumed 35W. That equates to 2.62 times the power efficiency, AMD said.

“Every design has performance changes and power changes,” Hallock said. “But in Zen 3+, we didn’t make pipeline changes. We didn’t make instruction set changes. Everything you see in terms of performance increases is power derived and we’re extracting a lot of that additional performance per watt.”

AMD talked up the traditional performance metrics in January, but shifted to an emphasis on power in a briefing with reporters in advance of today’s launch. Here, there’s one tweak that PC enthusiasts should know about: AMD’s new Power Management Framework.

You’re probably aware of Windows 10’s power slider, and the similar drop-down “power mode” menu option within Windows 11. Put simply, the new Power Management Framework tweaks that, taking some of the control out of your hands and giving it back to an algorithm within the firmware that will ship with AMD’s Ryzen 6000 Mobile processor. That firmware will look at various signals from the laptop—performance, power, how warm the laptop is getting under your hands, the acoustics—and dial the laptop’s clock speed either down or up, depending on the algorithm’s dictates. AMD executives said that the PMF will engage automatically at Windows 11’s default settings. However, you can manually turn it “off” by shifting the Windows 11 drop-down menu to either a “best performance” or “best battery life” setting, they said.

(The Power Management Framework is different from AMD’s SmartShift Max, or Smart Access Graphics, which shifts power and rendering responsibilities between the integrated and the discrete GPU.)

It’s one of the many ways in which AMD tweaked the power consumption of the Ryzen 6000 Mobile. “We went whole hog in the Ryzen 6000 series,” Hallock said. “We changed everything from transistor to platform and everything in between.”

The specifics of what AMD did may be too fine-grained for some, but here’s a quick summary: AMD moved from a 7nm TSMC process in the Ryzen 5000 series to a finer 6nm process in the Ryzen 6000 Mobile series. Essentially, the 6nm technology facilitates the transition to EUV technology, the next-gen lithography technology, and reduces manufacturing costs by simplifying the process and making the chip physically smaller, as well. The Zen 3+ core—the “+” stands for “efficiency,” Hallock said—includes deeper control over every instruction thread level and clock.

This includes a “PC6” power state, where the entire chip is essentially turned off except for the security coprocessors and a link to the display. Idling the chip in this extremely low-power state can save quite a bit of power, Hallock said—so much that AMD designed hardware accelerators to get in and out of it quickly. (Think of it like a hybrid car shutting off its engine at a stoplight.)

At the chip level, AMD did things like push the Infinity Fabric that connects the SoC’s blocks down to lower-power sleep states, and moved the display controllers onto their own power platform so they can be shut down or powered on independent of the graphics subsystem. From a display standpoint, AMD can use something called SVI3, for more granular display power control, or new Z-states, for similar power management. The display can be managed as well, to reduce the refresh rate during full-screen video playback, or use what AMD calls FreeSync Panel Self Refresh Selective Update (PDR-SU), which doesn’t update the whole screen if there’s a portion of the UI that remains constant.

“There’s many different types of power management you can do—better power states, there’s reducing active power, reducing leakage, optimizing your [voltage-frequency] curve, but the last kind is taking advantage of these very small moments in time,” Hallock said. “Let’s say a user scrolls through a web page. They’re not just continuously scrolling. There is a point where they start to read something. And that might only be you know, quarter second, a second long. What if you can drive your power states deeper and deeper in those very brief windows?”

Low power can equate to more performance, too

AMD’s power argument also plays into its performance message—specifically that a thinner, lighter, AMD-powered notebook will be as powerful as a competing Intel laptop running at a higher voltage. Here, AMD’s argument is that at low power (say, 15W) it will deliver substantially more battery life than the previous generation—up to three more hours of battery life. Essentially, AMD is arguing that its 15W chips can outperform Intel’s 25W chips, and substantially beat Intel at the same TDP.

We’ve included two representative graphs below, though it’s important to note that AMD is comparing the Ryzen 6000 Mobile against Intel’s 11th-gen Core chips, and not its new 12th-gen Alder Lake parts. For that, you can refer to our AMD Ryzen Mobile 6000 review, out today as well.

From a platform perspective, AMD’s Ryzen 6000 Mobile processors will support USB4, the corollary to the Thunderbolt technology Intel uses. According to Scott Swanstrom, corporate vice president of client system design engineering for AMD, AMD is working to certify its solution for Thunderbolt, but it isn’t there yet. Swanstrom also mentioned that though the Ryzen Mobile 6000 does not support DDR4 memory, there will be other “upgraded” processors AMD will offer that will. AMD also didn’t integrate a wireless 5G MAC into the Ryzen 6000 Mobile, but corporate fellow Joe Macri said that AMD is working with companies that provide those solutions.

Interestingly, AMD also built its own dedicated noise-reduction logic into the Ryzen 6000 Mobile chip itself. It’s an acknowledgment, after the work-at-home trend of the last two years, that end users need productivity enhancements as well as performance.

In terms of graphics, AMD’s Ryzen 6000 APUs will be powered by the Radeon 680M—12 CUs, running up to 2.4GHz, with four rendering back-ends—and the 660M, with 6 CUs, running up to 1.9GHz, and two rendering back ends. AMD presented data comparing them to an Nvidia GTX 1650 Max-Q—which suggests that AMD expects its GPU to compare to Nvidia’s 2019 mainstream GPU that powers laptops like the HP Envy 14.

AMD’s argument is that when you add AMD FidelityFX Super Resolution or AMD Radeon Super Resolution (available later this spring) image upscaling technology, AMD’s integrated GPUs within the Radeon 6000 Mobile will surpass even some discrete GPUs. We can’t test that quite yet, so we have to show you what AMD estimates those technologies will yield in terms of additional performance. Note that AMD generated these numbers using “Low”-quality graphics settings. While games may be playable at 1080p resolutions with AMD’s Ryzen 6000 Mobile, a discrete GPU will still be preferred.

AMD also believes that its integrated GPU core will vastly outperform Intel’s own 12th-gen integrated graphics, too. (Our review proves that out, with the Ryzen 9 6900HS besting Intel’s Core i9-12900HK in the 3DMark Time Spy test with just integrated graphics running, 2,443 to 1,838.)

AMD has slowly climbed out of the deep well it dug for itself during the “Bulldozer” generation. Its first Ryzen chips re-established AMD in the desktop space, and subsequent generations convinced consumers and PC makers that it wasn’t a one-shot effort. The Ryzen 3000 and 4000 mobile parts, Threadripper, plus its Epyc server processors, helped give the company some financial breathing room. AMD now has the option of using either price, performance, or power—or a combination of all three—to convince PC makers that they should be building around the Ryzen processor. It’s a significant strategic inflection point for the company.

AMD has steadily gained share in the notebook market—21.6 percent in the fourth quarter of 2021, according to Mercury Research—but it’s been exceedingly difficult for AMD to escape the 80-20 ratio of the PC processor market that’s always favored Intel. Finally, AMD’s Ryzen 6000 Mobile could be chipmaker’s chance to break free from those shackles.