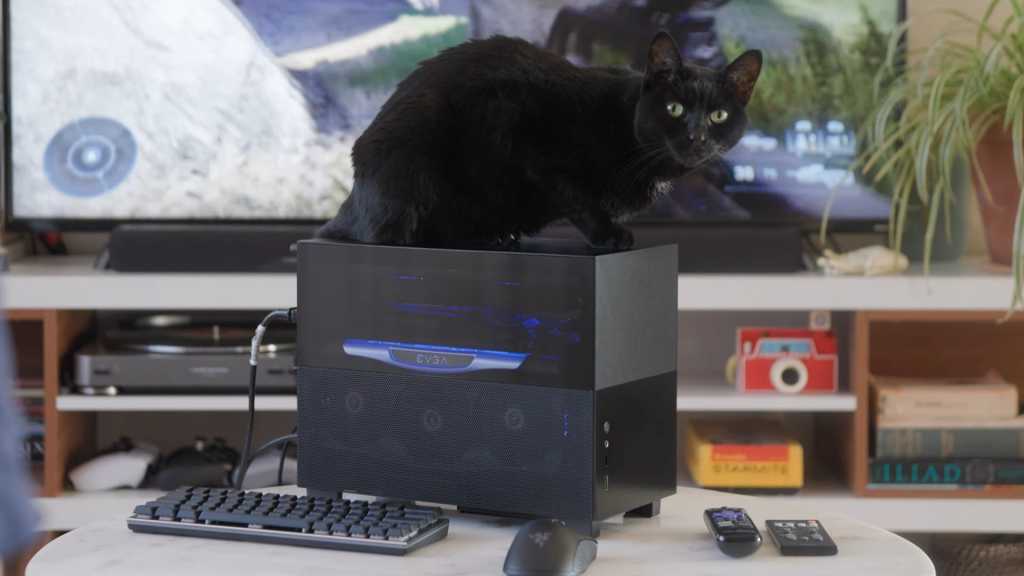 If you’re considering building a tiny gaming PC using the mini-ITX format for motherboards and cases, there are a few things you should know before you start. Take it from Adam Patrick Murray, who did just that over on the official PCWorld YouTube channel. You can follow his journey, starting with the live-streamed build of his teeny-tiny living room PC and finishing with his thoughts after using it for several months.

Adam used the popular and stylish Lian-Li Q58 enclosure for this build, which shoves everything into just 14.5 liters of volume but can still accommodate high-end graphics cards and cooling. The system is a Ryzen 5 5600X build with a B550 motherboard, paired to a beefy-but-not-insane GeForce RTX 3070 GPU with a stylish Corsair iCue H100i Elite LCD liquid cooler.

You can go through the marathon live-build if you want to see every delicious minute of PC-building action, and you should definitely check out Adam’s full video of thoughts after using his tiny titan for several months. But if you have a schedule to keep, here are some of the most crucial takeaways from Adam’s experience.

Cable management is a hassle

Cable management can be the most finicky part of any desktop PC build, even on a full-sized machine. When you’re building a gaming computer barely bigger than a shoebox, it can be a nightmare. After hearing the “bzzzzzz” of fans scraping cables and struggling to close the stylish hinged panels of the Lian-Li case in the live build, Adam decided it was time for some radical reorganizing.

After literally hours of trials and tinkering, he ended up with a clean build with plenty of clearance for the fans in the AIO and graphics card. That didn’t come without some compromises. He had to remove every unnecessary cable (including disassembling the USB-C port from the front panel!) and shove all the slack into the tiny cavities of the case that aren’t visible from the side. The moral of the story: Be prepared to sink a lot of time into cable management with a small form factor PC, and search for a few unconventional solutions.

You don’t need to sacrifice performance

In testing the Ryzen 5-RTX 3070 combo in the tiny case, Adam was surprised to find that there’s not really a performance hit to shoving all of that hardware into a tiny space. As long as it’s well-ventilated — and with huge mesh panels, the Q58 case certainly is — you can play even high-intensity 3D games with just a few extra degrees on your temperature monitors.

Adam never hit the danger zone in terms of temps, even when he swapped in a more powerful GeForce RTX 3080 card. He was aiming for 4K resolution and 60 frames per second for playing on his television, so those who want even higher framerates on insane “esports” monitors might be better-served by a more conventional PC build. But everyone else might be able to swing a smaller build, assuming they don’t need the extra space for PCIe expansion or massive hard drives.

Fan noise is a little high

In the same way that you can’t build a car that carries 12 people and can hit a 10-second quarter-mile, you can’t build a desktop PC that does everything. While Adam’s SFF build can handle pretty much anything (except a USB-C connection on the front), it does come with some compromises. Cooling all those high-powered parts in close proximity requires a lot of airflow, and with a pint-sized cases, that leaves no room for sound damping.

The result: Adam’s SFF build is a noisy little fella. While it’s certainly possible to build PCs that are both tiny and quiet, we really don’t have the capability to do that for something that can play high-end 3D games, short of ultra-complex liquid-cooled solutions. Maybe. Heck, even game consoles — which are now getting bigger than the average SFF build, running on some of the same hardware! — need some pretty intense active cooling.

All these insights can be handy if you’re going into a small form factor build without any experience. But whether you’re a newcomer or an old hand, it couldn’t hurt to brush up with PCWorld’s step-by-step system building guide before you break out the screwdrivers. And be sure to subscribe to PCWorld’s YouTube channel for more videos like this (and a whole lot more).