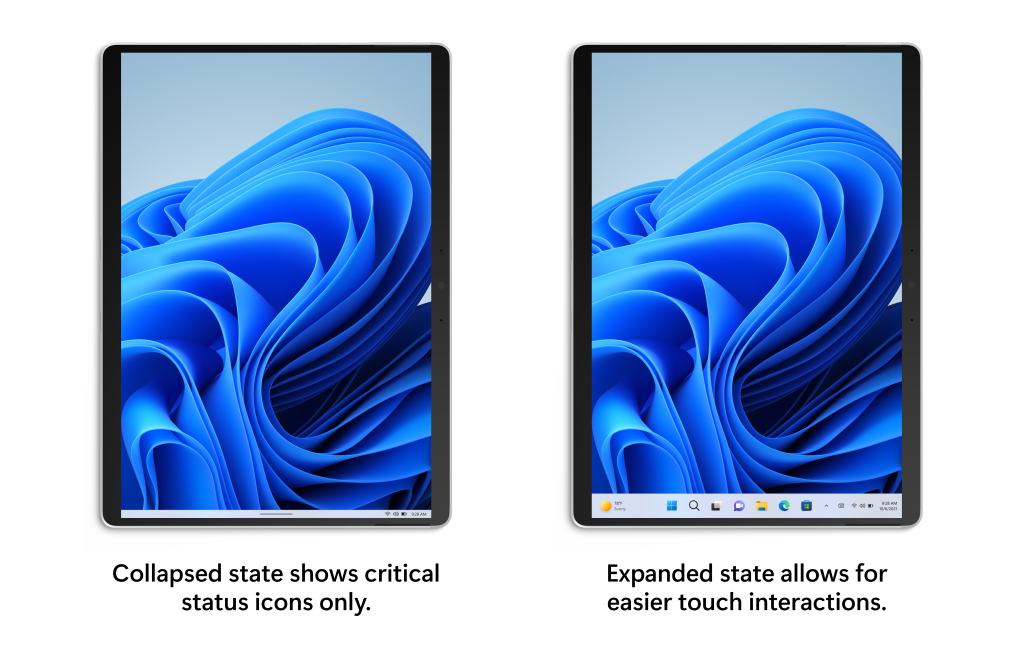 Windows 11 has continued to tack away from its launch state, issuing new features that are mainly course corrections from its initial approach. Windows 11 Insider Preview Build 22563 is a case in point, bringing fixes to the taskbar for tablets and an improved Widgets experience.

Build 22563 makes a welcome change. One of the concerns with a tablet is how easily you’ll inadvertently click something you didn’t mean to. In the new build, the taskbar slims down into just a tiny ribbon at the bottom of the screen. If you swipe up, it expands into a more easily navigable area. Yes, it’s a second click, but it’s like sliding a utility knife back into its sheath when it’s not in use—you’re trading a bit of inconvenience for additional safety.

The changes to Widgets are more subtle—and, if we’re being honest, probably more discernible once we get some hands-on time with the new build.

“We’re trying out some changes in Widgets to bring more dynamic content to your Widgets board, by experimenting with bringing together the widgets and news feed experiences as a dynamic blended feed containing both widgets and news content,” Microsoft said in a blog post. “This should make it easier for you to discover and engage with new widgets and news content through your feed. With a dynamic feed there’s less of a burden on you to curate the canvas on your own, but you’ll still be able to pin your favorite Widgets to the top if you want.”

From the illustration Microsoft provided, there really don’t appear to be substantive changes to Widgets before and after the new build:

Instead, it looks like Widgets is being made more flexible, so that you’ll discover and add new widgets to the feed. Note that the “add widgets” button appears to have moved to the top, where there’s now a small “plus” icon that appears next to your avatar icon.

Microsoft also made some other small changes. The first appears to be a continuation of Windows 10’s behavior in Snap Assist. If you snap an app to one side or a corner of the screen, Windows suggests other apps to fill the space. Now, the first three “apps” Windows 11 suggests will be your most recent three tabs opened within Microsoft Edge, then other apps. Microsoft says that you’ll be able to control this behavior via the Alt+Tab controls: Settings > System > Multitasking inside the Settings menu.

Microsoft has also changed the search behavior in Quick Access, the search bar at the top right of any File Explorer window. Now, in addition to searching files stored locally on your PC, Windows will add a search of your OneDrive content as well.

Starting with this build, Windows Insiders can now use 37 new emoji characters in the emoji picker as part of Emoji 14.0, the company added. They include “troll,” “melting face,” and “mirror ball” emoji.

Technically, these improvements are all part of the Dev Channel, so Microsoft is under no obligation to bring them to the stable channel of Windows. But these feel like fixes that you’ll see soon, regardless.