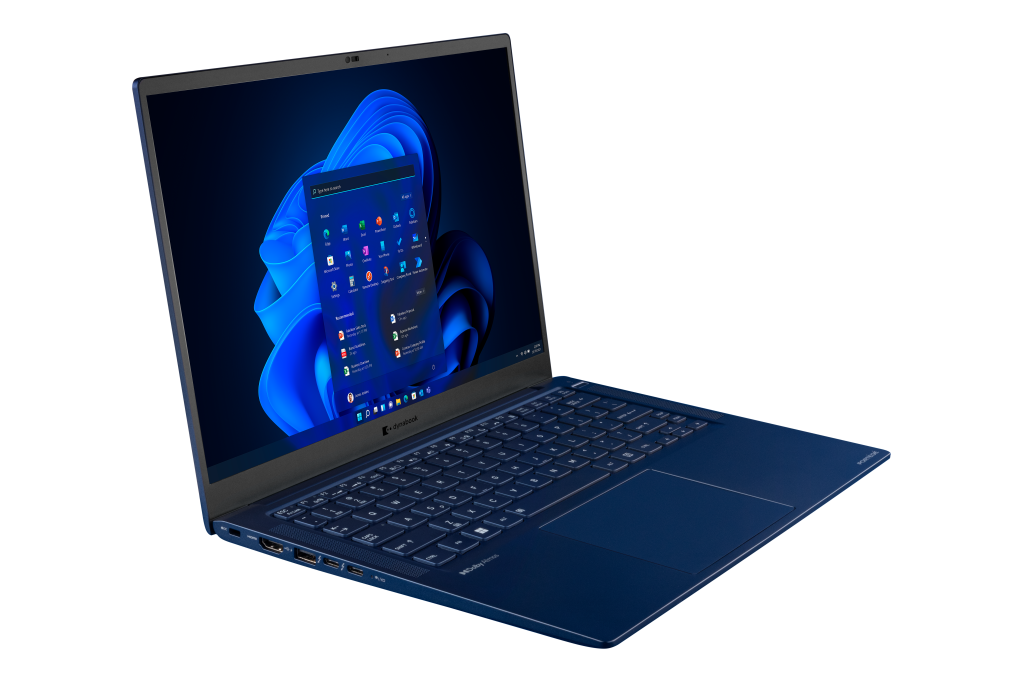 Toshiba’s legacy as a PC company, Dynabook, has carved out a niche for itself as a vendor of ultralight business notebooks. Dynabook’s legacy continues with a handful of new Portege premium laptops, all hovering around two pounds.

At MWC 2022, Dynabook announced four new Windows 11 notebooks: the Portege X30L-K and the Portege X40L-K, plus the Portege X30W 2-in-1 convertible. All of them feature the new 12th-gen Intel 28W “Alder Lake-P” processors that Intel recently introduced, together with some Intel technologies that accompanied the launch, such as AI noise reduction. The 720p laptop webcams (with privacy shutters) will also include face framing, lighting correction, and background blurring that’s governed by the laptop itself, and smart charging capabilities that prevent the battery from being overcharged.

None of the laptops include WWAN 5G/LTE options; Dynabook executives said they saved cost by not certifying the laptops with U.S. carriers, as customers weren’t asking for it. On the other hand, all three laptops ship with a three-year warranty.

Dynabook’s Portege X30L-K includes the choice of Intel processors, both in standard (the Core i5-1240P and Core i7-1260P) and vPro (the Core i5-1250P, Core i7-1270P and Core i7-1280P) along with options ranging up to 32GB of LPDDR5 dual-channel memory and SSDs up to 1TB. The device is a secured-core PC, meaning that the device’s firmware is secured. It’s physically secure, too, with a security lock slot and a MIL-STD-810H rating enabled by its magnesium alloy chassis, as well as the aforementioned webcam shutter.

Port selection includes a pair of Thunderbolt 4 ports, a second pair of USB 3.2 Gen 1 Type A ports for legacy devices, an RJ45 Ethernet port, an unspecified HDMI port, and a microSD card slot.

If you need a slightly larger device, Dynabook offers the X40L-K, a 14.0-inch clamshell that offers slightly more resolution than the X30L-K at 1920×1200. It weighs 2.31 pounds. It also carries the Evo label, the brand Intel designed for premium laptops. Pricing begins at $1,799.99.

There are the same 12th-gen Core processor options inside, including the vPro chips, and the same memory and storage options, too. It all appears almost identical to the smaller laptop, with a couple of exceptions. First, the X40L-K contains four speakers (two facing down, and two up) while the smaller X30L-K boasts only two. The battery, as you might expect, is also larger. Instead of the 53Wh battery on the smaller device, the X40L-K includes a larger 65Wh battery.

If you need a business notebook that supports inking, you’ll want to buy the Dynabook Portege X30W, a 13.3-inch 2-in-1 convertible. It’s only very slightly heavier than some of the other devices Dyanbook offers, at 2.18 pounds. It also carries the Intel Evo badge, indicative of a laptops that was co-engineered by engineers at both Intel and Dynabook. Pricing for the X30W (also referred to as the X30W-K) begins at $1,599.99.

The Portege X30W 2-in-1 uses Intel’s 12-gen Core Alder Lake-P processors, all encased within a magnesium alloy chassis that allows for MIL-STD-810H drop protection. The devices all include a TPM 2.0, a fingerprint reader, and also offer secured-core PC protections. It also ships with Dynabook’s TruPen for digital inking.

There’s also an unexpected addition: The Dynabook Thunderbolt 4 dock, which contains a nice collection of legacy display ports if your desk hasn’t upgraded to a pure Thunderbolt display. There’s a pair of DisplayPort 1.4 and HDMI 2.0 ports, an upstream and a downstream Thunderbolt 4 port, four USB 3.2 Type A ports, plus two USB 3.2 Gen 2 Type C ports as well. Even better, the new dock outputs a substantial 90W as well, which should power the Dynabook notebooks and then some.