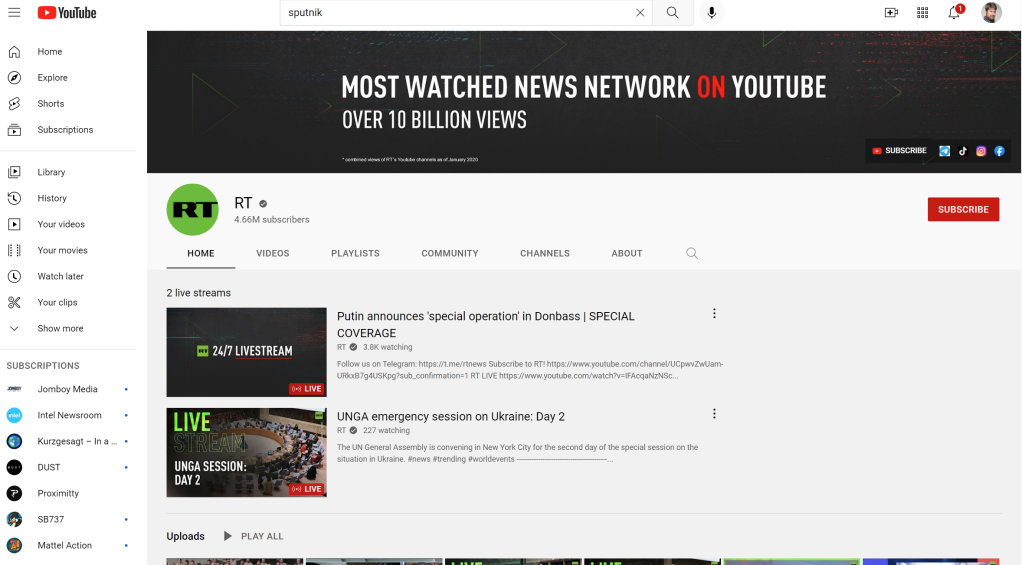 Google followed Microsoft’s actions to limit Russian propaganda by announcing Tuesday that it would block Russian state-owned channels on YouTube within Europe and also crack down on “deceptive practices” elsewhere on the site.

Google said it would block the channels Russia Today (RT) and Sputnik, both operated by the Russian government, across Europe. “Connected” channels, such RT America, RT Live, and RT Sport MMA, will also be blocked. Correction: Google said that it would only block the YouTube channels across Europe. A previous version of this story implied that the block would be worldwide.

While Google said that it intends to block Russian state-sponsored propaganda on its video feeds, it’s not clear that Google is taking the same actions as Microsoft. On Monday, Microsoft said that it would block news from Sputnik and Russia Today, both owned by the Russian government, from its search results and its Start news feed. On Tuesday, Google said only that it has “significantly limited recommendations globally for a number of Russian state-funded media outlets across our platforms,” without saying whether that includes search results or not.

Google said Tuesday that its actions added on to its existing de-monetization of Russian state-funded media. Google also said that it is working to make “reliable and trustworthy information readily available.” “When people around the world search for topics related to the war in Ukraine on Search or YouTube, our systems prominently surface information, videos, and other key context from authoritative news sources,” the company said in a blog post.

However, Google has also declined to withdraw its services from Russia. Google said that it would continue to operate in Russia, while promising to comply with sanctions requirements. Google Search, Maps, and YouTube remain available in Russia, “continuing to provide access to global information and perspectives.”