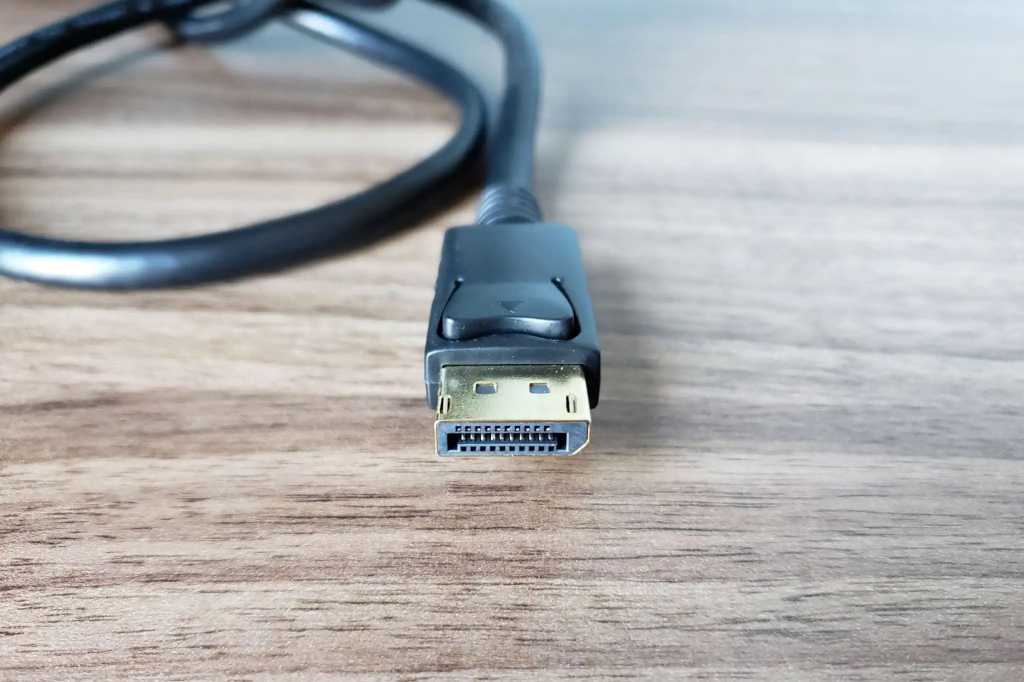 The Video Electronics Standards Association (VESA) has announced a new DisplayPort certification called Ultra-High Bit Rate (UHBR) for DisplayPort 2.0. It establishes two levels of certification, DP40 and DP80, that mark cables as capable of up to 40 and 80 gigabits of data, respectively.

VESA intends this to clear confusion, but I’ll bet it has left you scratching your head. Here’s what UHBR means for you.

What is DisplayPort UHBR?

DisplayPort Ultra-High Bit Rate (UHBR) is a set of transmission modes included in the DisplayPort 2.0 standard. It comes in three flavors.

UHBR promises a certain minimum bandwidth per DisplayPort lane. DisplayPort 2.0 has four lanes, so effective bandwidth in use is four times what each UHBR transmission mode provides. Here’s the breakdown.

Video requires bandwidth, like any other data, so more bandwidth translates to support for higher video resolutions and refresh rates.

What is UHBR certification?

The DisplayPort 2.0 standard provides for the UHBR transmission modes listed above, but that doesn’t mean devices and cables need to support them all. Each DisplayPort device maker decides the speeds their device can handle.

That’s where VESA DisplayPort UHBR certification steps in. It will certify that DisplayPort cables, video sources, and displays can handle a minimum bandwidth. The program covers two certifications.

Notice there’s no DP54 certification, which would be the equivalent of UHBR 13.5. VESA has decided not to certify it separately, instead noting all DP80 cables can handle UHBR 13.5.

What does UHBR mean for resolution and refresh rate?

The UHBR certification is meant to simplify buying a DisplayPort 2.0 cable, but it doesn’t make any specific promise about supported resolutions and displays. This is likely because the variety of use cases DisplayPort can handle is too complicated to reduce to a single figure.

These figures are for uncompressed video. The use of Display Stream Compression (DSC) can bump DP80’s maximum resolution to 16K at 60Hz.

Does UHBR apply to DisplayPort over USB-C and Thunderbolt?

The DisplayPort Alternate that’s option for USB-C, and mandatory for Thunderbolt, complies with the same DisplayPort standards as a typical DisplayPort cable. It can implement UBHR, and devices using it can be certified for DP40 or DP80 in the same way.

However, the current maximum data speed of USB-C 4 and Thunderbolt 4 is 40 gigabits per second, so DP80 certification is out of reach.

How does this compare to HDMI 2.1?

DisplayPort’s UHBR certification could be interpreted as a response to recent controversy surrounding HDMI 2.1.

The HDMI Licensing Administrator recently “retired” HDMI 2.0, which is “superseded” by HDMI 2.1a. But this doesn’t mean all new HDMI devices and cables have the full maximum capabilities of HDMI 2.1a. Instead, HDMI 2.1a now encompases a range of capabilities defined by the previous specification.

Confusing, right? Those who need high-performance HDMI 2.1a cables can at least look for “Ultra High Speed” cables, which must support at 48Gbps of bandwidth, but there’s no such shortcut for devices. It’s hard to know if a TV, monitor, or PC supports the features and bandwidth you want.

Still a bit confused about DisplayPort UHBR? Here’s the breakdown.

Most people can grab any DisplayPort 2.0 cable (certified or not) and have a fine time. DisplayPort has the advantage of being overbuilt. Even DisplayPort 1.2 can handle 4K at 60Hz or 1440p at up to 144Hz.

But if you want to connect a cutting-edge 4K/144Hz monitor, a monitor with a resolution beyond 5K, or you plan to daisy chain multiple DisplayPort monitors, you should keep an eye out for DP40 and DP80 certified cables. These will guarantee the bandwidth you need.