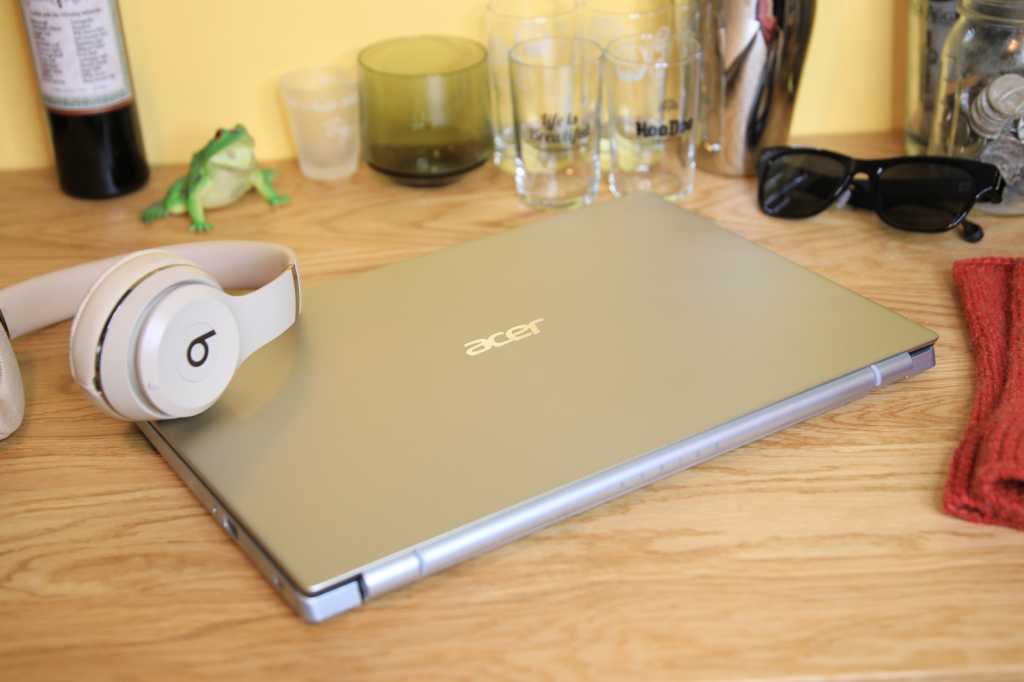 With its affordable price, decent performance, and robust build, the Acer Aspire 5 is a great budget option for most people.

Are you in the market for Windows laptop? Don’t want to spend more than $500? Then an Acer Aspire laptop is likely near the top of your list. Aspire laptops routinely take the top slot in Amazon’s list of best-selling laptops with some models dipping as low as $369.99. The model we tested for this review is the best of both worlds. It’s reasonably priced and it delivers pretty good performance.

Enter the Acer Aspire 5. This laptop packs an Intel Core i5 processor and 8GB of RAM, and is among the most expensive in the Aspire line. But that doesn’t mean it’s expensive. It has a suggested MSRP of $499.99 and sometimes retails for as little as $479.99. A Windows laptop with a recent Core i5 processor for less than $499.99 might seem too good to be true. Acer certainly makes sacrifices to achieve it. Still, the Aspire 5 is a competent and enjoyable laptop.

As mentioned, Acer delivers the hardware at rock-bottom pricing. A quick tour of Amazon shows that alternatives from HP, Lenovo, and Dell are typically more expensive, with most entry-level models slipping between $499 and $599. Acer has an advantage with budget shoppers, but does that hold up under close inspection?

The Acer Aspire 5 is what you get if you show up at Jo-Anne Fabrics and order 14 inches of laptop. They’ll roll it out, cut it, roll it back up, and hand it to you in a tall paper bag. It’s up to you to iron out any wrinkles once you get it home.

What the laptop lacks in flair is excused by its solid, durable feel. I’ll even admit the laptop has something in common with a would-be suitor on The Bachelorette: it’s generic, yes, but admittedly handsome. The silver-and-black trim is businesslike and the black keycaps look attractive.

Well, there is one quirk. The display lid is slightly more bronze than the rest of the laptop. It’s not that noticeable in real life, though the difference is plain in photos.

The laptop comes in at .71 inches thick and 3.75 pounds. It’s no featherweight, but it will easily slip into most laptop bags and is light enough that you can forget you’re carrying it at all. The power adapter is small and will slip into a small pocket on a backpack, messenger bag, or purse.

The Acer Aspire 5 has a great keyboard. The key layout is spacious and individual key travel is significant. Key feel is a bit vague but not so bad as to spoil the experience. I spent hours typing and found it to be quick, accurate, and comfortable. So long as the lights are on, at least.

The keyboard lacks a backlight. This isn’t uncommon in the $500 price bracket, but still worth noting, as it makes the laptop difficult to use in a dark room.

The touchpad surface, which measures about 4.25 inches wide and 2.5 inches deep, is typical for laptops in this price range but cramped next to more expensive machines with larger touchpads. Windows multi-touch gestures, such as using a five-finger pinch to minimize all open windows, can be hard to use because of the lack of space. The surface feels identical to the surrounding palm rest as well, so my fingers often had to hunt for it.

You’ll enjoy the Acer Aspire 5 most when it’s on a desk with an external mouse attached. This will let you enjoy the solid keyboard and ignore the lackluster touchpad.

The Acer Aspire 5 packs a 14-inch, 1080p display with a matte coat. It’s basic, but not unremarkable, as it’s at once better and worse than expected.

Let’s start with the bad. The display has a limited color gamut, coming in at just 64 percent of the sRGB scale. Color accuracy is a bit worse than average as well, though not awful. The narrow color gamut and mediocre accuracy saps vibrancy from the display.

The disappointing color performance is paired with a strong contrast ratio of up to 1300:1, which is respectable for a budget laptop. Brightness is good, measuring up to 290 nits. That’s high enough to make the matte display usable in nearly all indoor lighting.

Don’t forget the display’s 1080p resolution. This might seem basic to enthusiasts, but budget buyers often find themselves facing laptops with an inferior 1366-by-768 display. Going with 1080p makes the Aspire 5 easy to use and ensures crisp, sharp text.

A pair of downward-firing speakers provide the laptop’s audio. They’re loud at maximum volume and tuned towards a clear, crisp mid-range. The speakers are a good match for podcasts, YouTube, and some streaming, as dialogue always stands out. The maximum volume can compete with moderate ambient noise like that from a large fan or office HVAC system.

The Acer Aspire 5 has a basic 720p webcam and a single microphone. Both perform well enough for most Zoom calls but never impress. Those hoping to look crisp in a video conference will need to budget for a decent external webcam.

The good news? The Aspire 5’s top bezel is thick, so most external webcams can perch on top of it without obstruction. The laptop also won’t tip over with a heavy webcam such as the Dell Ultrasharp 4K attached.

The Acer Aspire 5 uses its thick frame to make room for lots of old-school connectivity. There’s a total of three USB Type-A ports (two USB 3.2 and one USB 2.0), one USB 3.2 Type-C supporting up to 5Gbps of bandwidth, full-sized HDMI, Ethernet, and a 3.5mm combo audio jack.

The connectivity will be ideal for most buyers. Those looking at a budget laptop will likely use devices that require USB-A and HDMI connections.

Wireless connectivity is the usual combination of Wi-Fi 6 with Bluetooth, both provided by MediaTek’s MT7921 wireless LAN card. Wi-Fi performance was reliable across my home. I had no problems connecting a Bluetooth mouse and headphones.

So, do the specifications lead to respectable performance?

PCMark 10, a general productivity benchmark, starts the Aspire 5 off on the wrong foot with an unimpressive score of 3,902. That this ends up behind faster Intel Core processors is no surprise. However, the real problem is AMD. Ryzen 5 processors, which are found in mid-range laptops like the HP Envy x360 15.

On the other hand, it’s worth keeping the price in mind. Most Ryzen 5 laptops are priced well above $499. AMD’s Ryzen 3 is more commonly found at $499 and below. The Acer Aspire 5’s score can be excused by the fact it’s by far the least expensive Windows laptop we’ve tested in recent months.

Cinebench R15 also turns in a fairly anemic result which, as with PCMark 10, is largely due to the Core i5-1135G7’s quad-core design. It can’t keep up with AMD processors that pack more processor cores. As with the PCMark 10 results, the Aspire 5’s must be kept in mind. Laptops in the Aspire 5’s price range often have Intel Core i3 and AMD Ryzen 3 processors with as few as two cores. These will deliver even less impressive results.

We test Handbrake on Intel processors in two different ways. The first, shown above, relies entirely on raw CPU grunt to transcode a 4K file of the short film Tears of Steel. This leads to an outrageously long encoded time of over one and half hours. Fortunately, there’s a much better way to encode video on modern laptops.

This second test performs the same encode on the same file, but instead uses Intel’s Quick Sync and AMD’s Video Coding Engine to enhance performance.

The Acer Aspire 5 does well, performing the encode in just over four minutes. Its score comes in slightly behind the MSI Prestige 14 Evo, a 14-inch Windows laptop with a Core i7 processor. The AMD laptop, using VCE, slips behind both Intel machines, though its encode is still over four times quicker than before.

Intel’s Iris Xe graphics power the Acer Aspire 5 to a score of 1,226 in 3DMark’s Time Spy benchmark. This is not too far behind the HP Envy x360 15, which we reviewed with an AMD APU packing Radeon Vega 8 graphics. Gamers will find the Aspire can handle older and less demanding games like Counter-Strike and League of Legends with no issues. Demanding titles like Control won’t be playable at 1080p and 30 frames per second even at low detail.

Acer ships the Aspire 5 with a 53 watt-hour battery. This is a respectable size for a budget laptop. However, our battery test, which loops a local video file until the battery gives out, reported only six hours and 35 minutes of endurance. That’s not a great result.

Real-world results backed up our test. I used the Acer Aspire 5 extensively for several days and each day pegged endurance at six to seven hours. My workflow consisted of web browsing, writing in Microsoft Word, and photo editing. The battery life is fine for a budget Windows laptop. It can’t handle a full eight-hour work day, but it’s enough for most cross-country flights and more than adequate for use at a local coffee shop. Budget buyers looking for enhanced portability should turn their attention toward Chromebooks like the Lenovo Chromebook Flex 5 or HP Chromebook x2 11.

The Acer Aspire 5 arrives with a variety of pre-installed software. This includes Norton Antivirus, Dropbox, Firefox, and a taskbar shortcut to Amazon’s main page that simply opens the default web browser (which is still Edge, though Firefox is installed). Additional web links such as Booking.com can be found in the Windows Start menu. While a tad annoying, these extras aren’t a problem. They don’t hamper performance or generate unwanted pop-ups. Norton Antivirus is by far the most annoying software, but it’s easy to uninstall.

The Acer Aspire 5 avoids typical budget laptop pitfalls. Windows laptops sold at this price or below often make extreme cuts. They may have a dual-core processor, just 4GB of RAM, or a tiny 128GB hard drive. This laptop does none of this. It delivers the bare minimum for an enjoyable Windows 11 experience and does so at a price just tens of dollars more expensive than less capable alternatives (including other Aspire models). That makes it hard to beat for $499.