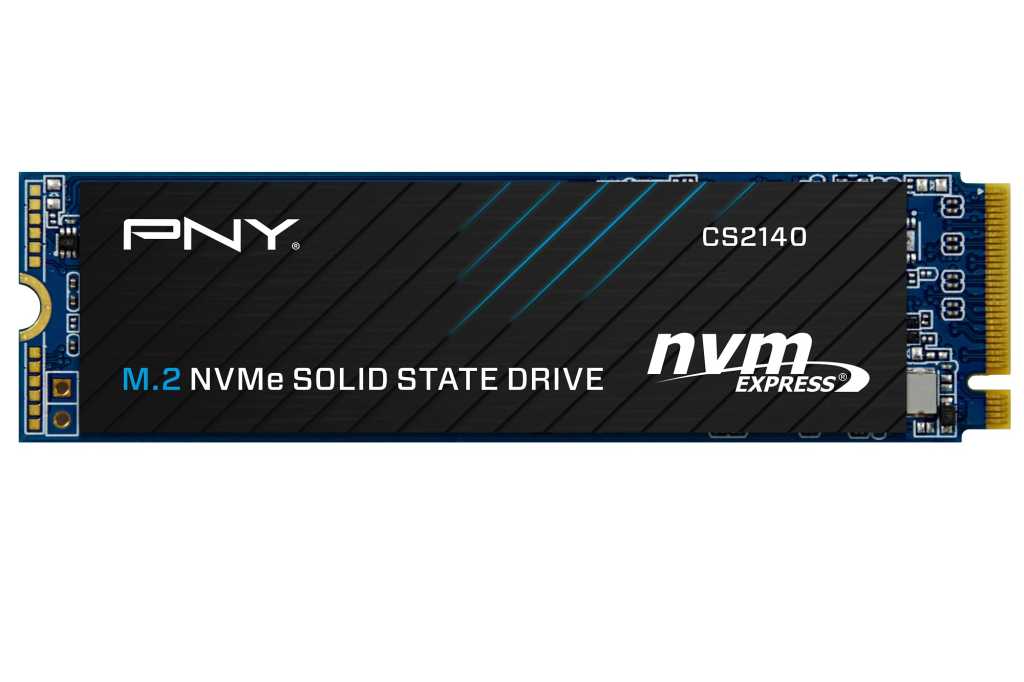 PNY
At a glance

The CS2140 NVMe SSD is a PCIe 4 drive that performs like a mid-tier PCIe 3 drive. We do wish the company would display TBW warranty info more prominently, but its bargain pricing will appeal to many. As a PCIe 3 drive, add half a star.

NVMe SSD prices have been gradually dropping, but we were still surprised to see the 1TB PNY CS2140 available for under $100. True, it was only five dollars less than that, but that’s still a great price for a good performing PCIe 3 SSD (it’s actually PCIe 4, but performs like a PCIe 3 drive–even over the faster bus). It even sports a 5-year warranty, though that’s offset somewhat by low TBW ratings. All told, this drive is an outstanding choice for anyone looking to snag a solid everyday SSD at a great price.

Considering the performance, and that there were only two chips on one side of the PCB, with room for two more, we’d guess 130+ layer TLC. There’s no DRAM cache, and PNY confirmed that the drive is HMB (Host Memory Buffer), i.e. it uses some of your PC’s memory for primary cache. The performance in our long copies indicates that there’s NAND as secondary cache being assigned dynamically.

Note that the Playstation 5, and some older PC systems do not support HBM. Slower performance may result.

PNY states clearly that the drive carries a 5-year warranty, but doesn’t make it easy to find the TBW (TeraBytes Written) rating. It’s in a warranty document that you can find online at this link (scroll down to Warranties & Policies, expand it, and open the PNY SSD Warranty Statement.)

Regardless, considering the pricing, they’re reasonable, if comparatively low—very low, in the 500GB and 1TB variations. Keep in mind that most users won’t write even that much data in five years, and that reads are free. They put no wear on the drive.

Why is the TBW rating important?

The reason we fuss is that SSD warranties are limited by two factors. One is the time period, which is five years in this case. That’s great. The other is the amount of data that’s been written to the drive, which is commonly measured in terabytes, or yes, TBW.

For instance, if a drive is warrantied for five years but rated for 150TBW, and you’ve written 175 terabytes, the warranty is void, even if it’s been only three years. PNY should put this information where it’s easier to find.

The CS2140 is a very good performer. It’s PCIe 4, but fooled us initially as the results are very “PCIe 3-like”. You don’t get close to cutting edge numbers over PCIe 4, but one of the secrets in the industry is that seek times remain largely the same regardless of PCIe generation. Lightning fast seek times produce at least half the NVMe experience.

Regardless, we compared it to other drives using DRAM-less, host buffer memory drives operating over PCIe 3 as that’s what it performs like.

The CS2140 was good, if not spectacular in our 48GB transfers shown below.

Most load/save operations are very small and never take advantage of PCIe 4’s doubled throughput. Even programs that load/save larger (1GB to 10GB) chunks of data improve minimally with the newer PCIe bus.

Where you will really notice a difference is in very long copies, such as our 450GB write (shown below) where the increased bandwidth really has time to factor in.

All in all, despite the low price, there’s no real gotcha with the CS2140’s performance. Nice.

Write performance will decrease as the drive fills up. Also, in rare cases, components may change for the worse. PNY says it might change NAND due to various factors but the drive will always maintain the performance on the package and other advertising. Our standard request with all drives is that, if, given similar hardware, they do not perform as well as our test unit, please let us know.

Unless you regularly write very large contiguous files, the PNY CS2140 is a great deal and a very good every day performer on older systems PCIe 3 systems. That the drive performs like a PCIe 3 drive over PCIe 4, and that PNY isn’t entirely forthright in displaying warranty information and component specifications, however, limits our enthusiasm.

This article was edited on 4/23/2022 to correct the reference to the CS2140 as a PCIe 3 drive. It’s PCIe 4. The middling PCIe 3-like performance during testing, even on our PCIe 4 testbed led us to assume otherwise. We apologize for the error.