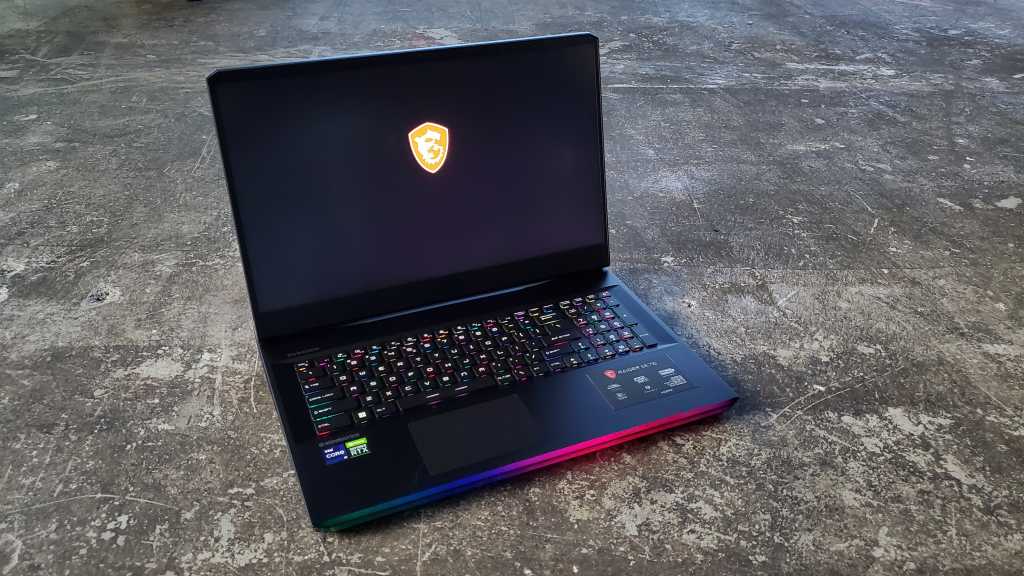 We’ve been longtime fans of MSI’s GE76 Raider. They’re solidly built machines that deliver reliable performance. That said, when it comes to the exterior, not much has changed on the latest iteration. The insides, however, sport far superior hardware: Intel’s 14-core Core i9-12900HK and Nvidia’s GeForce RTX 3080 Ti Laptop GPU. Not only were we pleased with the CPU and GPU performance, but we also really liked the 1080p webcam and the punchy audio. Read on to learn more.

Since you’re likely familiar with the GE76 Raider, we’ll skip talking up the exterior features of it here except to point out the giant RGB LED stripped across its front and go right into what matters: The inside.

The keyboard on the GE76 Raider hasn’t really changed much since the original 10th gen version. It’s not our favorite keyboard, as it’s still a tad compressed for our fat sausage fingers, but it’s serviceable. It continues to features a 10-key on the side as well with a telephone keyboard layout, which just isn’t as useful as a proper calculator layout.

The keyboard features per-key RGB backlighting with very smooth transitions, but it continues to feel dim compared to competitors such as the Asus ROG Strix G17. The good thing about the GE76’s 10-key is the enter button that’s placed near it. Oddly enough, Asus skips this bit on the ROG Strix G17.

We’re also sure the trackpad is the same as the previous iterations as well, but we found it to be a little too twitchy out of the box and could use more palm rejection.

Although some will complain about large laptops, one advantage is generally better audio, which is decent on the GE76 Raider. With its four speakers, the laptop puts out decent volume that’s enhanced by its Nahmic spatializer. The built-in microphones and noise cancellation is also fairly effective too.

The GE76 Raider was among one of the first to move from a 720p webcam to a 1080p one. The fairly wide angle of view makes it a pretty good (especially combined with its decent speakers and microphones) choice to host Zoom calls with more than one person in front of it.

When it comes to this particular model’s build quality, little has changed. The good news is it’s still a premium gaming laptop with an aluminum lid and keyboard deck. The bottom of the laptop has plastic hinge caps, but most would hard pressed to tell. The body is also fairly rigid and if your wrist is strong enough to heft a 6.4 pound laptop by the corner, you can do so without the laptop feeling like it will bend.

The GE76 Raider is built around a set of six heat pipes and most of them are dedicated to the GeForce RTX 3080 Ti Laptop GPU. MSI does include, however, a new phase-change liquid metal pad on the CPU. When temperatures are below 58 degrees Celsius, the pad is solid. When the temperature rises, the pad liquifies. MSI says the design should improve not only cooling but longevity over conventional liquid metal, which can crystalize over time.

Fan noise on the GE76 Raider is similar to previous models. It can run annoyingly loud—roughly 51dB—when it’s in high performance mode. MSI now features a Smart Auto mode with “AI” that dynamically tunes the fans and performance to eek as much performance as possible. Certainly those wanting the most performance probably won’t mind the fan noise, but we’d prefer setting the laptop to its Smart Auto mode. This mode saw the fan noise at a very reasonable 45dB range when running 3DMark Time Spy.

You might think the leap from 45dB to 51dB (a massive difference) would result in a huge performance difference, but it’s not that bad. In fact, in 3DMark Time Spy, it works out to about 6 to 7 percent performance reduction in exchange for a very large reduction in noise.

Laptop upgrades on the GE76 are typical for a large gaming laptop. There are two DDR5 SO-DIMM slots and two M.2 slots for storage. The wireless card is a Killer/Intel Wi-Fi 6e, which can be replaced. Access is also fairly easy without having to remove the motherboard.

Big gaming laptops are usually bought for their speed, so we’ll start with Maxon’s Cinebench R20, which is a benchmark based on the engine used in its professional Cinema4D application. More cores means better performance and the 14-cores of the 12th gen Core i9 doesn’t disappoint. That shouldn’t surprise anyone as 14 is more than 8. The MSI GF76 Katana listed here is a 14-core CPU too, but at its stock settings, it doesn’t push the CPU very hard. On its performance setting, it actually moves into the 2nd best position here. You should take the score for the GE76 Raider as a good indicator that it’ll generally perform multi-threaded or multi-core tasks such as 3D rendering, CPU-based encoding, and even heavy-duty Excel analysis quite well.

The vast majority of applications people use, however, don’t really stretch all the CPU cores in a system. That’s why we run Cinebench R20 using a single-core or thread. That should give you a better indicator of how the GE76 Raider performs tasks like browsing, photo editing and general Office use. This laptop is clearly the fastest machine laptop here, which should translate into a snappier feel over the others in most functions.

Cinebench R20 is a fairly short running test that doesn’t really stress the cooling system of a laptop, which is a critical feature of any performance machine. To push the laptops harder, we task them with transcoding a 30GB 1080P file using Handbrake 0.9.9 and the default Android Tablet preset. A shorter bar indicates a given laptop is faster. The winner again is the GE76 Raider, which finished our conversion in roughly 13 minutes. That’s a beefy improvement over say, the Asus ROG Zephyrus S17 with its 8-core Core i9-11900H, which takes almost another five minutes to wrap up the job.

Our final non-GPU focused test uses UL’s PCMark 10 application performance, which measures a laptop’s performance while running various tasks in open-source Office, Photo Editing, and 3D rendering applications. This is a test that generally helps us realize that as exciting as it is to see some amazing multi-core score, in reality it probably doesn’t matter that much. You can kind of see that in the results for most of the laptops here, which, we should admit, likely would be indistinguishable from the others. After all, can you really tell the difference between laptop A and laptop B when all you’re doing is typing a letter? We’d still argue that no you can’t, but the data also tells us that the GE76 Raider is going to be just a little bit snappier than the others.

Let’s be honest: You don’t buy a laptop with this much RGB to do Zoom calls. You’re here for the gaming performance, so to look at that, we’ll start with UL’s 3DMark Time Spy. It’s a popular and reliable synthetic graphics benchmark that’s mostly GPU-focused. The overall score does factor in the CPU of the laptop, but what does the GE76 Raider and its GeForce RTX 3080 Ti get you over the others? Almost a 25 percent better score.

Time Spy is more about conventional DirectX12 gaming performance, so we ran 3DMark’s Port Royal test to gauge ray tracing performance. The GeForce RTX 3080 Ti GPU, if you don’t know, features about 20 percent more ray tracing cores and CUDA cores than the plain GeForce RTX 3080 GPU. With the higher power and heat limits of the MSI GE76 Raider adding to the equation, we’re seeing a 23 percent advantage over the next fastest laptop in our list.

Real games matter too, so our next test is the now the elderly Rise of the Tomb Raider, which we run at 1080p resolution in DX11 mode. This older game likely leans on the CPU a little harder than a newer game, but it’s still largely driven by the GPU. No surprise, the GE76 Raider and its GeForce RTX 3080 Ti Laptop GPU easily outpaces the other laptops including a stack of GeForce RTX 3080 GPU laptops.

Moving on to a game that’s tougher on the GPU. To work the laptop a little harder, we run Metro Exodus on its Extreme preset at 1080p. The GE76 Raider has a clear advantage against all other gaming laptops here, but it appears to run dead even with the Asus ROG Zephyrus S17, which features an 11th gen Core i9 and RTX 3080.

Our last test focuses on battery life, which can be important to some folks. However, anyone who expects to run a laptop with a power-sucking 4K screen configured with a high-power CPU and GPU is sure to be “using it wrong.” All laptops today are limited to a maximum battery size of 100 watt hours due to aviation regulations that prevent giant lithium ion batteries on planes.

With a fixed “gas tank,” the high performance parts aren’t going to give you very satisfying battery life while doing something as intense as, say, gaming. We’ve been saying roughly an hour or two based on the game and laptop for years and that hasn’t changed.

The key point is that driving the CPU or GPU hard always means lackluster battery life (yes, you too M1 Max fans). But doing lightweight tasks such as watching a video might yield better battery life than you’d expect.

For that test, we loop a 4K video file with the screen set to a relatively bright 250 to 260 nits with the laptop in airplane mode and ear buds plugged in. The idea is to simulate watching a movie on a plane or an office with the cabin lights on.

We saw just about 6.5 hours of video run time on the GE76 Raider, which is very competitive with laptops with lower-resolution screens (albeit smaller batteries, too). Basically, you should expect fair battery life doing lighter tasks and far worse battery life under heavy loads.

This iteration of the GE76 Raider is the fastest one yet! That’s just lazy reviewer speak hunting to be quoted in company ad-copy. The honest truth is this: This laptop is the best we’ve seen with significant increases over previous iterations.

And we’re not talking five years, either. The first time we saw the GE76 Raider was early 2020 when it was outfitted with a 10th gen Intel 8-core Core i7-10870H. Two years later, the latest model features a hefty 85 percent higher score in multi-core performance.

It doesn’t main that edge in single-core performance, but a 58 percent improvement in performance is nothing to scoff at. If there’s one knock we have on the GE76 Raider, it’s the GeForce RTX 3080 Ti, as it doesn’t quite impress as much. On paper, the GeForce RTX 3080 Ti adds 20 percent more to, well, everything from shader cores to ray tracing cores, but it washes out from 4 to 12 percent in the end. That’s good but not the punch some might have expected.

In the end, while we think the GE76 Raider is due for a makeover, we can’t complain about a laptop that’s now offering a substantial performance boost over the version sold just two years ago.