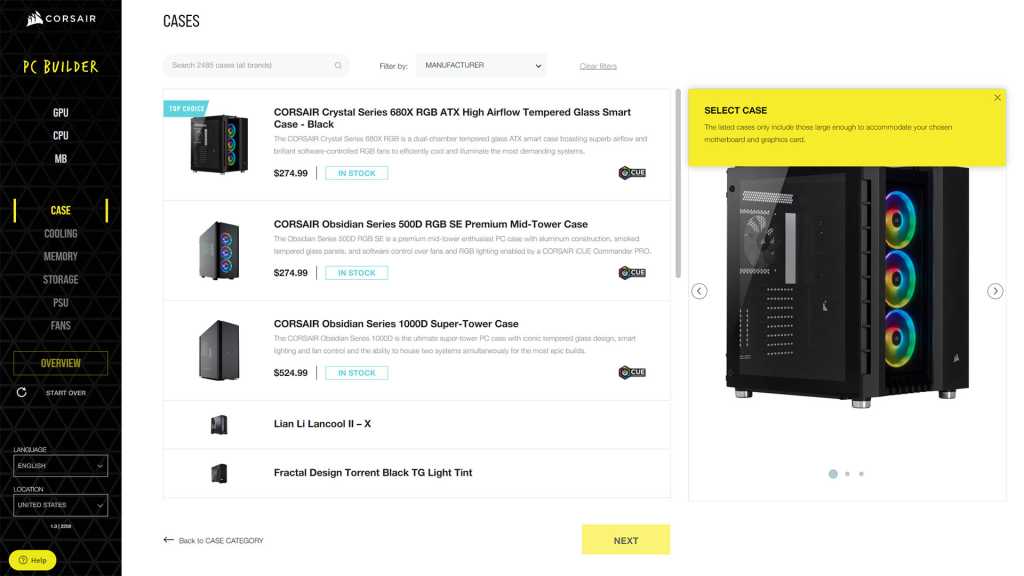 “Building a gaming PC really isn’t that hard” is an easy thing to say…after you’ve built a few. But selecting all those expensive components remains a daunting task for newcomers, not least because there’s a danger of buying parts that aren’t compatible with each other. Like NZXT and Newegg before it, Corsair is here to take the guesswork out of assembling your first PC.

The Corsair PC Builder is essentially a branded and more visually pleasing version of PCPartPicker, naturally featuring Corsair products from start to finish (aside from a few that Corsair doesn’t sell). That said, this isn’t a complete ripoff: Corsair starts with the GPU, the most critical component for a gaming build, and gradually constricts choices around compatibility for your chosen component. (It’s also handy if you already have a new GPU and you’re looking to upgrade the rest of your machine.)

Here’s a surprise: the tool actually includes at least a few parts from Corsair’s competition. While the GPU, CPU, and motherboard choices obviously feature non-Corsair hardware (because the company doesn’t sell any), you can also choose cases from Lian-Li, BitFenix, BeQuiet, Fractal Design, Cooler Master, and more. But that magnanimous approach appears to be for cases only, perhaps as a means to easily check upgrade compatibility with customers’ existing machines. The sections for AIO coolers, fans, RAM, SSDs, and power supplies are restricted to Corsair products alone.

When you reach the end of the configurator, you can buy all the Corsair products directly from the online store, though you’ll be on your own for parts from other suppliers. Personally I’d recommend sticking with PCPartPicker if you want maximum flexibility, both in part and store selection. But if you’re a fan of Corsair’s products and you were planning to buy direct anyway, the PC Builder might save you some time double-checking for compatibility.