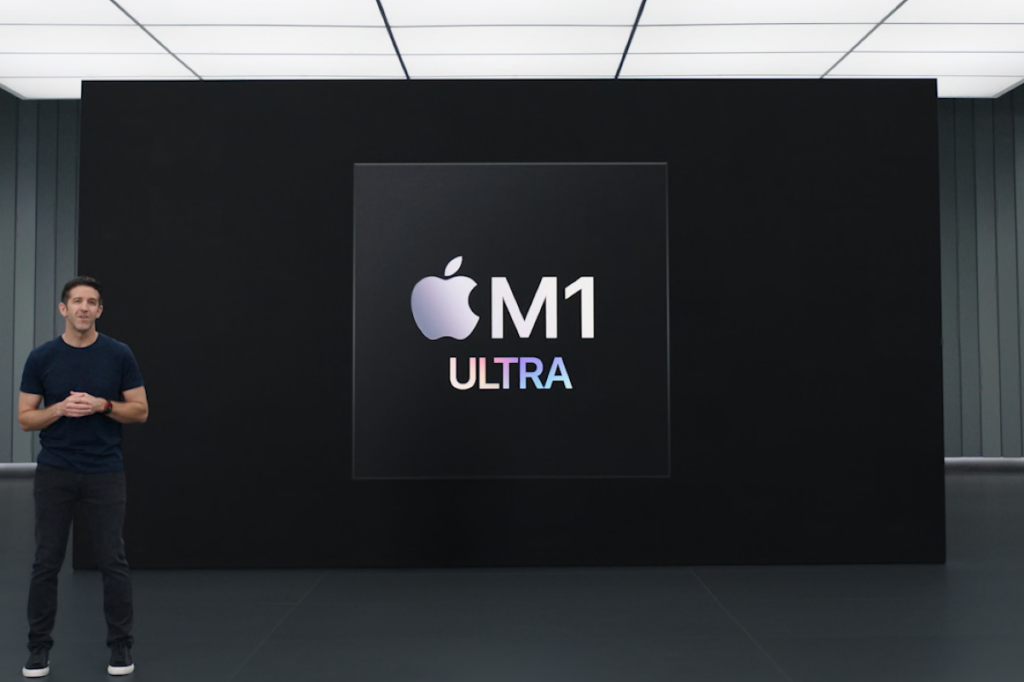 Apple added “a monster of a chip” to its Apple M1 family on Tuesday: the M1 Ultra, which reflects some familiar approaches to chip design and presents a high-end contender for the PC market to compete against.

Essentially, the M1 Ultra combines two of Apple’s existing M1 Max chip dies together within a single package. They are connected by a silicon interposer that Apple calls UltraFusion. The result? A fully 20-core Arm CPU, with 16 performance cores and 4 efficiency cores. The M1 Ultra chip will debut within the Apple Mac Studio, a $3,999 workstation Apple announced on Tuesday as well.

Johnny Srouji, Apple senior vice president of hardware technologies, noted that there were “physical limitations” in designing future iterations of the M1 silicon. By combining the two M1 Max dies within a single package, Apple created a system-on-a-chip with “blazing performance,” Srouji said.

So what does the M1 Ultra offer?

As Srouji noted, the M1 Ultra has total 20 cores in all, doubling the Max CPU core count (and potentially performance) on paper alone. Apple didn’t say what process technology the M1 Ultra uses, though it’s used a 5nm process technology with all of its previous chips. That’s potentially an enormous chip, as the M1 Max was already 57 billion transistors, and this would essentially double that. Apple shows this off, below:

The two CPUs are connected via the new UltraFusion architecture, which supplies 2.5TB/s of total bandwidth between the two chips, which Srouji claimed was “four times the bandwidth of the leading multi-chip interconnect technology.” Memory bandwidth is also increased, to 800GB/s, with a total supported unified memory of 128GB.

Of course, connecting various silicon dies together isn’t especially novel; in fact, AMD announced its Ryzen Threadripper Pro 5000 chip on the same day. AMD built the Threadripper with the express purpose of enabling high processor core counts, and the design combines various multicore silicon dies. For example, the new 24-core Threadripper Pro 3945WX includes three 8-core CCDs (Core Chiplet Dies), which tie the individual cores together. (It’s worth noting that earlier Threadrippers used CCDs with what was called a CCX, or Core Complex, which connected the CPU dies together with AMD’s Infinity Fabric—at the basic level, that’s the same approach that Apple is taking here.)

In terms of CPU performance, Srouji said that the M1 Ultra delivers 90 percent higher performance in the same power envelope than the “fastest 16-core PC desktop chip available” (the Intel Core i9-12900K) without stating which benchmark Apple selected to make the claim. Put another way, Apple said that its M1 Ultra chip could deliver the same basic performance while using 100 watts less power than the 12900K, too.

We can assume that Apple’s GPU performance has been doubled as well. Apple said that the M1 Ultra now features a 64-core GPU, double the core count of the M1 Max. It too delivers faster performance than the highest-end GPU available (the Nvidia GeForce RTX 3090) while using 200 watts less power, Srouji claimed, again without specifying the benchmark used.

What’s interesting, though, is that the UltraFusion interposer apparently connects the two GPUs together, too — that’s not something many people expected.

Finally, the M1 Ultra has 32 neural engine cores that can learn up to 22 trillion operations per second to accelerate machine learning, Apple said. The media engine is twice as fast, as well.

How will the Apple M1 Ultra compare to the PC?

Looking back at our Apple M1 Max performance evaluation, we can see how the 10-core Apple M1 Max trailed the 14-core Intel 12th-gen Core i9 laptop by a bit — but only a bit. Can we assume that the M1 Ultra performance will double as well? Maybe not literally, but it will surely be close. No matter how you slice it, that would be a big lead for the Apple M1 Ultra.

Again, in the popular Geekbench benchmark, doubling the M1 Max performance shown here would certainly propel the M1 Ultra to the top of the heap, easily.

Apple does have some cause for concern, however. When you start factoring in GPU performance, our earlier tests show that the current M1 GPU performance already suffers, and it suffers too much to probably catch up to the PC ecosystem. The Geekbench Compute performance test uses the GPU to run 11 compute loads such as depth of field, face detection, and particle physics. The test uses two cross-platform APIs—the agreed upon instructions and protocols to perform functions on different hardware—in OpenCL, Vulkan, and Nvidia’s proprietary CUDA and Apple’s proprietary Metal API. The test basically reveals that Apple’s integrated GPU will lose to a discrete GPU any day.

In all, there’s no denying that the Apple M1 Ultra is an absolute monster of a chip, as Apple itself claimed. Now we’ll see how the PC industry responds.