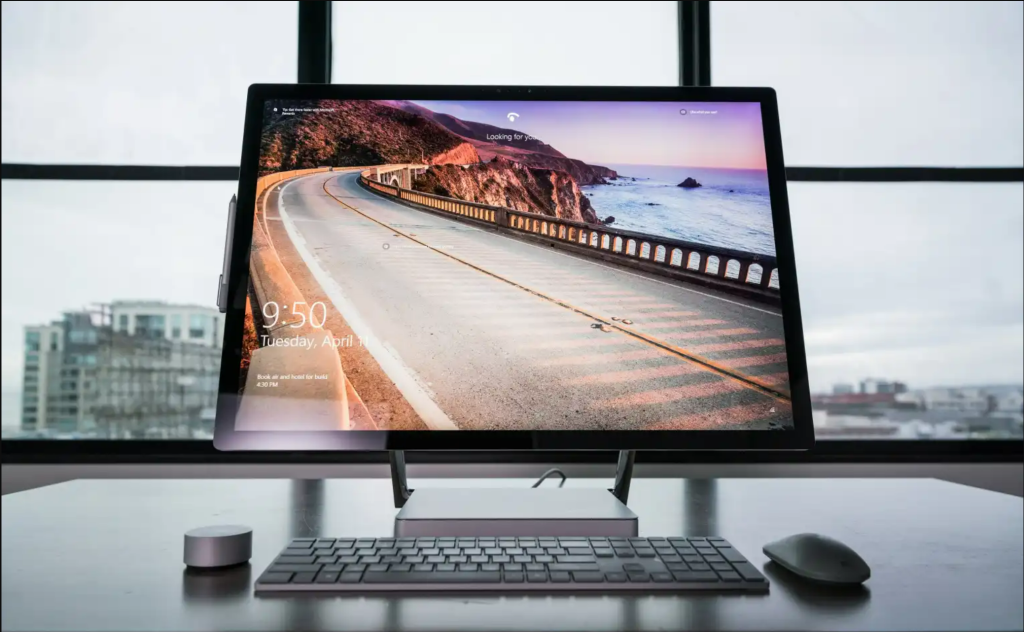 Apple’s new Mac Studio not only includes what could be the most powerful processor in the PC landscape, but also exposes (and solves!) many of the weaknesses of its direct rival, Microsoft’s Surface Studio. If Microsoft takes these lessons to heart, however, imagine what a Surface Studio 3 could look like!

Microsoft’s gorgeous all-in-one hasn’t been refreshed in years, but its iconic swiveling 28-inch PixelSense touch display captured both hearts and minds when the $4,100 Surface Studio first debuted in 2017. Now, Apple’s Mac Studio, a $3,999 small-form-factor Mac, has stepped in to fill the void, with the $1,599 Apple Studio Display sitting alongside.

Microsoft’s hardware division has held its head high throughout the last decade or so, shipping everything from tablets to laptops to unique combinations of the two. Apple, meanwhile, has garnered a reputation for quietly watching trends take hold, adopting them, and trumpeting the outcome as something new. That criticism doesn’t really hold true here. In fact, Apple has set some new standards that Microsoft might learn from.

Instead, that role falls to the Surface Laptop Studio, which trades some of the resolution offered by other Surface devices for a high refresh-rate screen. Some issues with the high-refresh-rate capabilities and performance held the Surface Laptop Studio back from an Editor’s Choice award, but it’s clearly the best Surface Microsoft makes at the moment. And it’s available, of course — as is the Mac Studio.

The way in which the Surface Studio 2’s massive 28-inch 4500×3000 display raises and lowers, transforming from an IMAX-like monitor to an artist’s easel, is an iconic experience that’s intrinsically tied to the Surface Studio line. But it doesn’t have to be. The way in which the Studio was constructed — with the components built into the base, rather than behind the screen — doesn’t preclude the hinged display from being sold separately, replacing the Studio’s CPU and motherboard with a solid support instead.

Apple’s approach of designing a standalone hardware chassis and selling a separate display is Apple’s pay-through-the-nose business model, once again. But the Mac Studio allows customers to buy up to four of its $1,599, 5K Apple Studio Displays — which, of course, you can buy separately. This is exactly what Studio (or just technology fans) have been asking for for years, and there’s no reason Microsoft couldn’t do the same, if it chose to. Why not empower customers to pair their best computer with Microsoft’s best display, or the best available monitors in the wide-open PC ecosystem?

Remember, the Mac Studio has both HDMI and Thunderbolt out. There’s absolutely nothing “Apple-y,” such as a proprietary connector, that requires the Mac Studio to pair with an Apple Studio Display. Would a Mac creator pair a Mac Studio with a touchscreen Surface display that could be swiveled down and inked upon? I bet they would.

Clearly, the most jaw-dropping aspect of Apple’s launch was Apple’s announcement of both its “monster” chip, the Apple M1 Ultra processor, and the fact that it would be built into what is essentially a small-form factor PC. That’s an enormous bar to clear for a PC industry that’s predicated upon the powerful but power-hungry X86 CPU architecture.

But the integrated Surface Studio 2 launched with mobile components inside of it — and it really didn’t need to. If Microsoft’s going to continue with the integrated all-in-one approach, replace the laptop hardware with more powerful parts, including a GPU that can challenge what Apple offers. Make the base a little bigger.

Today, the Surface Studio 2’s base has about half the volume of the Mac Studio — 219 cubic inches to 111 cubic inches. But does absolutely anyone care how thick an all-in-one PC’s base is? I’m going to argue the answer is no — you’re looking at the screen, not the hardware it’s mounted upon. If anyone at Microsoft objects, buy them a ticket to Cupertino. It can’t be that hard.

I made this point in a Twitter exchange this week: I don’t mind how many ports a laptop includes, I mind how useful they are. The Mac Studio with an M1 Ultra inside includes four Thunderbolt 4 ports on the rear and two more on the front. (There’s also two USB-A ports, and even a headphone jack!) That’s a massive amount of bandwidth, suitable for the aforementioned multiple Mac Studio displays as well as other external devices.

The Surface Studio 2 included four USB 3.0 Type A ports, and put them all on the rear of the Studio. That was simply a dumb decision, even if the Studio debuted before the ubiquity of USB-C and the growing influence of Thunderbolt technology. If and when a Surface Studio 3 debuts, I’d like to see Microsoft approach the ports issue in much the same way Apple does.

It’s possible that Microsoft will actually ship a Surface Studio 3 later this year. And yes, if that’s true, it might be difficult to steer the ship in a new direction so late in the game. But so many of these design directions have been asked for, for years. It’s just unfortunate that Apple has been the company that answered the call.