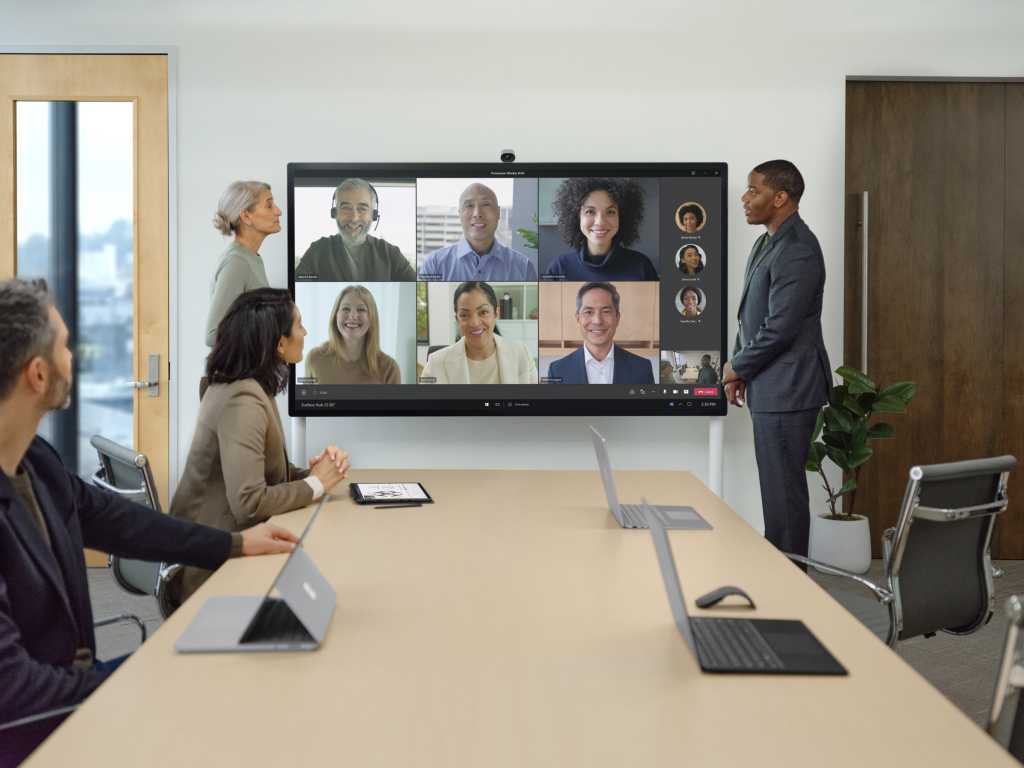 PowerPoint presentations may change in the next few months, as Microsoft integrates live and pre-recorded video into presentations you view and create.

Microsoft’s engineering teams are always hard at work launching features, and today marks Microsoft’s spring 2022 update of sorts, on a variety of different subjects. Microsoft announced a new Surface Hub-specific webcam, updated features to Teams and other productivity apps, and some specific improvements to how Microsoft deals with workers who are returning to the office. For that matter, Microsoft also released a survey noting that many workers aren’t all that interested in returning to work, either preferring to work remotely or as a hybrid of at-home and in-person work.

PowerPoint touches many different lives and careers (even holiday parties) so it’s not surprising that two of the most important announcements involve it. Specifically, Microsoft is merging PowerPoint Cameo with its Recording Studio function, so you’ll have more ways to deliver video as part of presentations. PowerPoint Cameo takes an idea that has appeared in mmhmm and other solutions: It captures a small live feed of you talking through your slides, and integrates that with the presentation. All Recording Studio does is simply add the capability to pre-record that video, so you’ll have the option of presenting live or pre-recording the video so others can review it on their own time –as we’ve seen already happen with the ability to record Teams calls, for example.

All actions have consequences though, and Microsoft’s latest Future of Work survey highlights a problem: Working at home (or just working) has led to a whopping 252 percent increase in time spent in Teams meetings since February 2020. Microsoft used its anonymized telemetry within Microsoft 365 to identify another alarming trend: The average workday increased 46 minutes during that time, and time spent working after hours increased 28 percent. On weekends, employees are now working 14 percent more hours than they used to.

In the survey of 31,000 people, Microsoft found that 51 percent of hybrid workers (splitting work between the home and office) plan to go fully remote, and 57 percent of remote workers want to go back to the office part-time as hybrid workers.

The inevitable question: If Microsoft is now allowing workers to produce video PowerPoint presentations that allow for more asynchronous work after hours, isn’t Microsoft simply contributing to the problem of burnt-out workers? Microsoft doesn’t think so.

“Our customers are telling us they want to empower people for a world of work that is dynamic and fluid, and the data shows that the shift to asynchronous work is part of the new normal,” a Microsoft representative said in a statement. “Monthly use of meeting recordings has doubled since March 2020, allowing people to catch up on meetings at a time that works best for them. As we emerge into this new hybrid reality, we are focused on building experiences that enable everyone to connect and engage from anywhere and at any time. We also recognize that not only are employees on different time zones, but choose to work their own, unique hours, if their jobs give them the flexibility. With that being said, some employees may choose to listen to a meeting instead of attending live, because of their individual scenarios and we want to empower them and give them the flexibility to do so.”

Recording Studio and Cameo do not provide a transcript for employees to review, Microsoft said, but videos can be uploaded to OneDrive for Business, which provides translation.

Microsoft also provided some timeline updates: Last September, Microsoft’s migration of PowerPoint’s Presentation Coach to Teams (Speaker Coach) will be completed by the second quarter of 2022. Microsoft is also improving Whiteboard within Teams, with new templates, reactions, and collaborative features, also in the second quarter of 2022. Finally, Microsoft is also adding language interpretation, which allows the presenter to assign human interpreters to various attendees, with the interpreted audio playing at a higher volume.

Microsoft is also announcing new capabilities to focus on hybrid work, one of the themes Microsoft chief executive Satya Nadella frequently promotes. Hybrid work — the flexibility in roaming between the office and remote work — is as much a cultural problem as it is a productivity topic.

Microsoft already offers a program called Microsoft Teams Phone, where users can place voice calls from within the app to landlines, VOIP phones, and more. Microsoft is expanding this with a program called Operator Connect Mobile, which does the opposite: It provides users with a single “business line” or phone number for their desk phone and mobile phone, allowing someone to call that number and reach you whether you’re in the office or on a mobile device. It will even roam between Wi-Fi and cellular as you move between the two, Microsoft says.

Companies like Vonage have already offered a single one-number-for-all capability for years, but Microsoft is now getting on board, too. (To be fair, app-to-app communication like Skype or Messenger already finds you on whatever device you are on.) Technically, Operator Connect Mobile will be a program for employees, not consumers — but the subtext is that the line between your work and personal life is also blurring.

To make the attendees in meetings feel more included, Microsoft is requiring people who use Teams Rooms companion devices to turn off their audio — and, soon, will require them to turn their laptop camera on even if they’re in the room. The idea, according to Microsoft, is to take remote users, who have their cameras on, and make them equivalent to the people in the room — one attendee, one face. That avoids implying that there’s a collection of “in” attendees and a collection of “everyone else. Likewise, Microsoft is taking its Surface Hub 2 and placing the screens from the remote attendees at eye level, called Front Row. It’s another way to make everyone feel equal.

Microsoft took a similar approach with the launch of its 12-Mpixel Surface Hub 2 Smart Camera, a webcam that will only work with the Surface Hub 2. We’ve seen more webcams like the Dell UltraSharp 4K webcam automatically pan and zoom to center on its user’s face, and Microsoft took a similar approach. Using algorithms that look for attendees, the webcam will narrow and sharpen its view to frame all the attendees in the room.