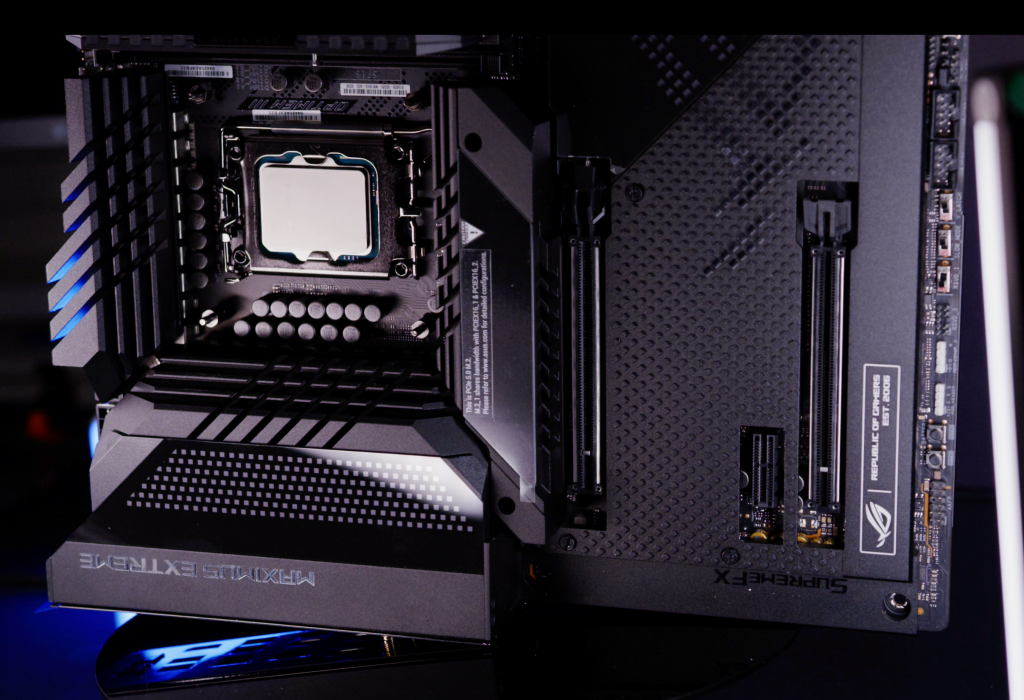 Thiago Trevisan / IDG
At a glance

The Asus ROG Maximum Z690 Extreme is truly a motherboard for the PC enthusiast who demands the best of the best, price be damned.

Intel has finally rejoined the competitive landscape against AMD with its Z690 platform, matching high-end muscle with the ferocious Core i9-12900K CPU. With great power comes not-so-great pricing, however. The Asus ROG Maximus Z690 Extreme’s $1,099 price tag eclipses the $649 price of past juggernaut motherboards like the X299 Asus Rampage VI Extreme, recasting what a high-end motherboard should cost.

We’ll discuss the specs, features, and performance you should expect from a motherboard of this caliber, and whether it delivers enough to justify your purchase.

The Asus ROG Maximus Z690 Extreme is packed with various features and an impressive spec list, including DDR5 memory support and Thunderbolt 4. Keep in mind that it’s an extended size, or E-ATX, meaning it’s larger than a typical ATX motherboard and may not fit in all cases. You’ll get an integrated I/O shield, too—no worries about forgetting this step of the build process!

You’ll find Wi-Fi 6E along with 10GB ethernet. Thunderbolt 4 accompanies the many USB Gen 2 ports on the back. You’ll have five slots for M.2, and two of them are on the included ROG Dimn2 card that attaches next to the RAM.

Here are some important specs to be aware of:

Extreme. That word describes why many would like this motherboard, right? Minimalist, RGB-agnostic afficionados need not apply; this motherboard packs some serious “Times-Square-Level” lights. With a 2-inch OLED and animated Matrix display, it can be configured to show anything from CPU stats to animations. When you’re paying for extra features, that includes eye candy.

Also, it’s heavy. Like, really heavy, but in a good way. Weighing in at over six pounds, it’s mighty to hold. The build quality is impressive, with an armor back plate and plenty of cover for the front areas. The VRM heatsinks are huge too, and of course you’ll get plenty of M.2 cooling with the covered plates a well.

It’s a very attractive motherboard overall, with great control over the RGB lighting via Asus Aura software, so it can be customized however you’d like.

One important thing to keep in mind is that the top M.2 cover does stay slightly raised, so if you’re doing a water-cooled graphics card with a thick backplate, such as those with active cooling, be mindful of clearance issues. Likewise, if you’re doing a GPU on the bottom PCI-E slot, a thick GPU cooler can interfere with some of the cables, preventing a solid connection. (This happened to me with an Asus Strix GPU cooler and the RGB and USB ports on the bottom of the motherboard.)

Many motherboards have unique features, but what sets apart a board at this level, and price, is the sheer number and combination of features. Let’s break down some of the most enticing:

With a powerful CPU such as the Intel Core i9-12900K, you’ll want to make sure you’re maximizing its potential with a board like this.

The Asus BIOS continues to be one of the most pleasant and intuitive to use, and if you’re doing any overclocking, you’ll certainly spend a lot of time here. You can tweak many CPU settings, and your RAM has massive potential as well.

Let’s get the DDR5 issue out of the way—you’ll want to stick to two RAM modules if you want to use the XMP profile and get the maximum rated speed. It may be a good idea to get higher capacity if you need it, as going to four RAM sticks will limit your DDR5 speeds to the base 4800Mhz. This is…not extreme, but it’s how it is at present. Memory is always Dual Channel, of course.

VRM temperatures with the power stage components are more than adequate for even a powerful, hot-running 12900K.

It seems like much of modern overclocking is more CPU limited, as they come running pretty hot from the factory as is—so any minor improvements with manual tinkering will have diminishing returns.

Asus has an excellent suite of AI overclocking and optimization tools, as well. You can find these both in the BIOS, as well as the Armoury Crate Software.

Clear CMOS and BIOS flashback is also available, making overclocking attempts easier to recover from. You’ll even get LN2 Mode switch for users wanting to push it further with liquid nitrogen; plus a retry button, thermal headers, etc. (Don’t feel left out; we’re not doing any liquid-nitrogen cooling either!)

Are there cheaper alternatives on the market for Z690, such as the Asus ROG Strix or Gigabyte Aorus Master? Sure, and they even pack many of the same features as the ROG Maximus Z690 Extreme. The magic is in the details if you can stomach the price, however. Here, you’ll get all of the features packed together—not to mention a truly impressive and premium design. You may also want to check out the Asus ROG Apex or Formula motherboards, which have most of the features, but less of a price premium. (Check out Alaina Yee’s tips on what to look for in a motherboard for your 12th-gen CPU.)

It’s not even the most expensive option on the market, either. If you want a water-cooled solution, you can find the liquid cooling-focused Glacial version of this motherboard for much more—and MSI’s luxurious Godlike recently made an appearance for Z690 as well.

This motherboard is for the person who wants an extremely high-end build and to tick all of the performance and aesthetic options. With PC components all skyrocketing in price the last few years, it was only a matter of time before motherboards got more and more expensive, too.

It will suit both content creators, with its massive connectivity suite, as well as enthusiast PC builders and gamers, with a plethora of performance and aesthetic niceties.

Small quirks and the high price tag keep it from being a 5-star product and highly recommended motherboard, especially when considering that some other motherboards with similar (but not all) features come in at hundreds of dollars less. If you love the design and must have all of its many features, however, it’s an amazing product for the discerning high-end enthusiast who doesn’t mind shelling out the cash.

Editor’s note: This article was published on March 22, but was updated to add the video review.