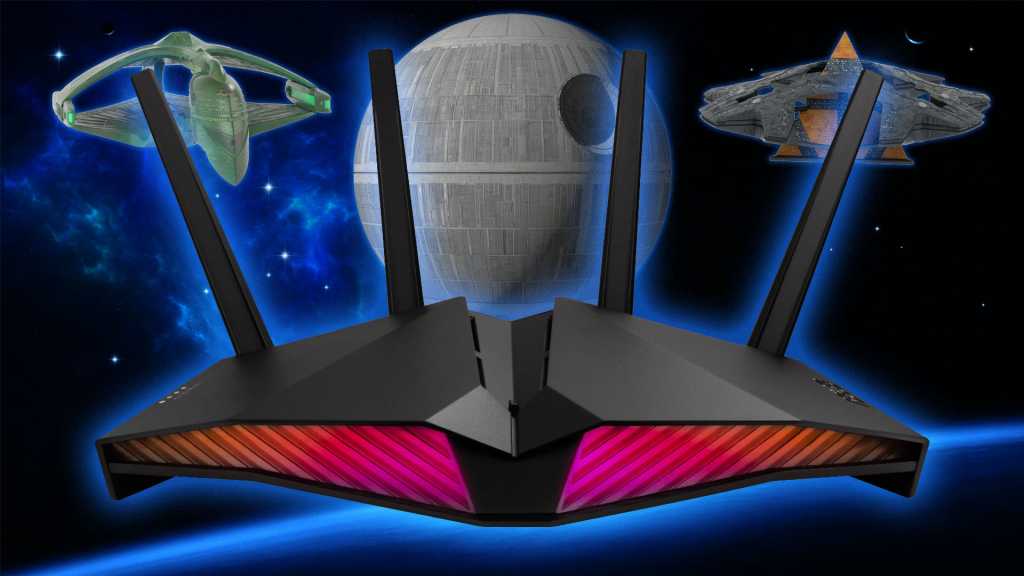 Coverage. Speed. Latency. Security. All of these are important features of a Wi-Fi router, and they’re all things we’ve completely disregarded for this article. Because the question of the day is, which modern router looks the least like a consumer electronics appliance, and the most like something that would menace the Rebel Alliance in the third act?

Gaming hardware in general has some weird aesthetics going on. Between the seas of black plastic and galaxies of RGB lights, an expensive gaming desktop setup looks like a rave in a NASA control center. But Wi-Fi routers in particular, with their multiple antennas and no real restrictions on size or shape, have proven an irresistible target for the more excessive kind of product designer.

So we present a ranking of the most spaceship-like Wi-Fi router designs. We’ve limited our selections to just one design from each major manufacturer (or else we’d be here all day), with absolutely no concern for their technical capabilities or overall quality. Nope, this is just a list of which routers look the most like an evil spaceship, from least evil spaceship-adjacent to most.

The tail end of this list is full of routers that aren’t specifically marketed for gaming prowess, but as products from some of the biggest tech companies on the planet, we’d be reticent to skip them. Least spaceship-like of all is the latest mesh router from Amazon, the Eero Pro 6. Mesh routers are designed to be neutral in terms of decor, so perhaps it’s not surprising that this one is just a curvy lump of plastic. The eye would slide right over it, on a bookshelf, end table, or even in the inky depths of space.

This isn’t the latest model of mesh router offered by Google — that’s the Nest WiFi. But its older cousin looks ever so slightly more like a spaceship, if only because its symmetrical, perpendicular lines are harsher than the Nest’s curvy air freshener look. You might be able to imagine a fleet of Google WiFis as off-brand Death Stars, but not very intimidating ones.

This combination cable modem-Wi-Fi router is, like most of Arris products, essentially a box. But its slight taper and cheese grater housing at least show a bit more thought than the usual Surfboard model, which looks like a tiny plastic radiator. This modem-router might be mistaken for a spaceship from a Kubrickian alien species that’s gone beyond the need for design elements.

Motorola is another manufacturer that prefers modems to routers, but this fairly basic modem design is at least going in the right direction. Its smooth curves and four very simple antennae put it more in the mothership category than something truly scary. While you could stretch your imagination to make it a spaceship, it would only be a truly intimidating one if it was made giant by context, looming over a moon or national landmark.

Now we’re getting somewhere. The unnecessary angles, all-black housing, and front-facing blue LEDs of the WRT32X definitely make it seem like it could stand-in for a spaceship in a low-budget SyFy original. The exaggerated “feet” make this look more like some kind of landing craft or troop transport, more menacing for its contents than its actual shape, but I’ve seen worse.

This gaming router is full to bursting with unnecessary aesthetic choices, most notably the vibrant red paint on each of its eight oversized antennae. But its lack of lighting and bilateral symmetry keep it from being a truly intimidating design. It might work as an evil fortress or space station, but it just doesn’t quite look like something you’d need to jump to warp to escape at the last second.

Tenda is a budget brand of mostly utilitarian equipment, but it’s coming in strong with this dark horse spaceship-router design. The angular housing has two front protuberances that look like they could be claws or mandibles, and the front-and-center blue LEDs look like nothing so much as a cockpit. Even the company’s own marketing compares it to a stealth fighter. The back end is rather dull, but overall it’s an excellent entry in this ludicrously specific competition.

This router design might be lacking in superfluous paint or lighting, but that main housing is just gorgeous. The two polygonal sections at the end suggest back-mounted engines, and the subtle angularity of the antenna back it up by encouraging the user to tilt them away from the tapered front. This would look like a practical but still-frightening vehicle… if it was a fictional spacecraft instead of a piece of networking equipment.

This isn’t the most advanced or feature-filled router in the Asus lineup. In fact it doesn’t even get the “Republic of Gamers” badge. But look at that thing! The front slats are clearly imitating the air intake of a sports car, and they’re lit with RGB lighting to give them customizable menace. The center and outer feet combine to look like down-tapered wings. If you told me that this was a new design for a Cylon raider or Goa’uld death glider, I’d find it very difficult to argue with you. Asus clearly agrees, because it gave this router a paint job and made it an official Gundam-branded collectible. But there’s just one element that’s dragging it down: the antennae. They’re simply stuck onto the back of the housing, detracting from rather than adding to an otherwise faultless spaceship look.

It was a close run between the Asus model and this one. But in the end, there’s no denying that the Nighthawk RAX200 (jeez, even the name sounds like a spaceship!) is a starfighter that just happens to broadcast Wi-Fi. The single swooping line incorporates the main housing and antenna arrays in a look that immediately evokes an advanced TIE fighter. Layers of black “armor” with contrasting finishes look like they’re designed for atmospheric strafing runs. The gentle slope to the rear indicates engines (instead of, you know, a bunch of Ethernet and USB ports). Even the open front indicates some kind of intake or deflector dish. It’s easily the least practical design on this list, its rigid angles demanding about three times as much volume as it actually occupies. But even sitting on a kitchen counter or jammed behind an entertainment system, the Nighthawk RAX200 just screams “deactivate your shields prepare to be boarded.”