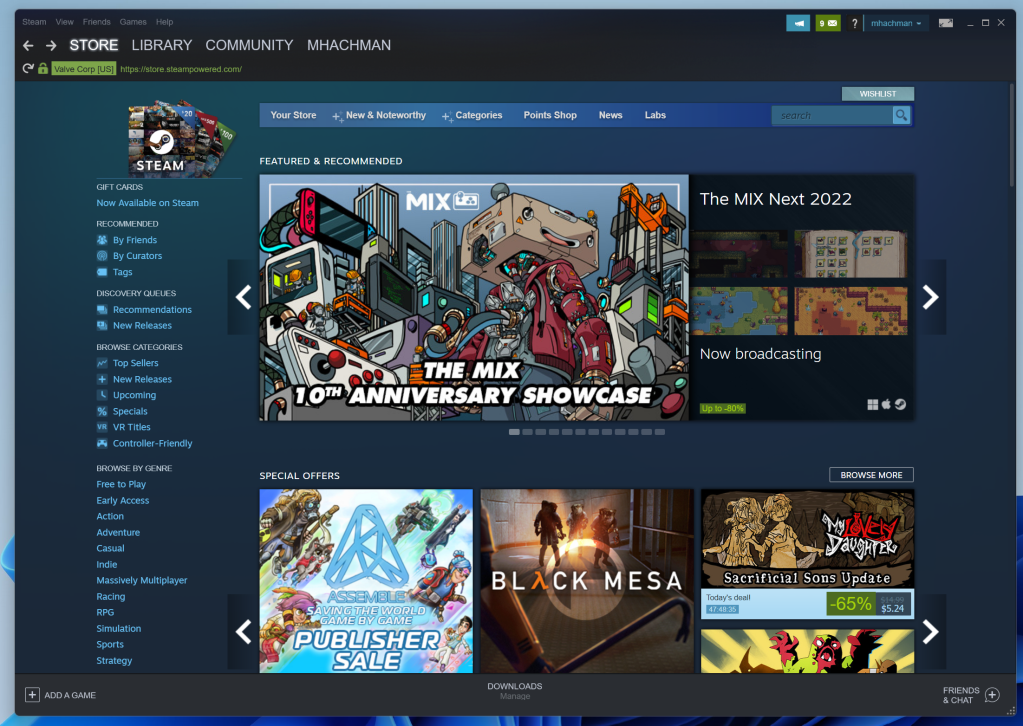 Today marks the first time that Chromebooks can be used as gaming PCs, with Google releasing instructions on how to run Valve Software’s Steam on a small suite of Chromebooks.

Last week, Google stated its intention to port Steam to Chrome OS, a commitment that would add value to high-end Chromebooks. On Tuesday, Google said that beginning with Chrome OS 14583.0, the Dev Channel of Chrome OS would include an “early, alpha-quality version of Steam” on Chrome OS for a “small set” of recent Chromebooks.

Valve’s Steam software serves as both a digital storefront as well as an update client for Valve’s games as well as third-party games. On Chromebooks, the Steam client will run the games—currently a list of 48, including Celeste, Disco Elysium, Portal 2, TEKKEN 7, The Elder Scrolls V: Skyrim Special Edition, and The Witcher 3: Wild Hunt—on a list of seven Chromebooks.

In a blog post announcing the release, product manager Zach Alcorn was explicit: “Alpha means anything can break,” he wrote. “Due to the inherent instability of the Dev Channel and the in-progress nature of this feature, we don’t recommend trying this on a Chromebook that you rely on for work, school, or other daily activities. You will encounter crashes, performance regressions, and never-before-seen bugs—that’s part of the fun!”

What you’ll need to run Steam on a Chromebook

First, you’ll need a supported Chromebook. Only the following Chromebooks are currently supported:

Each Chromebook needs to have an 11th-gen Core i5 or i7 processor inside of it, along with Iris Xe graphics and at least 8GB of RAM. Any Chromebook in the list with 4GB of RAM or a Core i3 won’t be supported. (In an indicator of the potential bugs you may face, Google notes that there’s currently an unexplained issue with devices with exactly 8GB of RAM in games that require at least 6GB of RAM.) Google doesn’t put any constraints on the display resolution, but notes that any display that supports a higher resolution than 1080p may have issues.

After you switch channels to the Dev Channel, you’ll need to type chrome://flags#borealis-enabled into the URL bar, then set the value to “Enabled.” Restart. After you restart, enter a terminal with CTRL+ALT+T and then type insert_coin volteer-JOlkth573FBLGa and hit Enter. You’ll then be asked to move through the setup process.

What games can Chromebooks play on Steam?

Google has provided a list of the currently available games. The idea, of course, is that the list will expand over time.

Most of these games will run under Linux. Occasionally, though, you may have to enable Steam Play, a tool that will leverage a compatibility tool called Proton.

While you can enable Steam Play on a game-by-game basis, you can also turn it on globally, too. Here’s how:

In the top-left corner of the Steam client, select “Steam”
● Select Settings
● Select Steam Play
● Check Enable Steam Play for all other titles
● Select a version, such as Proton Experimental

Google isn’t making any claims about the games’ performance right now, only that they’ll (hopefully) run. Remember, you also have the option of running games in the cloud to offload a game’s processing requirements onto a remote server through Xbox Cloud Gaming or another solution.