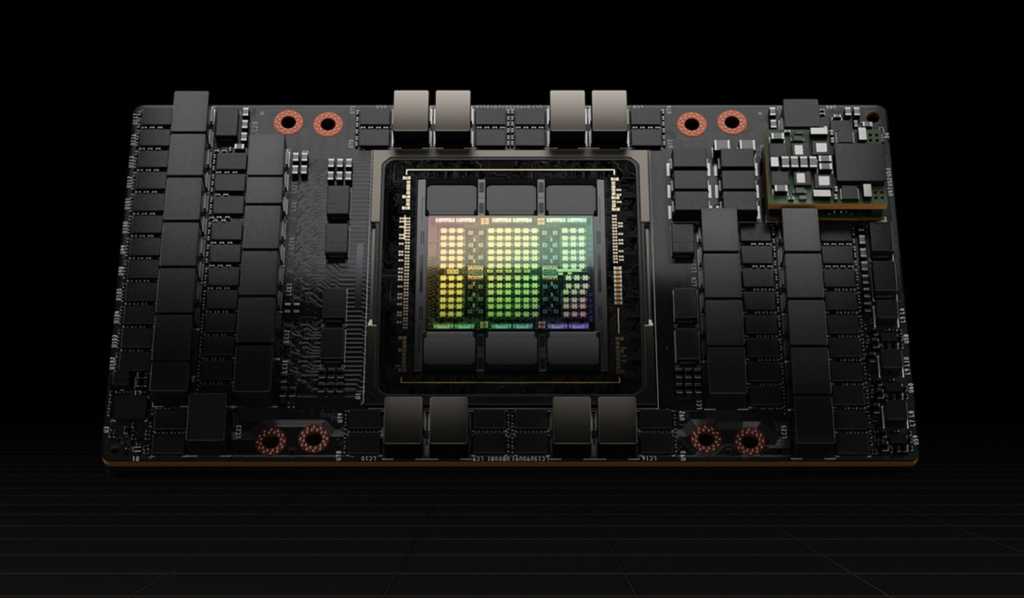 Welcome to the next generation of GPUs. During his GTC 2022 keynote on Tuesday morning, Nvidia CEO Jensen Huang formally revealed “Hopper,” the graphics architecture powering the company’s next generation of products, and welp, it looks like an absolute monster—at least in data-center form.

Introducing new architectures at GTC is par for the course for Nvidia; Ampere, Volta, and Pascal also stepped into the spotlight there. And just like with those past reveals, while the H100 is heavily specialized for data-center uses, with a tensor core-laden hardware configuration designed to optimize deep-learning tasks, that doesn’t mean we humble PC gamers can’t infer some information from Hopper’s AI-centric reveal, even if the RTX 4080 and its ilk wind up running on a different “Lovelace” architecture like some current rumors suggest.

Nvidia’s RTX 20-series “Turing” GPUs were built at TSMC, the fab that also builds chips for AMD, Apple, Intel, and virtually all bleeding-edge technology companies. But the Ampere GPUs inside the GeForce RTX 30-series switched to Samsung’s 8nm process instead. They delivered ferocious performance, but also drew ferocious amounts of power.

For Hopper—or at least the H100—Nvidia returns to TSMC. This chip is built using a custom version of TSMC’s 4N process, which is a more power-friendly version of TSMC’s N5 process. AMD’s RDNA 2-based Radeon RX 6000-series graphics cards swiped the power efficiency crown from Nvidia, and the next generation for these rivals look like they’ll all be crafted by TSMC. That’s no guarantee—the Ampere-based A100 was also built at TSMC, unlike its RTX 30-series siblings—but the current spate of rumors all point to it. Game on.

AMD’s Radeon RX 5000-series cards were first to the PCIe 4.0 punch, but Nvidia raced past it for the PCIe 5.0 pole position. The H100 is the first graphics processor built with the even-faster interconnect technology, and since Intel’s 12th-gen Core processors recently brought PCIe 5.0 support to mainstream desktops, there’s every reason to believe that Nvidia will include it when next-gen GeForce GPUs appear.

3. Pedal to the metal

The H100 is incredibly optimized for data-center tasks, and Nvidia (oddly) didn’t divulge any information about CUDA core counts, clock speeds, or GPU die sizes—all of which would provide much deeper clues into what to expect from futuristic GeForce cards. But the specs the company did reveal show that Nvidia isn’t afraid to go big with Hopper.

Pushing all those transistors to peak performance requires a lot of power though. Nvidia says the H100 draws up to 700 watts, a staggering 300 watts more than the fastest A100 chip. Holy moly. That doesn’t necessarily mean that RTX 4000-series GeForce GPUs would be gas guzzlers too, but current rumors suggest that Nvidia’s next-gen graphics cards will consume a lot of power. Seeing the H100 draw so much wattage lends credence to that claim, though we’ll have to wait for a formal reveal of next-gen GeForce graphics card to know for sure.

What we still want to see

Pretty much everything. The GTC reveals of past Nvidia architectures provided much greater detail about core count and clock speed, which gave much deeper insight into what to expect from their consumer-focused GeForce cousins. Rumors of the RTX 4080 and its siblings running on a different “Lovelace” architecture also muddy the waters. The H100 is slated to hit the streets in the third quarter, and we’d expect to hear more about next-gen GeForce GPUs sometime around then as well. Stay tuned!