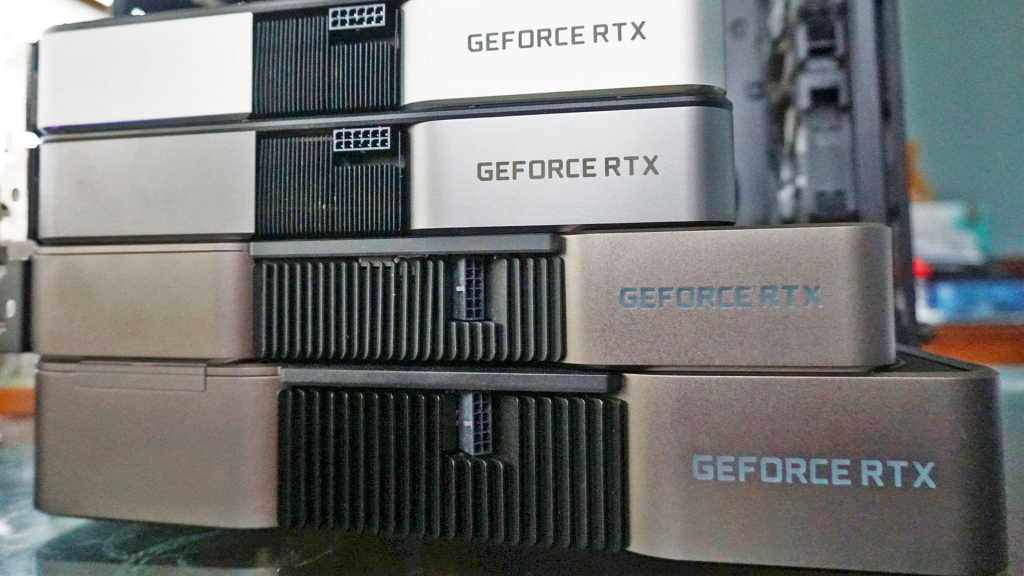 Earlier this week Nvidia kicked off its GTC developer’s conference with a public presentation. On the same day the company held an investor call, explaining to people with enough money to make Solomon blush why Nvidia should get some more of it. The call is mostly dry financial statistics, but one slide is causing the gaming world to take a closer look. In the gaming section of the call, Nvidia said that gamers who upgraded from a previous-gen desktop graphics card to a GeForce RTX 3000-series graphics card are spending a lot more than in previous years.

“Based on our data, [gamers who upgrade] are spending $300 more than they paid for the graphics card they replaced,” said Nvidia Senior Vice President of PC Jeff Fisher. The statistic on the presentation slide was similar: “GeForce DTR Gamers Who Upgrade to NVIDIA Ampere Architecture SPEND $300 MORE Than on Prior Graphics Card.”

That statistic seems like a no-brainer to anyone who’s tried to shop for a graphics card in the last few years. The prices of graphics cards themselves are rising with inflation and the chip shortage, and that doesn’t take external factors into account. A rampant market for “scalper” resellers and competition for supply coming from the cryptocurrency industry are driving street prices into the stratosphere.

PCWorld reached out to Nvidia for clarification on the statistic. A representative told us that the $300 increase is based on the MSRP, not the street price for the card. So if an average PC gamer spent $400 on a GTX 1070 card in 2016, they spent $700 on an RTX 3080 in 2021… and that’s before accounting for any increase in prices due to shortages and scalpers. (Just for context, the RTX 3080 is going for about $1200 online today.) It speaks to a dramatic increase in the costs of PC gaming for the same relative performance level as the industry progresses.

Boasting that gamers are having to spend more money on upgrades might seem a little tone-deaf in the current market. Heck, on the same slide Nvidia admits that less than a third of gamers who use their cards have upgraded from the GTX series to the RTX series, three and a half years after the debut of the RTX 2080. But this was presented in an investor call, not a general press conference like those seen at GTC. It is, at the core, all about the money.

That probably won’t stop gamers from feeling a bit miffed at this statistic presented while the graphics card shortage is still very much in effect. Speaking as someone who paid more than double retail price for an RTX 3070, I can’t say I blame them.