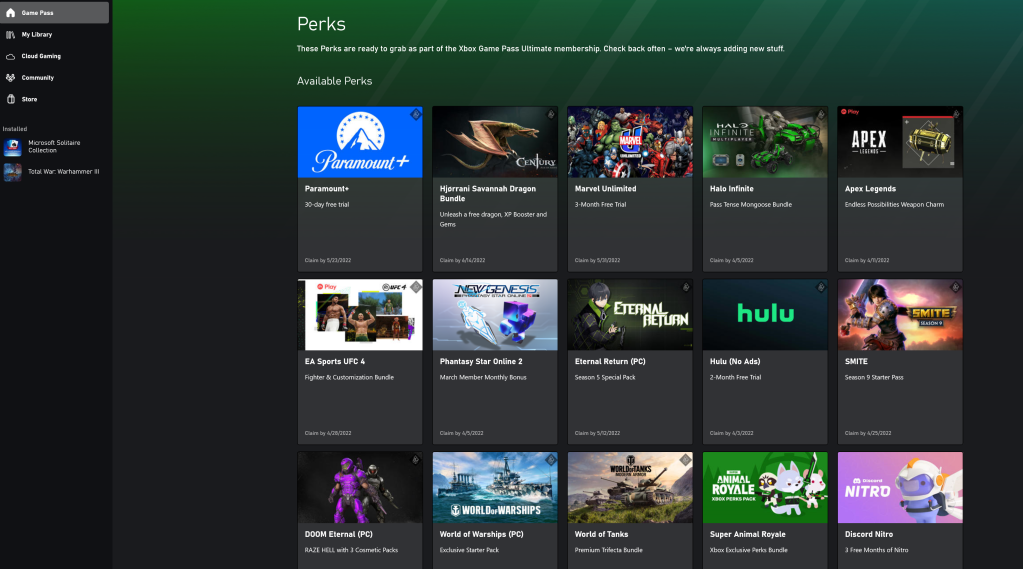 If you’ve wondered whether the new Halo TV series is any good, you’re in luck: Microsoft is making a one-month trial subscription to Paramount+ a “perk” of Game Pass Ultimate, and tossing in a three-month trial to Marvel Unlimited’s digital comics subscription service as well.

If you subscribe to Microsoft’s Xbox Game Pass Ultimate, you may have noticed reminders about “perks” that are available as a, well, perk. If you haven’t, try opening up your Xbox app within Windows, then navigate to the Game Pass subheading on the left-hand nav rail. There’s a similar section within the Xbox console UI, which also tends to push reminders to the “front page” of the console.

In any event, you’ll need to claim both perks by the final weeks of May, which we’d recommend: The Halo series comes out in weekly installments, with eight episodes in all. By May 23 (when the Paramount+ perk expires) all of the series’ eight episodes should have dropped.

Microsoft periodically refreshes its Xbox Game Pass Ultimate perks, which currently include various skins and upgrades for Halo Infinite, Apex Legends, Phantasy Star Online 2, and more. There’s also trials for both Spotify as well as an ad-free version of Hulu that are worth checking out.

Normally, Game Pass Ultimate costs $15 per month, but you can take advantage of two ways of getting it for next to nothing: either use our trick to pay for Xbox Live Gold and upgrade to Ultimate for dirt cheap, or use Microsoft Rewards to get it for free.