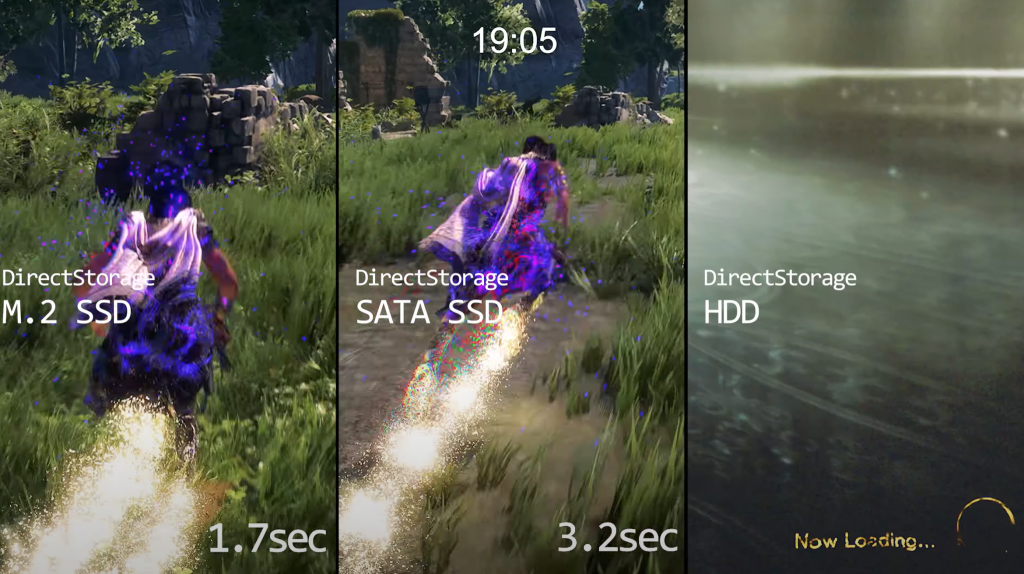 We always knew Microsoft’s upcoming DirectStorage technology would be fast, but how fast? Fast enough to load a game in just over a second, if a demonstration of an upcoming game, Forspoken, is any indication.

Microsoft released its DirectStorage API about two weeks ago, which allows the GPU to talk directly to the SSD to load games and textures without needing to pass through the CPU and main memory. At the time, we didn’t know which games would support it or exactly how quickly the technology would serve to load games.

A video of Forspoken, an upcoming game from Luminous Productions, tells us specifically how fast DirectStorage will be under three scenarios: running DirectStorage on an M.2 SSD, on an SATA SSD, and from a traditional hard drive. The results are tremendous. The game loaded in an astounding 1.9 seconds on the M.2 SSD, and roughly twice as slow on a SATA SSD, at a still-plenty-fast 3.7 seconds. Loading the game on a hard drive, though, required a less tolerable 21.5 seconds to load.

The game also showed off a similar loading scenario on another scene, with similar results. We’ve included the Forspoken video below, along with how it implements variable rate shading, FidelityFX, and more.

PCGamer dove in a bit deeper, noting that Luminous revealed that data transfer with compression is just part of the story, with the DirectStorage API boasting a file IO speed of 4,839MB/s against the Win32 API on the same drive coming in at 2,826MB/s. Luminous developers told a GDC 2022 audience this week that the game needs to be optimized, including how it handles graphics decompression. Fortunately, Microsoft has already told us that its roadmap includes just that, so we can conclude that performance should definitely increase. We also know that DirectStorage will be available for Windows 10.

We have to echo a call from PCGamer, though — if you haven’t done it already, it’s time to ditch your spinning hard drive in favor of an solid-state drive. May we suggest you buy one of our recommended SSDs?