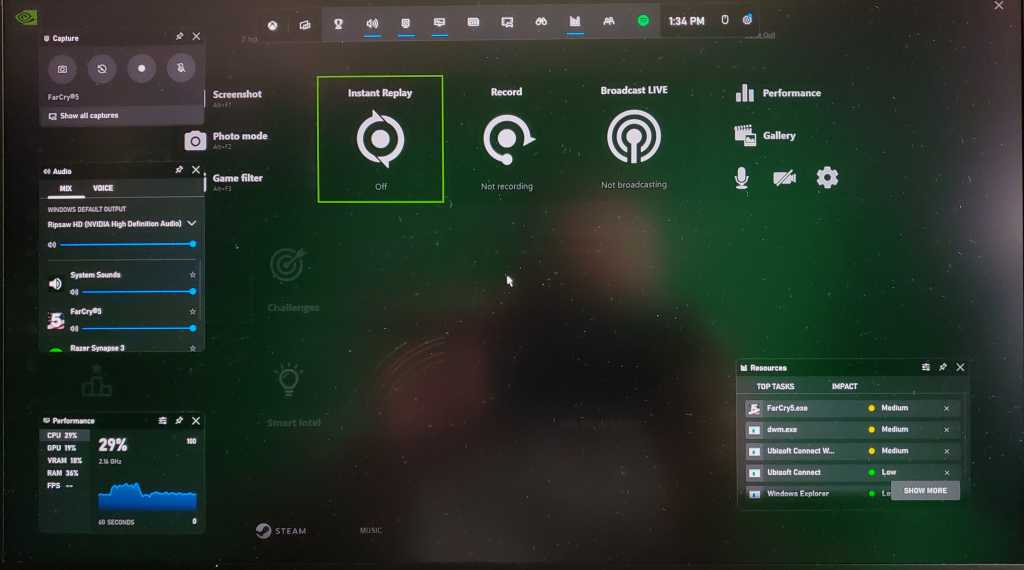 The first time I experienced an in-game overlay—a 3D interface rendered over the 3D interface of a game—I thought it was great way for accessing information without alt-tabbing out of the game. The second time made me realize I would never remember the complicated Ctrl Backslash Tilde key combo to access the overlay. Skip a few years and in-game overlays has turned into the proverbial pop-up ad of PC gaming, with every vendor trying to outdo the other other.

Don’t believe me? On a “clean” gaming laptop with just Steam loaded, I found no less than four different overlays: Steam’s (Shift+Tab), Ubisoft’s (Shift+F2), Microsoft’s Xbox Game Bar (Windows+G) and of course, Nvidia’s (Alt+Z). That’s pretty insane when you consider all I was doing was testing Ubisoft’s Far Cry 5 on the laptop.

Mind you, I didn’t install any of these game overlays, they’re just included by installing the software. It’s also clear there’s far more out there too. AMD’s default Radeon overlay is a memorable (Alt+R). Discord includes a game overlay (disabled by default but Shift+Tilde when on) and Good Old Games (GOG) Galaxy uses (Shift+Tab). Epic Games also has an overlay for Friends, but only in games that supports it (Shift+F3). If you’re one of the few people still running Electronic Arts’ Origin launcher, you’ve got one too (Shift+F1). While calling game overlays ‘pop up ads’ is probably over the top, they can get that annoying when you have an overlay on top of the overlay, on top of the overlay you’re trying to reach.

Which overlays would I keep?

To be fair, I do find game overlays to be valuable. Butt they’re probably more akin to streaming services than pop-up ads. So which ones would I keep? The Netflix of overlays is clearly Nvidia’s GeForce Experience overlay (Alt+Z). You’re going to keep it even if you think it’s gotten a little tired. If you run AMD Radeon graphics, its Adrenalin Software Overlay also counts (Alt+R).

I’m a fan of MSI’s Afterburner, but that probably doesn’t count as an overlay of annoyance since you have to install it intentionally and it takes quite a few steps to setup, including picking a default overlay hotkey. Still, let’s make that a solid No. 2 because of its popularity and utility. Steam, Ubi’s, GoG and Origin’s overlays can take a hike if you ask me as they don’t seem to offer much utility and no one—no one—can remember their hot keys.

Microsoft’s Xbox Game Bar is likely the most annoying of the overlay features because it gets in your face to let you know that it exists seemingly every time you launch a game (Nvidia is also guilty of this if you have GeForce Experience installed). I never use the Game Bar and would dump it overboard unceremoniously but it may actually be the best place for all vendors to stuff their overlays. The Xbox Game Bar, for example has overlay widgets you can install for Corsair’s iCue, as well as EVGA’s Precision X and Razer’s Cortex. That’s far preferable to having to remember NZXT’s Cam (Ctrl+O) or Asus’ GPU Tweak II (Ctrl+Alt+T).

Microsoft has managed to convince some third-party hardware vendors to roll support for the Game Bar overlay instead of going their own way. For example, Corsair, Razer, and EVGA are now offering overlay support through Game Bar. I find that far more useful then each hardware vendor looking to offer their own overlays. NZXT, for example, has its own CAM overlay feature (Ctrl+O), Asus has GPU Tweak II (Ctrl+Alt+T) too. Other hardware makers likely have their own overlays I’m sure but I don’t care because I’m over having to load up and memorize yet another set of cryptic Ctrl+Alt+A-Z commands.