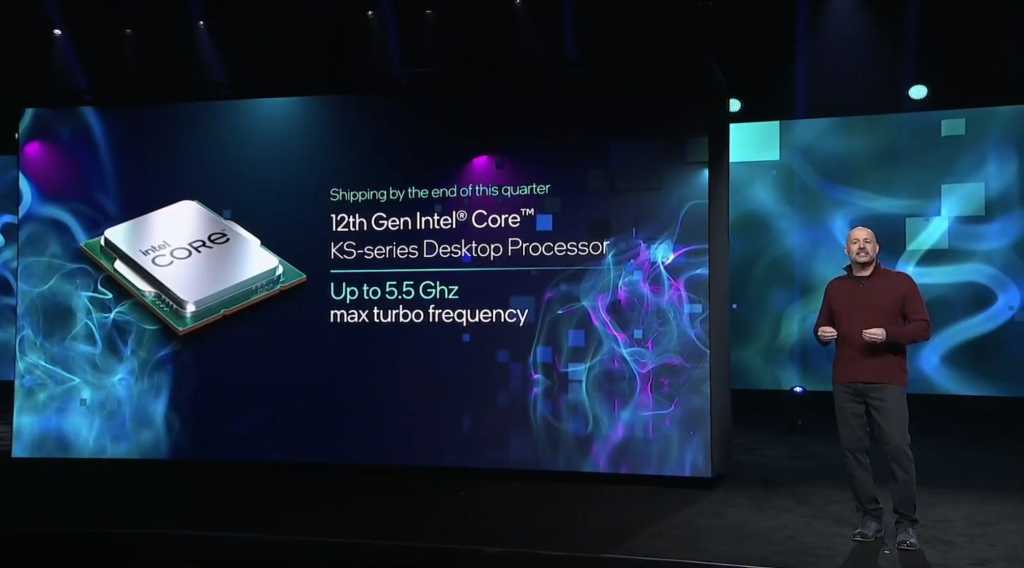 The new fastest gaming processor in the world surprise dropped this morning, as Intel’s even-faster Core i9-12900KS surprisingly showed up on Newegg with no warning, fanfare, or (as far as we can tell) independent reviews. Update: However, Newegg has now yanked the listing from the site after several hours.

Update: This article originally published on Friday, March 25. On Monday, March 28, Intel formally unveiled the Core i9-12900KS. It will launch on April 5 with a suggested $739 price tag. Our original article continues below with minor tweaks to pricing notes.

Intel’s ferocious Core i9-12900K already topped the frame rate charts, ripping the gaming crown back from AMD’s killer Ryzen 5000-series CPUs when it launched last fall. The KS version (presumably) is culled from the best of the best of those chips. It features the same underlying silicon configuration—8 Performance cores, 8 Efficiency cores, and 30MB of L3 cache—but reaches even higher maximum clock speeds. While the vanilla 12900K tops out at 5.2GHz on the gaming-centric P-cores, this new KS part hits a whopping 5.5GHz, just like Intel promised when it teased the 12900KS at CES in January. The 12900KS also has slightly higher base and all-core boost clocks.

The bleeding-edge speeds don’t come cheap though. The vanilla 12900K already costs $611 at online retailers like Amazon and Best Buy, and the KS costs an bowel-clenching $739, and $800 in the original early Newegg listing. Oof.

Hitting 5.5GHz is certainly a milestone technical accomplishment, but the minor increase in clock speeds aren’t likely to result in a major performance increase in games, which may be why the Core i9-12900KS launched with no warning or reviews. That said, this surprise release is probably a key gamesmanship win in Intel’s fierce battle with AMD.

AMD’s radical Ryzen 7 5800X3D was just given an April 20 launch date. The manufacturer plopped a massive slab of additional L3 “V-Cache” right on top of that chip’s die, which it says greatly enhances gaming performance. In fact, They were touting it as the “world’s most advanced desktop gaming processor,” claiming that it delivers “the fastest 1080p gaming across select titles when compared to others in the market” when the street date was announced.

Yes, that meant the vanilla Core i9-12900K. Well, now there’s a new biggest gun in the market. Game on. We’ll have to see how all the benchmarks shake down for both processors in the coming weeks, but in the meantime, we (like always) advocate waiting for independent reviews of the Core i9-12900KS’s chops before you drop a staggering $739+ on a gaming chip. The Core i7-12700K already nipped at the 12900K’s heels and it’s going for under $400, after all.