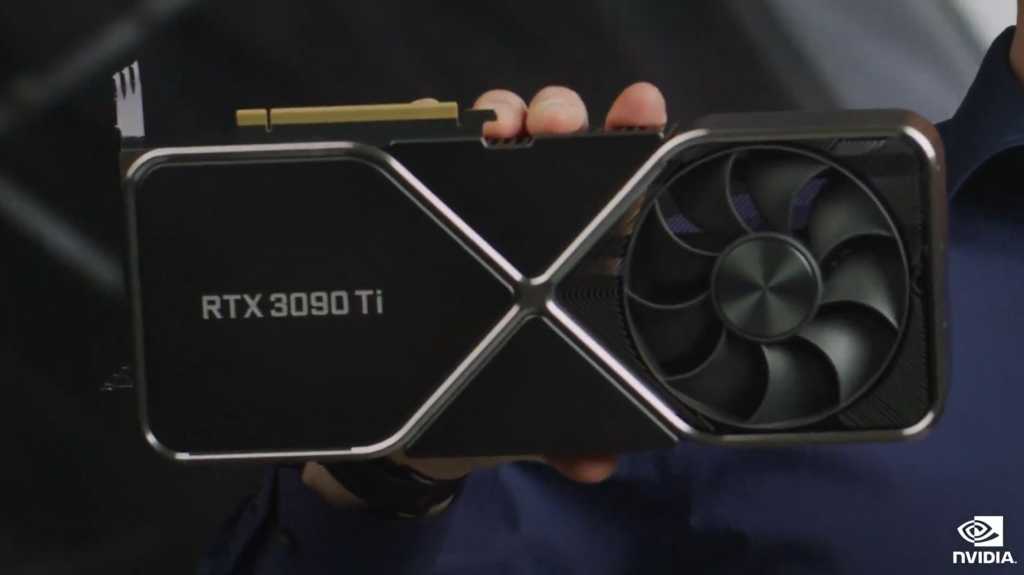 Nvidia’s monstrous GeForce RTX 3090 Ti has finally been released, and beyond all the hot takes over its cost and practicality for gamers, one of the main lessons to know is that you’re going to want a bigger power supply.

You can read news of the mightiest GeForce GPU here, but one thing that’s clear is that you don’t want to scrimp on power. Nvidia recommends a minimum PSU size of 850 watts, which is a 100 watt increase over the original GeForce RTX 3090 requirement.

That rough estimate, however, is really just an estimate. The card itself has a maximum rated power consumption of 450 watts, which is almost a 30 percent increase over the 350 watt TGP of the RTX 3090. it also assumes the Founders Edition card is paired with a 10-core Core i9-10900K. Though that’s no efficient CPU, there are CPUs that use more power. Intel’s Core i9-11900K, for example, has been tested under heavy AVX512 workloads by Anandtech’s Dr. Ian Cutress to reach 290 watts at the socket.

That’s roughly 750 watts for the CPU and GPU, leaving 100 watts to run fans, cooler, SSDs, hard drives, motherboard and the all important RGB lighting in a system. When you factor in that power supply efficiencies tend to drop as the ambient or room temperatures increase, you’d be running that 850 watt power supply right to its margins on some days when pushing both CPU and GPU hard.

This scenario also assumes you’re running the new GeForce RTX 3090 Ti at stock speeds, with a stock CPU. Overclocking can push power consumption up even further. In its review, Gamers Nexus found an overclocked EVGA GeForce RTX 3090 Ti reaching 500 to 530 watts. Overclock an Intel 11th-gen CPU or 12th-gen CPU with that GPU and you should probably skip right past Nvidia’s recommended minimum PSU of 850 watts to be safe.

What happens if throw caution to the wind and your new GPU overloads the power supply? In theory, not much more than triggering the power supply’s protection circuits, causing it to shut down. Most of the time, that means you just lose what you were working on and potentially corrupted the OS. That assumes you’re using a power supply that’s been properly designed and built which can’t always be guaranteed.

Half-glass empty or half full?

Before you start reaching for a beefy 1,600 watt power supply, you should realize that how large of a PSU you pair the 3090 Ti with should depend very much on what you’re doing. Sure, a heavy stress test of the GPU being run at the same time as a heavy stress test of a high-consumption CPU is likely to push that 850 watt PSU to the edge, but in reality, playing games, or doing content creation on a system is unlikely to stress both the CPU and the GPU simultaneously enough to put the average person in the red zone.

And yes, an 11th-gen Core i9 overclocked guzzles power, but AMD’s Ryzen 9 5900X is far more efficient under load. Overprovisioning a power supply can’t hurt (except for your wallet), especially if you have plan to load up a PC over time, but most people are likely fine with a quality, name-brand power supply at Nvidia’s 850 watt rating.

For everyone else though—especially those who push it to the limit—you’ll likely want to take up a notch.