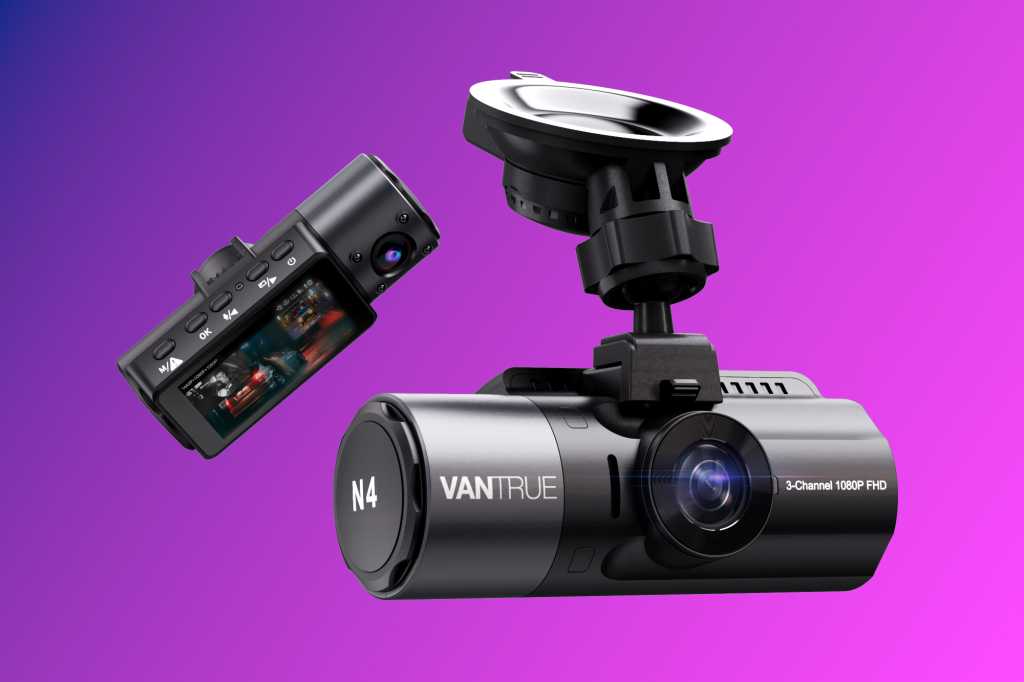 Vantrue
At a glance

Vantrue’s N4 is the most affordable three-channel dash cam we’re aware of. It captures at 1440p in three-channel mode, and 4K when you drop to two.

If you like the idea of total (or near-total anyway) coverage inside and outside your vehicle, you won’t find a cheaper way to scratch that itch than Vantrue’s OnDash N4. This three-channel front/rear/interior unit has the rather nice price of $260 though a GPS mount is another $22.

Note that the dash cam I tested is the one found when you click on the Dash Cam tab, then N4 from Vantrue’s website. Browsing around Vantrue’s site, I stumbled on another N4 product page with different specs. The distinction is that the model I reviewed—presumably the more current model—has 4K support. Even still, that spec is a bit misleading when expressed as “3-channel 4K.” While the N4 can indeed capture 4K UHD front video, it can only do so when capturing front/interior, or front/rear—i.e, in two-channel mode, not three-channel.

Note also that the industry generally refers to only the front camera when advertising resolution. Interior and rear cameras are invariably lower resolution when 4K is touted.

At just over 4 inches long and 1.5 inches deep and wide, the flattened-cylindrical N4 is a bit on the large size. It has to be to fit both the front and interior cameras, as well as a crisp 2.45-inch IPS color display. It’s not a monster by any means, but it’s not svelte like Garmin’s Dash Cam Tandem. 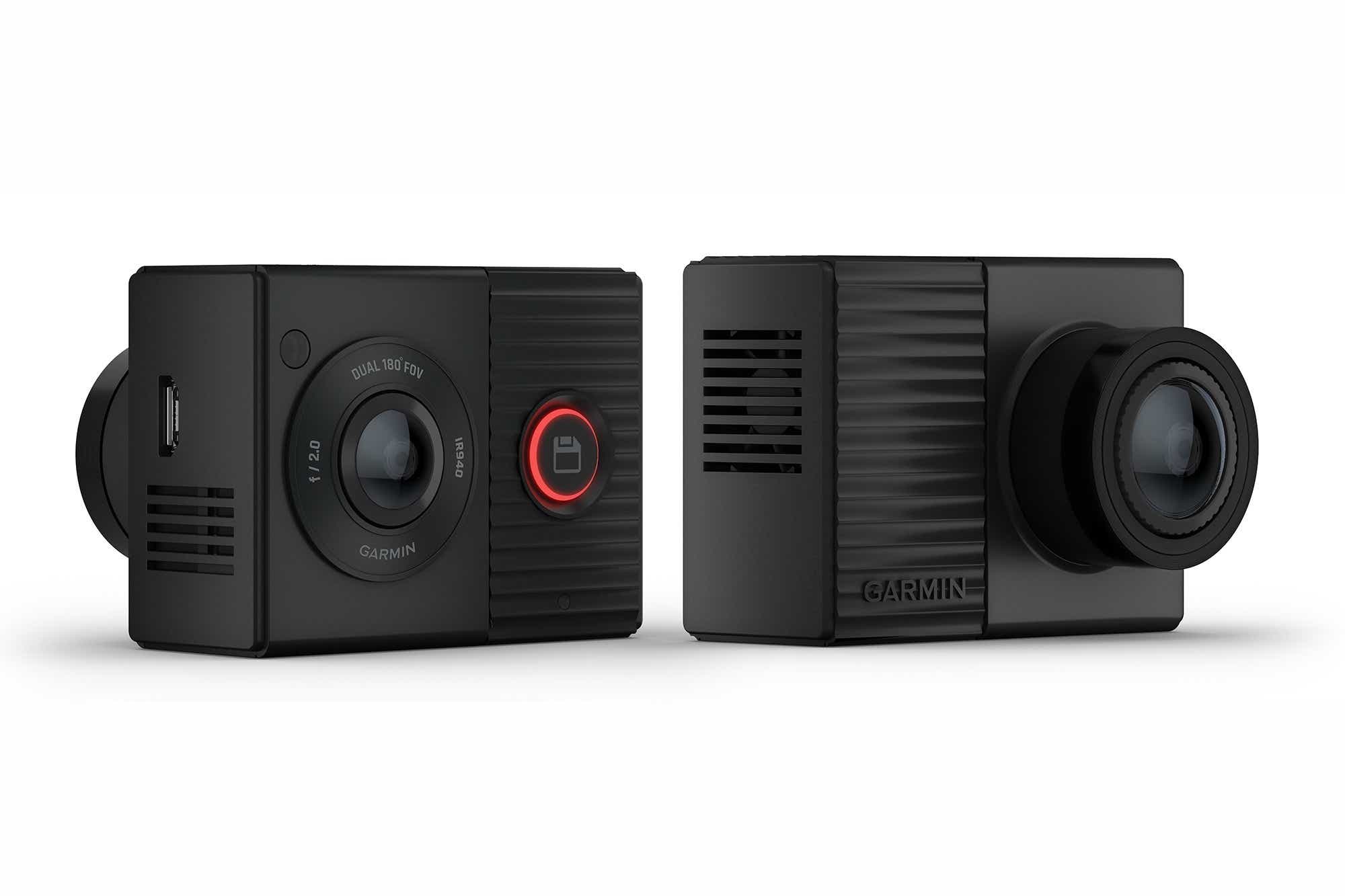 On top of the unit are five buttons (menu, okay/record, left, right, power) to navigate the onscreen menus. Said menus are logically organized and easy to browse. On the left side of the main body you’ll find: a USB Type-C port for the rear camera or attaching the unit to a computer to offload video; a micro-HDMI video port for outputting to a TV, etc; an SD card slot; and a tiny reset button.

There’s nothing on the right side, but on top is the connection for the included suction mount, which is fully adjustable horizontally and vertically. The entire deal is powered via another USB Type-C port on the mount. The nub for that port also serves as a handle to rotate the mechanism to help secure the suction cup to the windshield.

The front camera is 2160p/30 frames per second maximum (when recorded alone) with a field of view of 155 degrees, but as mentioned, drops to 1440p when both the interior and rear cameras are also in use. It will stay at 2160p when used with either the interior or rear cameras, but drops from 30fps to 25fps.

There are four infrared lights surrounding the vertically swiveling interior camera to augment night captures in the cabin. Alas, Vantrue doesn’t enable them by default so my first night captures were darker than they should’ve been. Vantrue should make a greater effort to make the N4 usable under all conditions right out of the box.

The power cable is auxiliary (cigarette lighter) to Type-C and a 20-foot cable is provided to connect the rear camera. It’s that long because you’ll likely be snaking it around/under seats, up and inside interior moulding, or both. As with most dash cams, a moulding spudger/crevice tool is provided.

The rear camera is prominently labeled, something I truly appreciate. I’ve installed less obviously labeled units upside down on accident. Tip: If you have a rear camera that doesn’t make its orientation apparent, attach it to the main camera, power it on, and note what’s shown on the display before sticking it in place. (Nearly all use sticky pads.)

There’s no SD card included with the N4. Speaking of which, you’ll be using a lot of storage with three channels constantly running, or simply capturing 2160p. Buy as large as you can.

Onboard is a super capacitor rather than a battery for more charge cycles and a broader operating temperature range (14 to 158 degrees Fahrenheit). Unusually, it keeps the display running for a second or so after power is pulled, meaning it’s of decent capacity. Many last only the milliseconds it takes to close the current video.

I first tested the N4 as a three-channel camera, resulting in 1440p front captures. Overall, the 1440p/1080p quality is acceptable if in no way competitive with the pricier, but excellent Cobra SC 400D. I then switched the camera to front/rear only and grabbed some 2160p footage from the front. 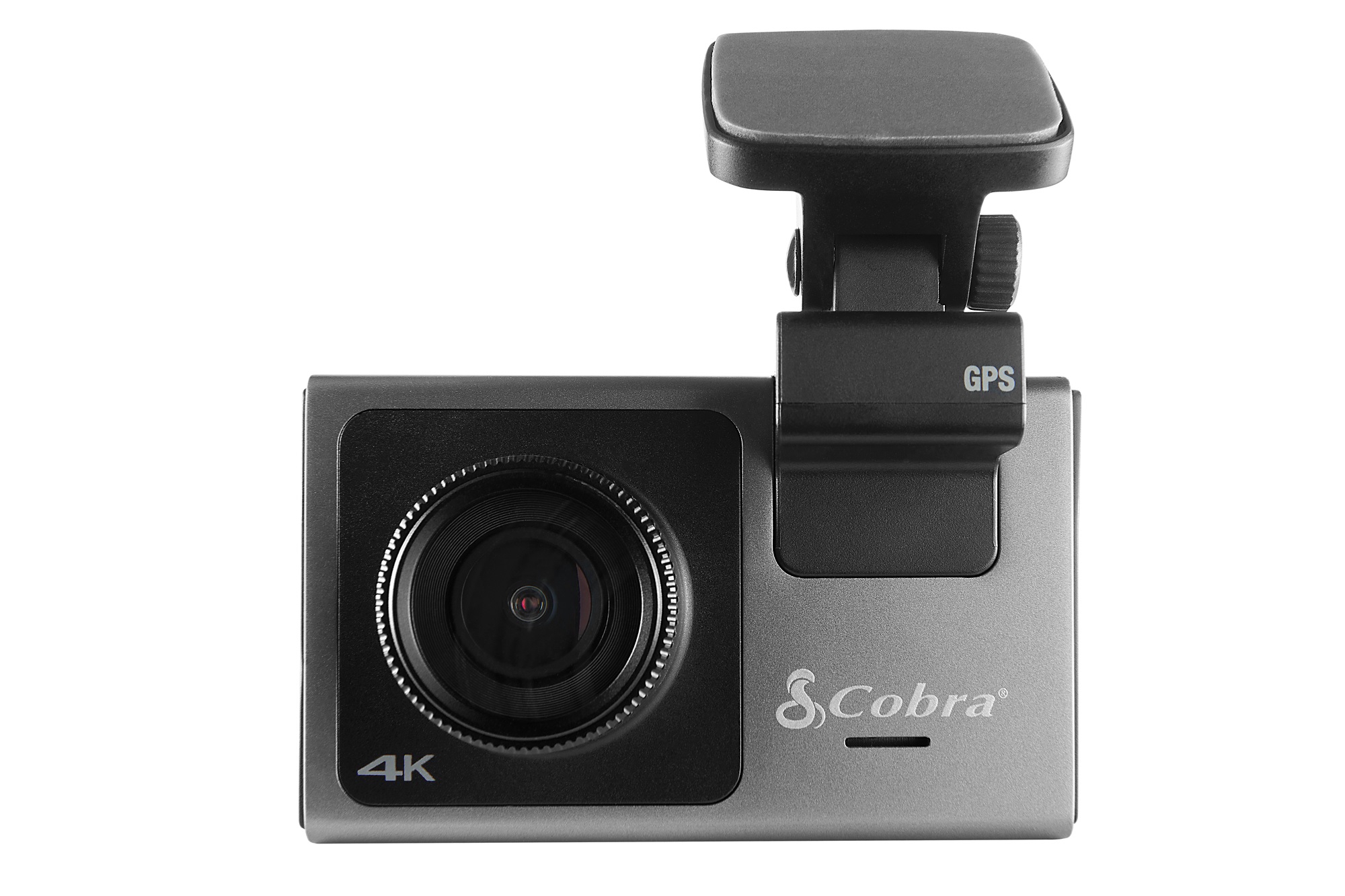 The color is spot on in both cases, but I found the detail in all the captures a bit blurry for the resolutions involved—especially the interior and rear cameras. Vantrue seems to opt for smoothness over sharpness in processing the captures. Either that, or it’s in the optics or sensors. I have noticed recently that the cameras with Sony sensors do lean towards removing jaggies.

Right-click on the images and select “Open in new tab,” then switch to the new tab to see them full resolution.

The wide FOV for the interior camera (shown below) makes sure you will capture all of the cabin no matter how large the vehicle. I left the power wire dangling to spare you from yet another gaze at my mug.

There’s quite a bit of fisheye from all the cameras. The wide fields of view (FOV) makes sure you’ll capture more events, but it does result in this type of artifact. The interior and rear camera details are rather muddy for 1080p captures. The rear camera shot below also is a bit lacking in detail overall. That’s one of our building’s security guards checking to make sure Giants fans from the stadium just down the street aren’t using our parking.

Night captures are more of the same. There’s good if not fantastic detail on the front captures, but interior and rear captures are slightly muddy. Also, headlight flare is more intense than with some cameras. Note that some of the distortion is due to the night conditions here in foggy San Francisco.

As with the day captures, there’s a certain bluriness to the rear camera’s night captures. You’ll need to be very close to pick up details such as license plate numbers.

As mentioned, for some reason, Vantrue doesn’t set the infrared lighting to auto or on by default. Hence the dark capture shown below. Expecting the infrared to work automatically, I had to head out on yet anther evening to capture with the infrared on.

Below is the result from my second foray. I stepped outside as I’m tired of looking at myself in these photos. Note that you can actually now tell that there are seats in my MX-5.

One small issue with the N4 is that it doesn’t automatically start recording when you exit the settings menus as most cameras will. You have to hit the okay/record button. I missed a lot of captures initially because of this. Niceties.

As long as you understand that the N4 is 1440p when using all three channels, it’s a good deal, though it would be a better one with GPS already on board The captures are hardly the best we’ve seen, but they’re colorful and present a serviceable amount of detail. A competent if not spectacular camera system for a good price.