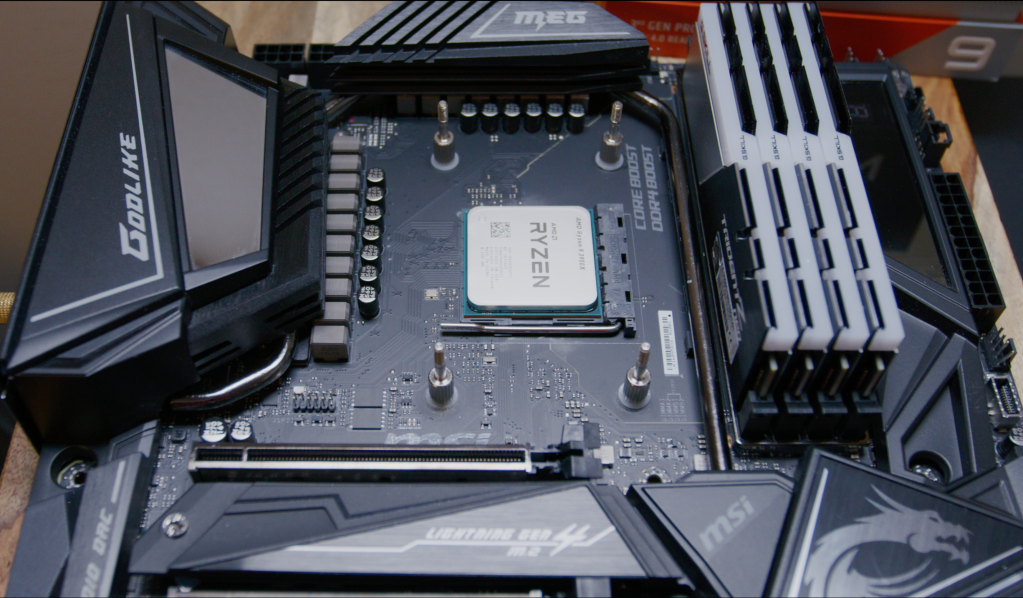 Thiago Trevisan / Foundry
At a glance

If you’re sticking with Ryzen 5000, MSI’s X570 Godlike is one of the best options out there thanks to its inclusion of high-end features.

MSI’s X570 MSI Godlike motherboard does not want you to confuse it for a mere pedestrian “Extreme” offering—judging by its name alone. If you’re planning to bring a high-end Ryzen CPU to worship at its altar, it will have plenty of features to satisfy.

With Z690 competitors already offering next-gen specs such as DDR5, does an X570 high-end motherboard such as this still make sense? We’ll discuss the specs that may entice you, must-have features, the design, and value for your dollar.

The “Godlike” series of motherboards have been around a long time, my favorite being the X99 version. The idea is simple: Pack as many features and design elements that someone might want into one killer package. We recently covered the Asus Z690 Extreme, which follows the same mantra.

Packing a $699 MSRP, here are some of the main specs to consider in your decision making:

The above specs represent what the Godlike is all about: features, features, and more features! It’s an ideal option for both workstation use and gaming use.

Gaming use takes advantage of high-end CPUs such as the AMD Ryzen 9 5900x and 5950x, with great VRMs and overclocking support. You’ll also get plenty of fan and water-cooling headers, plus temperature sensors. This is augmented by great RGB options—with headers for addressable RGB, 4-pin, and even Corsair-specific inputs. SLI and NVLink afficionados (I know there’s still one or two of us left!) will appreciate the 4-slot spacing for multi-GPUs.

You’ll get similar gaming performance on cheaper X570 motherboards, so having extra features unique to your use case are the main reason to pick this. Workstation use is where you’ll really see a difference – plenty of m.2 ports for fast PCIE Gen 4 storage, 10Gbe networking, and the cherry on top – CPUs such as the 5950x which give phenomenal multi-core performance on a mainstream platform for reasonable cost.

There are some downsides, however. You’ll have a paltry amount of USB ports on the back: only five USB-A and a single USB-C. There’s no Thunderbolt available onboard, either.

With a name like Godlike, you bet the design must also impress. The first item that catches your eye is not the RGB, but the evenly spaced four PCI-E slots—you know it means business! The RGB and OLED panels are tastefully done, and fairly understated for the most part.

You’ll be able to customize the OLED panel and display system information and custom graphics. This “Dynamic Dashboard” looks very cool! The industrial, grayscale design of the M.2 and chipset covers are also an elegant monochromatic look.

The X570 Godlike does have a chipset fan behind a grill, which can be RPM controlled. It’s positioned lower on the motherboard, so thick graphics cards are less likely to obstruct the airflow. Below it you’ll also find physical buttons for reset and power, which look great and are highly functional design elements.

Such a plethora of unique features on a single motherboard is a big reason to opt for the Godlike. The downside: It’s more expensive than a less generously appointed option. Here are some of its more unique selling points, to further augment the spec rundown above:

You’ll also get access to the MSI Center software, which includes features such as system fan tuning, auto overclocking, and RGB light configuration. This was previously called Dragon Center but has since been upgraded and improved. Your mileage may vary with this software, as even on high-end motherboards included software can often be buggy and temperamental.

The X570 Godlike is most at home with the highest-performing Ryzen 9 CPUs—such as the 5900x and 5950x. The recently released 5800X3D is also a perfect fit. With 14+1+1 phase VRM, you’ll likely be limited by other CPU bottlenecks before the motherboard is ever an issue.

Memory support is great here, too. You’ll get MSI’s “DDR4 boost with Steel Armor,” which basically separates the DIMN slots to keep them shielded from any interference.

You’ll get dual BIOS support, which is essential when you’re tinkering and crash the system. Having the physical buttons, such as power, is also a “godsend” on this motherboard, especially for those on a test  bench.

The BIOS is easy to navigate, and gives you plenty of deep tinkering tools for those who want it. For others who just want to set it and forget it, it can do that too, such as easily setting XMP profiles or auto overclocking.

$699 is expensive for a motherboard, but the MSI Godlike delivers on a good balance of features and performance. It may even seem like a bargain when compared to the newer Z690 Godlike, which retails for well over $1,000. (It does have newer PCI-E Gen 5 and DDR5, however.)

Also keep in mind that X570 will be soon replaced by the next AMD chipset, so your upgrade path ends with Ryzen 5000.

If you snag a good deal on it, it has some key selling points that are still highly attractive. Very few options on the market will give you the right mix of features like this one has. 10Gbe networking, lots of PCI-E slots, and robust M.2 support, to name a few.

Another point to consider: Ryzen 5000 is highly discounted right now. While the motherboard is still expensive, you may offset some of those costs by saving hundreds of dollars on a CPU such as the 5950x or the 5900x. You’ll also be able to use readily available DDR4, as opposed to more expensive DDR5 options. Certainly, if you’re sticking with Ryzen 5000, it is one of the best options with its array of high-end features.