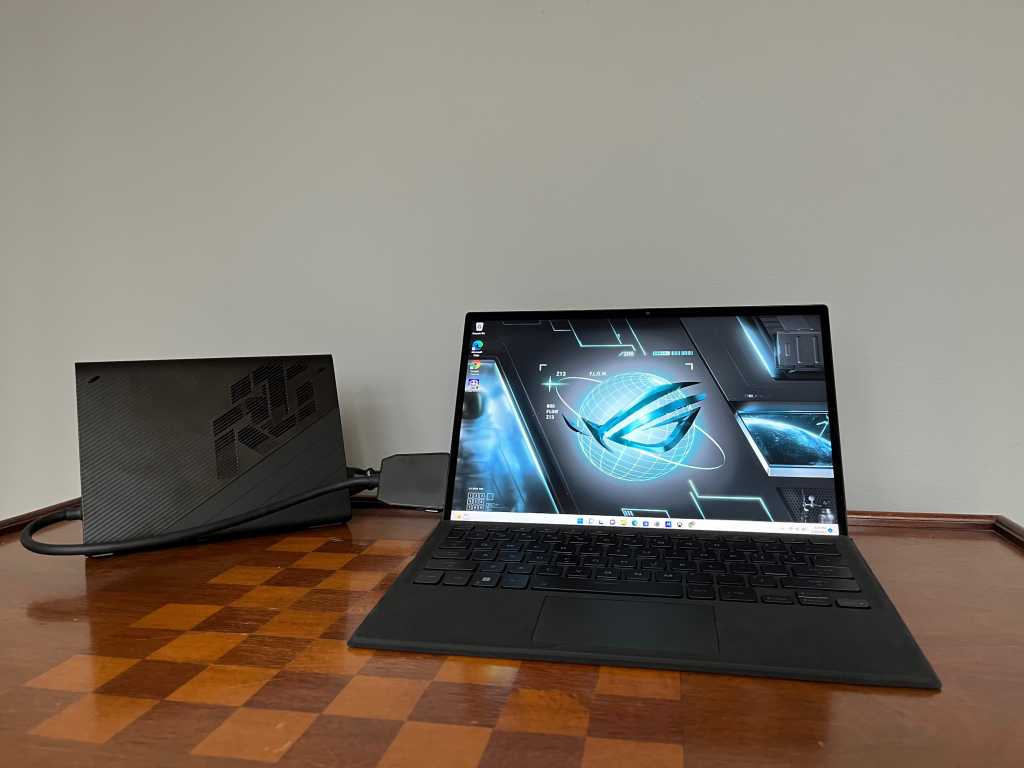 The company’s second attempt at a gaming tablet, the Asus ROG Flow Z13 offers greater versatility but remains a specialized and expensive system.

The modular Asus ROG Flow gaming tablet just got more modular. Last year’s ROG Flow X13 featured a convertible 2-in-1 design with a 360-degree hinge that let you rotate between laptop and tablet modes. The new ROG Flow Z13 ditches the display hinge and opts instead for a detachable keyboard that can act as both an ultraportable laptop with its kickstand kicked out and a tablet with the keyboard detached and not swung around and stuck to its back.

In addition to tweaking the design, Asus also upgraded the internals. For the biggest upgrade, the ROG Flow Z13 swaps out the middling GeForce GTX 1650 Max-Q GPU of the Flow X13 for RTX 3050 Ti graphics. This allows for greater gaming capability. And, should you reach for a AAA title that needs more muscle than the internal GPU can provide, the Z13 can connect to Asus’s eGPU module, the XG Mobile. This device bumps the graphics up to Nvidia’s potent GeForce RTX 3080.

Despite its more modular approach and upgraded internals, the Flow Z13 remains a specialized product for a narrow audience that wants or needs an undersized gaming laptop that can convert into a tablet and is willing to pay a premium for that mobility and versatility. The internal RTX 3050 Ti graphics lessen the need for the optional XG Mobile unit, a pricey add-on that really lets the Flow Z13 rip.

Asus sells a handful of Flow Z13 models. Pricing ranges from $1,499 to $3,299 with Intel Core i5, i7 and i9 CPUs offered and either Nvidia GeForce RTX 3050 or RTX 3050 Ti 40-watt GPUs. Our $1,899.99 test configuration features one of Intel’s latest and fastest CPUs, the 12th-gen Core i9-12900H. The chip features six performance cores, eight efficiency cores, and 20 processing threads. Some lower-cost models feature only 8GB of RAM and a 256GB SSD, but our test configuration doubles up on both for an ample allotment of RAM and a fair amount of solid-state storage space. The optional XG Mobile eGPU with RTX 3080 graphics adds $1,499.99 to the bill.

You can view the Flow Z13 as an ultraportable laptop or as a thick, heavy tablet. The 13.4-inch display is smaller than most gaming laptops, which typically range from 14 to 17 inches in size. However, the tablet itself is half an inch thick and weighs 2.6 pounds, making it considerably heftier than most tablets. Despite its generous weight and thickness, the tablet doesn’t look or feel clunky. It’s made from high density aluminum alloy 6063, which gives it a rock-solid feel without even the slightest hint of flex.

Asus has made clear with its design that the Flow Z13 is a tablet built for gaming. The back of the tablet is littered with design elements geared toward gamers. The back panel is matte black with narrow vents on the top half arranged in rows and some grouped into an “06” shape, perhaps as a nod to the 6063 alloy used. There’s a small, red tab on the side of the kickstand that’s useful for flipping it open. The kickstand has a cutout around a window that provides a glimpse of the motherboard inside. The window comes complete with RGB lighting for added fun and gamer chic.

The RGB lighting extends to the detachable keyboard. Its keys feature one-zone RGB lighting that can be customized with Asus’s Aura Sync panel inside the Armoury Crate app. The keyboard may have only one zone of lighting, but the effect and color you choose extends to the small window on the back panel. The keys themselves feature narrower travel than that of most laptops and especially gaming laptops, but overall it feels snappy and responsive.

The keyboard sits at an angle and is never lying solid and flat against your desk. Combined with the thin nature of a detachable keyboard, the keyboard really starts bouncing around when you’re furiously mashing keys during intense moments in games. The touchpad is undersized and best for navigating windows. For longer gaming sessions, you’ll definitely want a mouse and also a separate keyboard.

The tablet itself has a USB-A port on its right side for connecting either a mouse or keyboard, and right next to it is an audio jack for plugging in headphones. You’ll also find the power button and a volume rocker on the right side of the laptop. The power button doubles as a fingerprint reader for quick and secure logins.

The Flow Z13 features a microSD card slot and I had to be a bit of a sleuth to find it. It’s hiding behind the kickstand on the back panel.

On the left edge of the tablet, you’ll find a USB-C Thunderbolt 4 port and a rubber cover, behind which hides a PCIe port for connecting the Flow Z13 to the XG Mobile eGPU module. There’s a USB-C port you can use for charging the tablet or connecting to USB devices as long as the XG Mobile isn’t being used, as it connects to both the ports.

To keep the Flow Z13 plugged in while gaming with the XG Mobile, you’ll need to use the Thunderbolt 4 port, which creates a bit of a messy look because the power cable isn’t connected to the bottom of the tablet. Instead, it hangs off the side from the Thunderbolt port that’s nearer to the top.

The XG Mobile adds extra ports to complete a gamer’s setup with connections for a mouse and keyboard, an external monitor, and a wired network connection. It features four USB-A ports, HDMI and DisplayPort connections, and an Ethernet jack. It also features a little kickstand so you can prop it up at a jaunty angle instead of having it lie flat.

The 13.4-inch display features a 1920×1200 resolution and a 16:10 aspect ratio. The resolution is ample to produce a crisp image. Asus offers a 4k display option for the Flow Z13, but it’s not a necessary upgrade. Plus, you’ll get better battery life with a lower-resolution display. The 4K display option also has a 60Hz refresh rate while our test system has a 120Hz refresh rate. Both options have adaptive sync technology, so gamers will appreciate being able to hit 120 frames per second without tearing the 1900×1200 panel.

The 13.4-inch size is smaller than most gaming laptops, which can make games feel a bit less immersive than they would be on a larger screen. The 16:10 aspect ratio of the display provides more vertical space than a wider 16:9 display, which gives you a little more room to work in Windows and requires less scrolling through documents and web pages.

The display is rated for 500 nits of brightness and our tests revealed it’s even brighter than the manufacturer claims. I measured the panel at a maximum brightness of 610 nits with good uniformity. It also exhibited accurate color and excellent contrast with deep black and bright whites. The touchscreen features a glossy coating, but this is one of the better displays I’ve experienced in terms of keeping glare and reflections in check. I suppose it helps to blast the brightness up to 500 nits and beyond to help control distracting glare or reflections, but the display overall is quite impressive. It also boasts narrow bezels and edge-to-edge glass for a clean, modern look.

The tablet’s stereo speakers produce average laptop sound. They will struggle to fill a small room at max volume, but the sound does stay clear when dialed up to its maximum. Bass response is predictably lacking. For gaming or listening to music, you’ll want headphones.

The Flow Z13 features both a front-facing and rear-facing webcam. The front-facing camera is an average 720p camera that produces a noisy, but well-balanced image that will suffice for the occasional Zoom call but isn’t ideal for streamers. You’ll get better results with the 8-megapixel camera on the other side of the display, but how often are you going to snap photos or take video with a tablet?

Our Flow Z13 test system features the Core i9-12900H (a high-powered CPU from Intel’s latest 12th generation of Core processors), 16GB of RAM, and a 512GB SSD. It features GeForce RTX 3050 Ti graphics at 40 watts. It’s one of the lower GPUs in Nvidia’s latest GeForce 30-series lineup, but it’s still much more capable than the previous-gen GTX 1650 Max-Q CPU in last year’s Flow X13. When you need to reach for more graphics horsepower, the XG Mobile kicks it up to RTX 3080 at 150 watts.

Our first benchmark tests how a laptop is able to handle crushing CPU loads over a lengthy period—in this case, transcoding a 30GB MKV file to a format suitable for Android tablets using HandBrake, the free video encoding utility. The Flow Z13 was a step slower than we would have expected on HandBrake, given its 12th-gen Core i9 CPU. It finished behind a trio of laptops with Core i7 chips.

Next up is Cinebench, another CPU-intensive test but one that renders a complex 2D scene over a short period of time. The Flow Z13 performed better on Cinebench. The 12th-gen Core i7-based MSI Katana GF76 edged it on the All Threads test, but the Flow Z13 took top honors on the Cinebench’s Single Thread test.

Multimedia tests are of some importance, but 3D graphics performance is paramount with the Flow Z13, so let’s jump in. On 3DMark’s Time Spy test, the system brought up the rear. Its RTX 3050 Ti GPU running at 40 watts couldn’t keep pace with the laptops that have higher-end RTX graphics or the MSI Katana GF76, which also features RTX 3050 Ti graphics but at 60 watts. On 3DMark’s Port Royal test, the Flow Z13 fared a bit better by edging the MSI Katana GF76.

For real-world game testing, we used Rise of the Tomb Raider at 1920×1080 resolution at the Very High quality preset and Metro Exodus at 1920×1080 at the Extreme quality preset. For each game, we tested the Flow Z13 first with its integrated 40-watt RTX 3050 Ti GPU and then with the XG Mobile attached that adds a jolt of RTX 3080 graphics at 150 watts.

We test laptop battery life by looping a 4K video using the stock Windows Movies & TV app, with screen brightness set to about 250 nits and the volume dialed to 50 percent with headphones plugged in. The Flow Z13 lasted just shy of six hours on our battery-drain test, which is average for a gaming laptop but a bit disappointing on a compact tablet.

Premium versatility at a premium price

With the ROG Flow Z13, Asus dropped the convertible design of last year’s Flow X13 in favor of a more modular, detachable design. This approach makes the Flow Z13 more useful as a tablet because you don’t have the keyboard rotated around and lying on the back of the display when in tablet mode. It’s less useful as a laptop, however, because the detachable keyboard is about as far from a gaming keyboard as you can get, RGB backlighting or no.

The upgrade to RTX 3050 Ti graphics and a 12th-gen Core i9 processor make the Flow Z13 powerful for its size, but it remains a specialized product for users with specific needs. You’ll need to have some deep pockets, too. But high-end tablets always come at a premium.

A similarly configured Microsoft Surface Pro 8, for example, would cost nearly as much as the $1,900 ROG Flow Z13 with a lesser CPU and merely integrated Intel graphics. In that light, the Flow Z13 represents a fair value if you want a Windows tablet that lets you dabble in some gaming when the workday is done. It also gives you the option to double down on its gaming capabilities with the RTX 3080-based XG Mobile, which allows the Flow Z13 to morph into a highly capable if undersized gaming laptop. At a combined cost of $3,400 for the Flow Z13 and XG Mobile, however, you must really have a need for such modular versatility to stomach the cost.