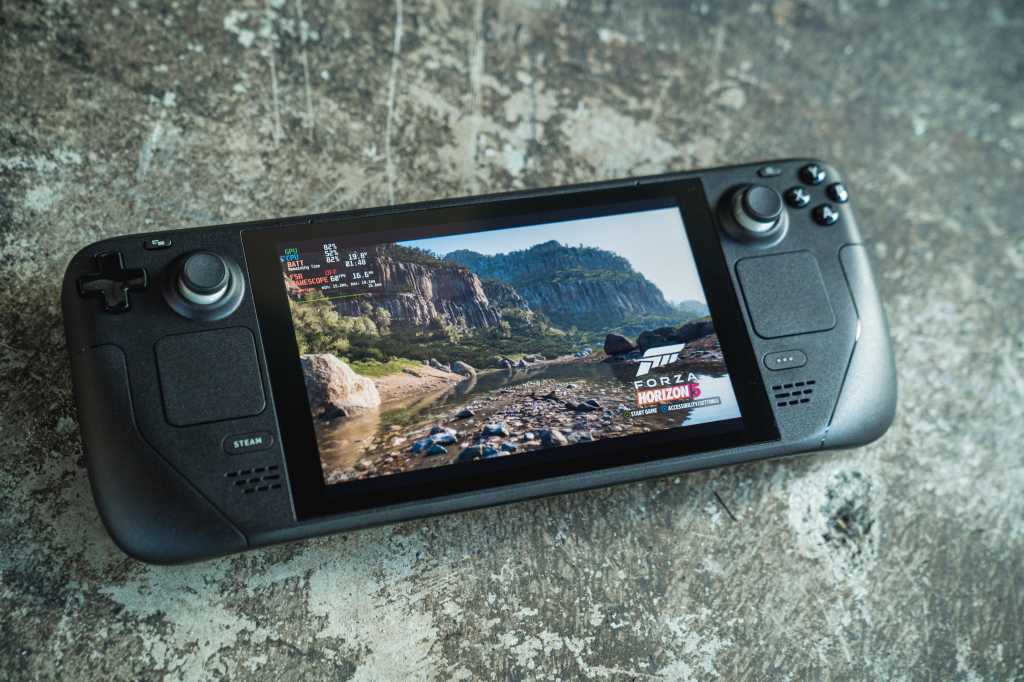 Thirty years ago, portable gamers were “enhancing” the Game Boy with massive amalgamations of lights, speakers, magnifiers, and control extensions to make the barely-pocketable device approximately the size of a toaster. It’s in that spirit of joyous anti-practicality that YouTube channel ETA PRIME attached a full-sized desktop graphics card to the Steam Deck. Yes, it’s exactly as ridiculous and wonderful as it sounds.

While the Steam Deck’s USB-C port can output video to its dock accessory, it isn’t a full Thunderbolt port, so it doesn’t work with the semi-standardized external GPU devices on the market. To get around this limitation, ETA PRIME (spotted by Video Game Chronicle) cracked open the Steam Deck’s case and attached a PCI extension adapter directly to the device’s M.2 storage expansion port.

To make this even more ridiculous, the 80mm adapter is more than double the length of the Steam Deck’s 30mm bay, so it had to be held in place with double sticky tape. The adapter itself requires external power, here provided by a standard ATX power supply running rails to both the adapter and the graphics card plugged into it.

Unsurprisingly, the AMD Ryzen APU-based Steam Deck doesn’t seem to want to play nice with Nvidia desktop cards. ETA PRIME tested with a Radeon RX 6900 XT — which is about twice the size of the Steam Deck even without the extra connection hardware. Without the internal M.2 storage, Windows had to be loaded onto a MicroSD card with a USB-C flash drive acting as supplementary storage. A USB-C hub was used for mouse and keyboard input, since actually playing with the Steam Deck’s rear open would be less than wise.

In short, it works. The RX 6900 XT setup is bottlenecked by the Steam Deck’s APU and the limited data bandwidth of the M.2 slot. But even so, benchmarks show approximately 4-5 times the graphical performance, allowing the tiny gadget to play The Witcher 3 in 4K at more than 100 frames per second. Newer games like Cyberpunk 2077 and Elden Ring showed poorer performance, but were still considerably better than the Steam Deck alone.

Should you create a Frankenstein monster of hardware to connect a desktop GPU to the Steam Deck? Of course not! Is it fun to watch someone achieve it? You bet! If nothing else, it shows that Valve might want to consider enabling standard external GPU support on future iterations of the Steam Deck hardware.