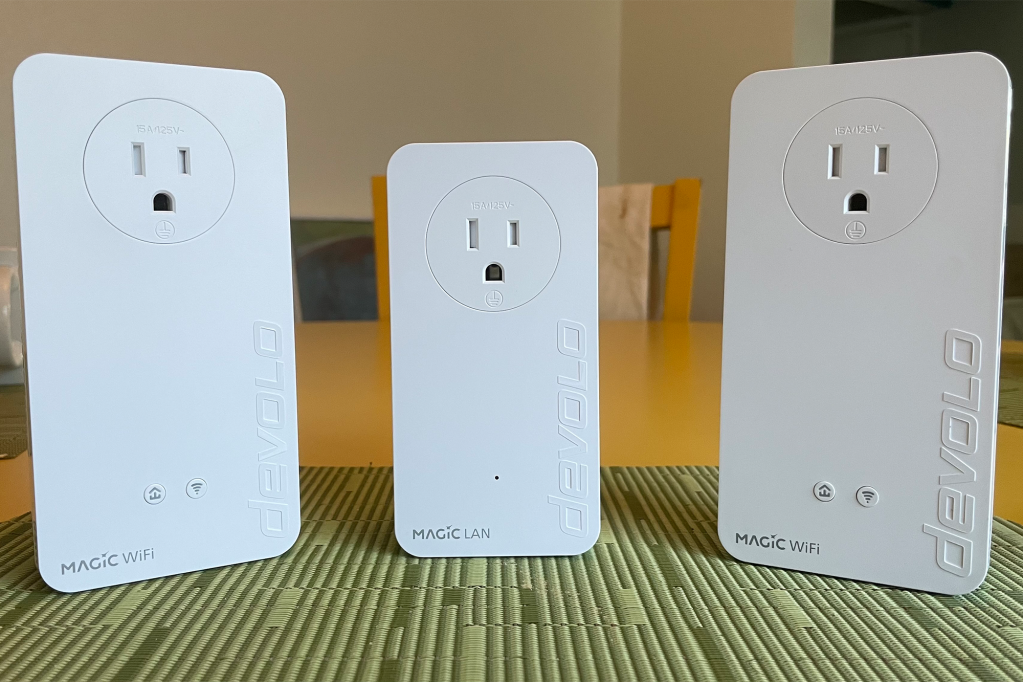 Wes Davis / Foundry
At a glance

Devolo’s Whole Home Wi-Fi Kit can be a convenient way to deploy a hardwire-like network using powerline technology via your power outlets, but it has some limitations that you need to consider before jumping in.

If you’re a networking nerd (there are dozens of us. Dozens!), you’ve probably encountered the term “powerline” in reference to router hardware. For the rest of you who have never heard of this, here’s the pitch: Imagine a Wi-Fi network where each node connects to the others by neither ethernet nor Wi-Fi, but instead by the electrical wires already coursing through your house. It seems intuitively insane, until you consider that power over ethernet exists. Why does it work, when there’s already electricity moving through the lines? Frequency! Power moves through your home at a specific frequency (60Hz in the USA), so for anything else to move over those wires with minimal interference, it just needs to operate at a different frequency, like cars driving down different lanes of a highway—generally between 2MHz and 86MHz, in the case of powerline adapters.

Devolo was kind enough to send us its Magic 2 Wi-Fi Next Whole Home Wi-Fi Kit, which consists of two Wi-Fi nodes and a gateway LAN unit. After about two weeks with the device, I came away intrigued, but I won’t personally be giving up my normal wireless mesh network anytime soon. We’ll get to why later—for now, let’s get some basic stuff out of the way.

Devolo Magic 2 Wi-Fi Next: What you get

As previously mentioned, the Magic 2 Home Wi-Fi Kit comes with two Wi-Fi nodes, which each look like a single-plug surge protector with two ethernet ports on one end. They’re brick-shaped, almost brick-sized, white, and they each have two LED indicator lights on them. The LAN adapter, for its part, has a single ethernet port and a pinprick status LED. Both the Wi-Fi adapters and the LAN adapter have an integrated three-prong plug on the back, so you’ll plug them directly into a wall, while the front of each device has a three-prong receptacle, allowing you to still use the outlet for electrical purposes. The Magic 2 Wi-Fi system is dual band, and supports Wi-Fi 5—the revisionist designation for 802.11ac. Its max channel bandwidth is 80MHz, and data rates for a single connection max out at a theoretical 1,200Mbps, with backhaul speed between nodes a max 2,000Mbps. I never saw this kind of speed, but that’s not surprising—my house turns 100 years old this year, and still has a lot of its original cloth-covered wiring.

Devolo Magic 2 Wi-Fi Next: The setup

Setting up the Devolo kit is fairly straightforward, though in my case it required a little bit of trial and error, as it didn’t work properly on the first go-around. When it works as intended, you simply plug in the wireless nodes wherever you intend to keep them, wait a minute for them to find each other (indicated by the cute little house-shaped LED on the front glowing white), then plug in your LAN adapter and hook it up to your existing router or modem via its ethernet port, and wait for its status LED to also glow white. Basically, it’s the reverse of the process you’d use to set up a normal mesh network, and this was not the only atypical part of the experience.

Placing the equipment was likewise frustrating, as it required me to completely reconfigure the physical makeup of my network. The LAN adapter for the system has only one ethernet port—its incoming WAN port—meaning I had to relocate the three smart home hubs I normally keep connected to my gateway Eero router. Though this is something to consider before buying, it won’t be problematic for everyone. Because of the higher backhaul throughput offered by the powerline connection between nodes, you’re free to rethink your topology: With my Eero setup, I keep one router in the centermost position possible, with satellites spread about the home to try to bounce a better signal where it’s weakest—with powerline, each node is getting better throughput than my wireless Eero nodes, so you can get away with access points that surround the centerpoint, rather than originating there.

If you really want to go nuts during setup, you can download the Devolo Cockpit app on your computer, which lets you quickly check the strength of the connection from one Devolo adapter to another, which is helpful for initial setup, letting you maximize throughput to each component of the system. Cockpit is also the easiest way to configure your devices from a computer, as hovering your mouse over each adapter in the app gives you the option to go to the configuration page for that device.

As routers go, Devolo’s system is pretty bare-bones when it comes to management software and feature set. Devolo’s phone app is how most people will likely interact with the network, and it provides the basic control that most will be looking for, allowing users to configure their network name, or SSID, and password. It also has some basic parental controls and Wi-Fi scheduling. The parental controls are going to be unintuitive for anyone not used to managing a network, as it requires the user to know the MAC address of the devices they’d like controlled—which means they need to know what a MAC address is in the first place, meaning for most people this feature may as well not exist.

Most routers with simplified controls in a smartphone app tend to offer more technical configuration via the web UI, but in Devolo’s case, you’re given the same options when you go to a device’s configuration page. You get some feature toggles like those for fast roaming or power saving, and you can do things like turn off a device’s status LED (every router should have this feature). But crucially, the router is missing the means to set up IP reservations, point your network to custom DNS addresses, or toggle UPnP—all of which are common options that slightly more technical users will want control over. Beyond WPA3 compatibility, there are also no other security features, so you won’t get some of the fancier ad-blocking or malware-blocking that is offered by the likes of Asus, Eero, or Netgear, among others, and you can’t do any manual domain name blocking.

I’ll cop to this being my first experience with any powerline router—as such, I wasn’t sure what to expect. I knew that older powerline gear tended to be pretty slow by modern standards, but I also knew that newer versions of the protocol can be much faster. Given Devolo’s claims about throughput being up to 2,000Mbps over electrical wiring, I figured it would have to be at least as good as my Eero network, if not better.

Testing generally bore this out, although the makeup of the system made it hard to do direct comparisons, as I couldn’t really set the access points of the system in the same places as my normal mesh router nodes. I placed the Devolo nodes as close to the same locations as I could, so we’re only talking about a couple of feet of difference, but that can still result in fairly large throughput differences. Because of that, you should take these numbers as an approximation of the relative performance (as with any router benchmarks performed outside of a lab). Throughout my house, while conducting throughput testing using the network testing tool iPerf 3, I saw generally good throughput that never dropped below 150Mbps—which you would hope for when all your devices are essentially hard-wired—with throughput hitting nearly 500Mbps while I was testing within a few feet of one of the nodes in my upstairs bedroom. Overall, the throughput and coverage was impressive compared to my Eero kit, which has more nodes but struggles to adequately reach some places in and outside my home.

That was all on the 5GHz band. 2.4GHz performance, which is always going to be slower, was only better than my Eero system in that upstairs bedroom test—otherwise, individual tests often dropped to the single digits in three out of my six testing locations. I live in an 1,800 square foot, 100-year old house, and the walls are thick, so this kind of performance can potentially wreak havoc on an extensive smart home environment, depending on what contributes to a low average: Is it consistent in its lower throughput, or is the average dragged down by sporadic, drastically slower performance? Thankfully, the Devolo Magic system, while slower on the 2.4GHz band generally, stayed on the consistent side.

Benchmarks completed, I moved on to putting the system through its paces in more real-world scenarios—streaming video, playing games, and so forth. I was able to stream video on more devices at once than any normal household would, and with no noticeable drops in quality. Most streaming services’ bitrate—that is, the amount of data conferred in a stream, as measured in Mbps—hangs out somewhere around 5- to 10Mbps, give or take, so you should be able to stream on several TVs at once with most routers on a solid internet plan. Next, I swapped networks to make the Devolo kit my primary mesh network, and this was where things fell apart for me. Things were fine for about a day, but soon after, I began to lose connection intermittently, then my connection altogether. I could restart the Devolo network and it would fix it, but only temporarily. I had so many issues that I had to demote the system back to only an alternate SSID for a few computers, a couple of game systems, and an Apple TV.

Devolo was kind enough to help me troubleshoot the issue, and the eventual conclusion was that there were three devices destabilizing my network. Given the number of older Wi-Fi smart home devices I have on my network, all of which I’m in the process of replacing, I can’t say I’m surprised there were some causing issues; however, no other router I’ve tested has had such problems. This should give anyone with a similar system pause.

In the end, the Magic 2 Wi-Fi mesh system feels like it’s an unfinished product, both because of the difficulty I had staying online when the Magic 2 was at the head of my network, and because of a UI that obscures or completely lacks the most important features. And, as a powerline system, the restriction that nodes be located at a power outlet that’s only about 18 inches off the ground can make placement tricky, particularly in older homes with fewer outlets. That said, if you have a more typical network that’s not littered, like mine, with finicky IoT devices, and you want something close to the benefit of a fully hardwired mesh network without all the hassle of running ethernet cables through your walls, this could be a great system for you. At $300 for a multi-room kit with two nodes and a LAN adapter, the Magic 2 is a bit pricey, but for some, the lack of hassle may be worth the premium.