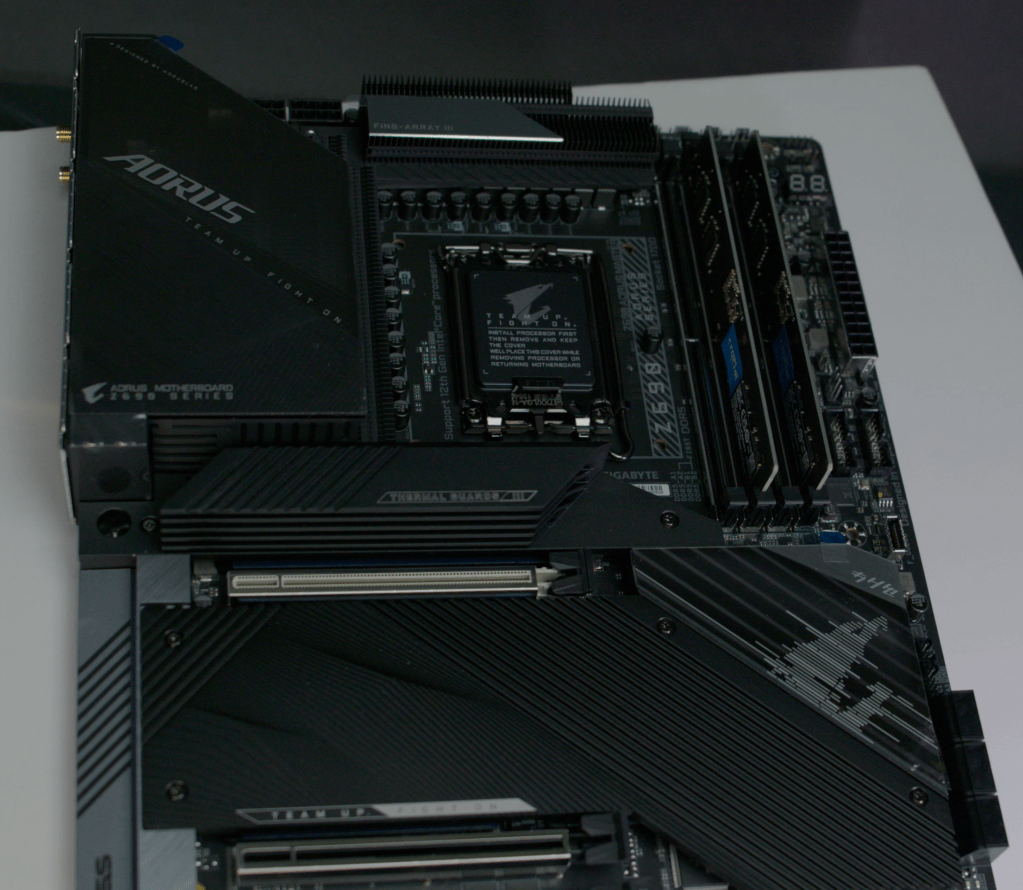 With a new age of tech finally reaching motherboards, the Gigabyte Z690 Aorus Master presents a pretty good value proposition that is chock full of features.

The introduction of Intel’s Alder Lake platform with the Z690 chipset brings with it exciting next-generation technology. PCI-E Generation 5 and DDR5 are among the headliners, with support for the 12900K CPU taking some of the limelight, too.

Of course, prices have also increased, and some of the new cutting-edge technology can have diminishing returns (and be confusing, such as varying support for DDR4 or DDR5).

I’ll go over the specs and feature set for the Z690 Master, what CPUs to pair it with, and whether it’s the right motherboard for you in this new high-tech environment. (Spoiler alert: It packs some features found only in much more expensive offerings!)

Much like the Asus Hero lineup of motherboards, the Gigabyte Master aims to please the enthusiast crowd without breaking the bank. Sure, the company’s Xtreme variants pack more features, but they’re often overkill. Do note that most MSRPs have increased since the previous generation, but the Master still comes in at a reasonable $469 (especially considering the feature set, as you’ll find out below).

Here are some important specs to be aware of for the Z690 Master:

This is where the magic happens, and how the Z690 Master proves itself as a good value, too. The spec list above is impressive, so let’s dig in to some of the highlights and digest their real-world perks (and downsides).

Beauty is in the eye of the beholder, and the Z690 Master certainly is attractive. At this price range, you’ll start to see design niceties such as “armor plates” for the M.2 and VRM regions, tasteful RGB and displays, along with typically higher build quality.

In fact, if you place the Master next to the much more expensive Z690 Gigabyte Aorus “Xtreme” variant, you’ll have to look hard to spot the differences. RGB is tastefully done on the motherboard, with two main areas that light up and can be customized with Gigabyte’s RGB Fusion software.

The Z690 Gigabyte Aorus Master is well equipped to handle even the spicy Intel 12900K. Packing 105a in its 19+1+2 power design, overclocking will be no sweat. This is certainly overkill, as the VRMs will remain decidedly cool. But we’re used to seeing overkill power stages on more higher-priced options, so it’s great to see it at this price level.

Ideally, this motherboard is paired with a higher-end Intel 12th-gen CPU such as the 12900K or 12700K. (Check out Gordon Ung’s 12900K review). But it packs an attractive enough feature set that those who don’t need tremendous CPU power may even opt for the 12600K and still get great performance (and access to 10GbE LAN, five M.2 slots, etc.).

If you do want to test those VRMs, the Gigabyte BIOS has improved over the years, making it generally easy to navigate and adjust settings as needed. There’s plenty of tinkering to do here, but keep in mind that modern overclocking has diminishing returns as these chips already run fast out of the box.

Memory XMP profiles work well with DDR5, with one caveat: Any Z690 motherboard at present has trouble with four sticks of DDR5 and XMP; you’ll be limited to base speeds. This can be a bummer if you’re looking at multiple sticks for higher capacity, so you’ll want to pick up larger capacity dual kits instead to maximize XMP speeds.

With a new age of tech finally reaching motherboards, the Gigabyte Z690 Aorus Master presents a pretty good value proposition that is chock full of features. For $469, you’re getting Wi-Fi 6E, 10GbE networking, five M.2 slots, and an attractive design. Sure, PCI-E Gen 5 and DDR5 are not mature yet, but they’re here and will give you some future proofing, too.

Keep in mind it’s a wider E-ATX setup and will require a CPU bracket for LGA 1700, plus DDR5 RAM. Otherwise, it’s a familiar experience that benefits from a generous feature set and an even more masterful pricing level.