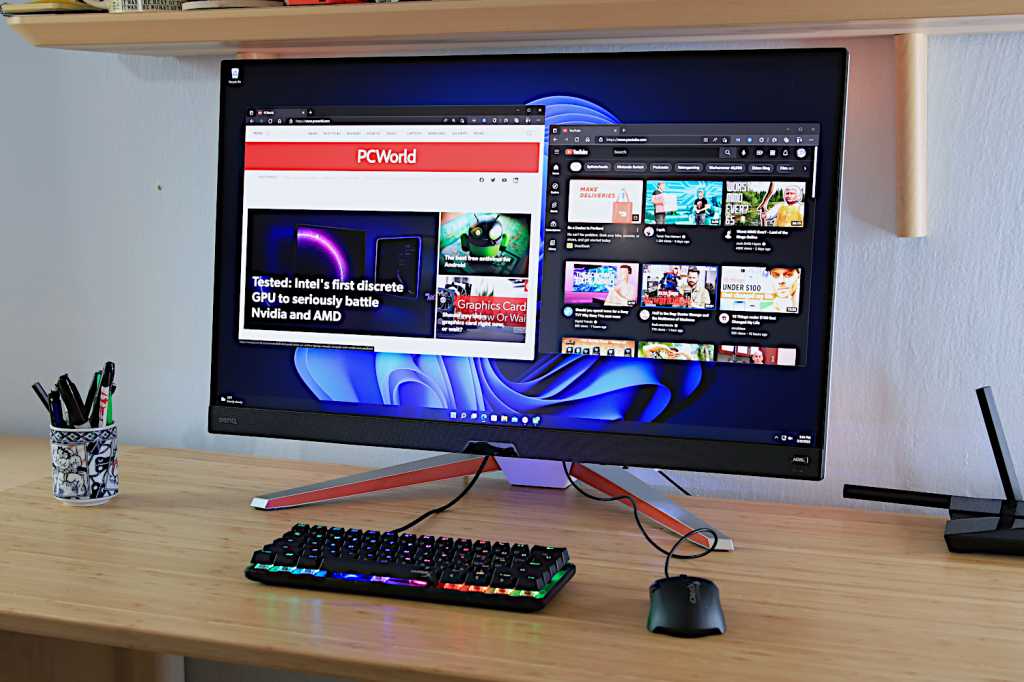 Matt Smith / Foundry
At a glance

BenQ’s Mobiuz EX3210U is another entry in the increasingly competitive arena of 32-inch, 4K, high-refresh monitors that target not just PC gaming but also current-gen consoles. The twist? It also packs features for content creators.

The BenQ EX3210U has a pair of HDMI 2.1 ports providing 4K/120Hz gameplay when connected to a PlayStation 5 or Xbox Series X game console. DisplayPort 1.4 is offered for PC gamers and ups the maximum refresh rate to 144Hz.

In addition to high refresh rates, this monitor boasts an extremely wide color gamut and a 10-bit panel. This means it can display 1.07 billion colors without using dithering to simulate colors. That’s great news for color performance, though the EX3210U’s image quality is far from perfect.

BenQ’s Mobiuz gaming sub-brand is not the most attractive monitor line today, but it’s close. It has a clean, angular presentation common to the gaming space, but pairs this with a distinctive white-and-orange color palette.

This helps the EX3210U stand out from the crowd, yet remains subtle enough to fit in with a professional home office. A custom RGB accent light is available to spice up your gaming space after dark but can only be controlled manually through the monitor’s menus. It’s off by default.

The monitor is massive and sturdy, with a weighty stand that provides height, tilt, and swivel adjustment. Build quality is top-notch, nearly on par with Alienware’s best. However, like Alienware’s displays, the sheer size and heft of the BenQ EX3210U isn’t for everyone. This 32-inch monitor takes up a lot of space and does nothing to minimize its footprint on your desk.

It’s good to see four USB-A 3.0 ports, but they’re all located on the rear I/O panel, which makes them hard to access. There’s no USB-C and no support for DisplayPort-out. The competition also lacks these features. Still, given the EX3210U’s price, it would be nice if BenQ served up some extras.

On-screen menu controls are robust but confusing. The monitor includes multiple gamma and color-temperature settings plus custom color adjustments, though these have vague labels. The monitor also has a dedicated sRGB mode, which is useful if you need to restrain the monitor’s wide color gamut. However, these features are accessed as sub-menus for specific preset picture-quality modes, which adds an extra step to finding and using them.

You might forgive this, however, because the BenQ EX3210U comes with a remote. The remote can be used to access all on-screen menu controls. It’s a handy addition that’s quicker and more comfortable than using buttons on the monitor.

The EX3210U has a pair of 2-watt speakers, plus a 5-watt subwoofer in the rear. This setup provides good sound quality. It has limits—the lack of stereo separation is notable and treble falls apart at high volume—but it’s a fine replacement for budget PC speakers. Many competing gaming monitors don’t even include speakers.

The BenQ EX3210U might be a gaming monitor, but it has nearly equal emphasis on superior image quality for content consumption and creation. This is generally good news, though the monitor does suffer several flaws.

There could be good reasons for this. In many cases, viewing SDR content at a brightness above 200 nits can make dark scenes look worse. It may even become uncomfortable over time when viewing in a dark room. Still, it’s better to let users ramp up brightness if they feel the need.

Contrast is a serious problem for the EX3210U. I measured a contrast ratio of just 540:1. Gaming monitors with an IPS panel, such as the EX3210U, are notorious for disappointing contrast—but the EX3210U’s performance is even worse than usual.

A lack of contrast is bad news for depth and dimensionality in both games and movies. Content often seems flat compared to displays with better contrast. Black level performance is bad, so dark scenes look hazy with noticeable bright spots along the edges of the screen.

The EX3210U is not alone, however. Direct competitors like the Viewsonic XG320U and Asus ROG Strix PG329Q share this issue.

While the EX3210U stumbles in contrast, it picks itself up with color performance. It delivers 100 percent of both the sRGB and AdobeRGB gamuts, plus 95 percent of DCI-P3. These are excellent figures that more than qualify the EX3210U as a wide-gamut display.

Gamers will generally like the vivid, oversaturated color that results. It looks crisp, vibrant, and punchy, especially in games like Valorant or Overwatch. Content creators who want to work in a color space beyond sRGB will appreciate this, as well.

Average color accuracy comes in at an error of 1.9, which is good, but not fantastic. Many competing monitors have similar performance out of the box. This level of accuracy is fine for gaming but won’t impress content creators who care about accurate color presentation.

The BenQ EX3210U has excellent gamma curve performance with multiple settings. This is good news for both gaming and content creation, as it helps provide an accurate and well-balanced image in a variety of situations.

Content creators should know this monitor has a true 10-bit panel, which increases the number of colors it can display without dithering and reduces color banding overall. The inclusion of a true 10-bit panel may contribute to its price. With that said, those who don’t already have strong beliefs about the importance of “true” 10-bit color are unlikely to appreciate this.

In summary, the EX3210U’s image quality is mixed. The monitor’s excellent color and sharpness provides a great experience when watching or playing punchy, detailed content. If you fire up darker games like Diablo II: Resurrected, or a noir movie like The Batman, the monitor’s problem with contrast will be noticeable.

Turning on HDR boosts the monitor’s maximum sustained brightness to 512 nits. This is higher than Viewsonic’s XG320U, which maxed out at 463 nits, but below the Asus ROG Strix PG329Q, which rose to 529 nits.

HDR content doesn’t look great, however, and contrast is again the culprit. There’s not enough of a gap between the brightest and darkest contrast to highlight surprising detail in either very dark or very bright scenes. The monitor offers a dynamic backlight feature, but because this is an edge-lit monitor, it doesn’t work well.

BenQ’s HDRi preset modes are not good. They drastically shift both the color and gamma towards a brighter but less accurate presentation. The result is a flatter, less colorful look that I don’t think anyone will prefer. The monitor’s DisplayHDR mode is the only HDR image-quality preset worth using.

The BenQ EX3210U includes an adaptive image quality feature called HDRi. This sounds good but, in practice, it needs a lot of work. Any image quality improvement it provides is difficult to discern.

The BenQ EX3210U supports refresh rates up to 144Hz over DisplayPort and up to 120Hz over HDMI 2.1, and it includes two HDMI ports. Motion clarity is strong at both 120Hz and 144Hz. Fast-moving objects show only minor blur and retain enough clarity to easily see the action. Great motion clarity also retains detail when you quickly flip the camera, such as turning in a first-person game.

Games also feel smooth at high refresh rates, which is to be expected. A refresh rate of 144Hz might seem meager compared to smaller 240Hz or 360Hz displays, but remember: This is 4K. This is good as it gets for a 32-inch, 4K monitor.

BenQ embraces AMD FreeSync Premium Pro for adaptive sync. This makes sense given the monitor’s focus on console gaming in addition to PC gaming, as the PlayStation 5 and Xbox Series X are powered by AMD graphics hardware. The monitor is not officially G-Sync certified, but G-Sync functioned when the monitor was connected to both an Nvidia GTX 1080 Ti desktop graphics card and a laptop with Nvidia RTX 3060 mobile graphics.

BenQ’s Mobiuz EX3210U is a monitor aimed at two different users but doesn’t hit the mark with either.

The inclusion of two HDMI 2.1 ports and a 4K/144Hz panel suggests a focus on console and PC gaming, but the monitor’s disappointing contrast ratio limits its appeal. It’s only ideal for vivid, saturated games.

Content creators will like its wide color gamut and true 10-bit panel, both of which contribute to outstanding color support. But the monitor lacks useful productivity features like USB-C, and its color accuracy is merely fine.

The EX3210U could be a worthy pick for a couple hundred dollars at MSRP. Until then, I can only recommend it to content creators who want to play 4K/120Hz games on the same setup they use for work.