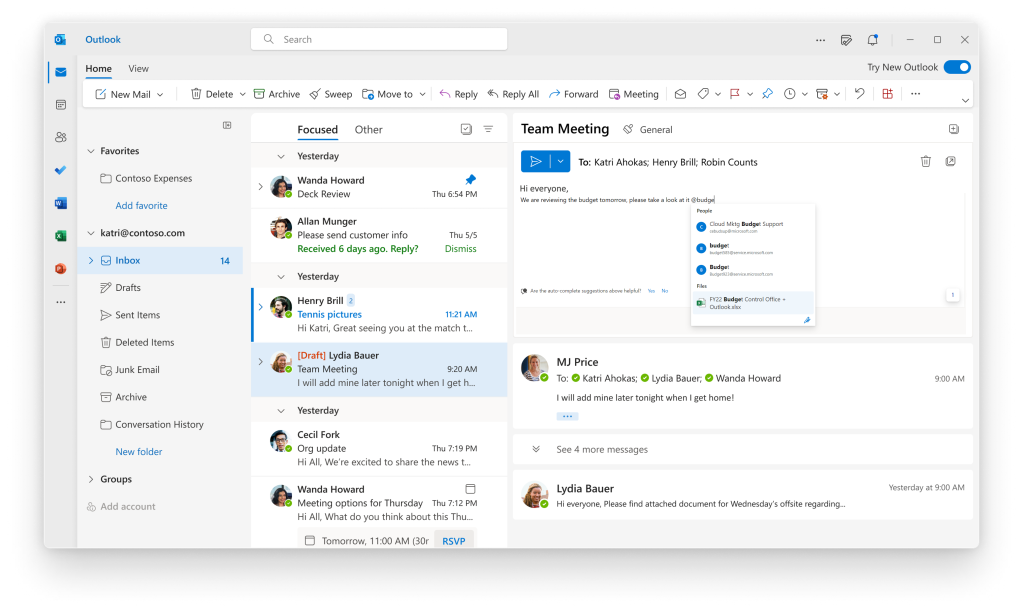 The future of Outlook is here, albeit with some caveats.

Microsoft officially released the new Outlook for Windows on Tuesday afternoon, with features that integrate Microsoft’s futuristic Loop interface as well as more practical innovations such as quick document attachments, a “My Day” summary, and reminders to respond to important email. For now, though, the new features are only available to members of the Office Insiders program, specifically the Beta Channel.

We’ve seen the “future of Outlook” many times over the years, from 2015’s simple, effective Outlook apps for iOS and Android, to 2017’s more cohesive approach toward unifying Outlook across various platforms. We’re also seeing the first fruits of “Project Cortex,” in how Microsoft (and its rival, Google,) are blurring the lines between various applications. But Microsoft has also been working to clean up the various versions (the Web, Office 365, Web apps and so on) and provide a unified version of Outlook for the PC. That leaked out earlier this month, and it’s here now.

Microsoft designed Outlook to look familiar, and it does—especially if you’re used to the Outlook web app. Unfortunately, it’s not available to many users. To be a member of the Office Insider program, you must either be subscribed to Microsoft 365’s consumer edition or ask your corporate administrator to enable it. Consumers can easily switch to the Insider program (from any Office app on Windows, click File > Account > Office Insider > Join Office Insider, then agree to the checkbox next to “Sign me up for early access to new releases of Office”). But you’ll need to also use a paid commercial or education account as your primary email to try the new Outlook, which can complicate the process.

“Namechecking” documents: Within Outlook, you can quickly type an “at” symbol (“@”) and then the name of a person, and it will be called out in their email. You can quickly “call out” files by using the same “@” symbol in front of files and documents. They need to be stored in the cloud, however. Unfortunately, that probably means that you’ll need to search the full name of “SalesPresentationMarch2022final3really” to attach it in this way.

“My Day” and “To Do”: You should start seeing a more visible “To Do” column to the right of your inbox. Also referred to as “My Day,” you’ll be able to use this space as a location to drag emails into, which will become tasks that you can check off.

An updated Calendar: It appears that while the Calendar will remain largely unchanged, a new “Board” view will essentially turn your Calendar into a bulletin board, where your work calendar can be added as a card, alongside tasks, important documents and tips. You’ll also be able to reserve space on your calendar and let people know you’ll attend their meeting either in person or virtually.

Sweep up the clutter: Microsoft is also encouraging you to use tools we’ve described before, such as Rules, to automatically manage and control email as they flow into your inbox. Microsoft calls this “Sweep.”

Loop and the future: Microsoft thinks the most important addition to the new Outlook client is Loop, which Microsoft described as making documents a sort of widget. It blurs the line between a document and a shared workspace — which for some users will be anathema, and for others a natural extension of a close-knit team. We’ll have to see how Loop evolves over the coming years and months.

For now, the new Outlook is in the hands of just a few, as it fixes bugs and adds features. Unfortunately, some of the basic capabilities you’d expect aren’t there: offline support, multiple accounts, and so on. Expect Microsoft to widen its audience as it improves its new Outlook client.