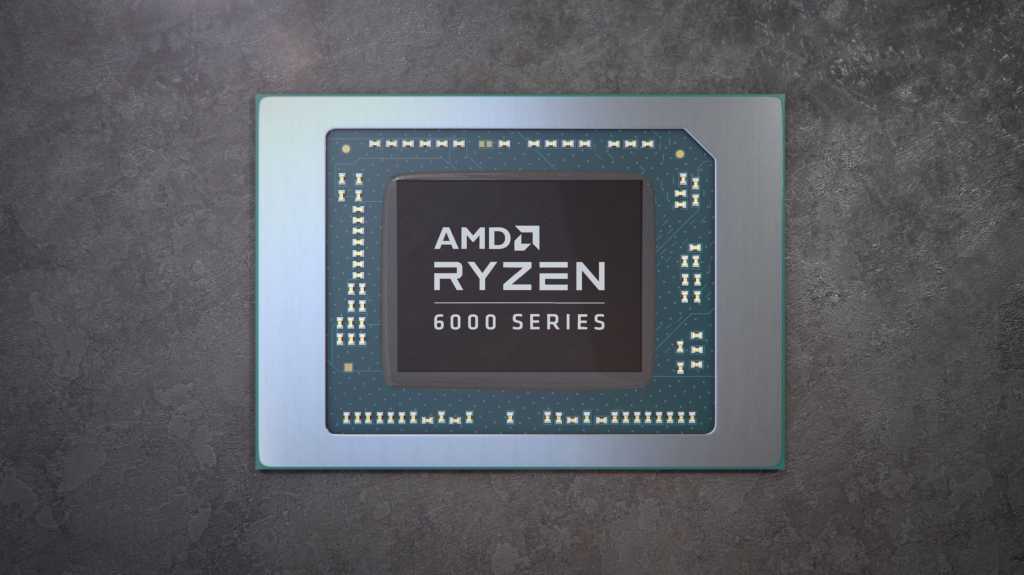 With the launch of its first Ryzen 6000 mobile processors earlier this year, AMD supercharged the performance of lighter laptops. Before, you had to look to five or six pound laptops to get the kind of power now available in a three-and-a-half pound notebook.

But that release was from the AMD’s beefier H-class processors—chips with a TDP of 35W or higher, intended for gaming, content creation, and other heavy production tasks. Now comes the next round of laptop CPUs, those meant for thinner laptops weighing under three pounds. These U-series processors are rated at a variable TDP of 15W to 28W, with the Ryzen 7 6800U as the headliner.

The video above includes an unboxing and wider look at the laptop we used for testing, along with deeper dive into this chip’s performance in key benchmarks. Here, we’ll be discussing the five key Ryzen 7 6800U takeaways you need to know.

Let’s look at the raw benchmarks for multithreaded productivity tasks, then dig into the data after.

When you look at benchmarks that make use of multiple cores and threads, like those focused on rendering or encoding, the Ryzen 7 6800U can post strong numbers. Our test results show some decent (and even sizable) double-digit gains on previous generations of processors. While the story here isn’t about a dramatic uplift in performance, the numbers do tell us this latest Ryzen processor is no slouch. You’re not compromising by choosing a chip designed for a thin-and-light laptop.

Sure, moving up to a Ryzen 9 6900HS would boost performance significantly—55 percent in Cinebench R23’s multithreaded test, for example. But you’d gain an extra pound or so (0.54 kg) as well. Our 14-inch 6900HS review laptop tipped the scales at 3.6 pounds (1.6 kg); our 13-inch 6800U review laptop comes in at 2.4 pounds (1.1 kg) and would be closer to two pounds (1 kg) with a non-touchscreen. That weight matters when your primary goal is to keep your backpack or briefcase light and you don’t need to crunch hard on big files. The 6800U packs a punch for its size. In fact, it’s not far off from the 6900HS’s predecessor, the 4900HS—just 2.9 percent lower in Cinebench R23.

The same consideration applies to competition like the Apple M1 Max MacBook Pro, too. It edges out the 6800U in Cinebench R23 by about 16 percent, for example, but the 14-inch version weighs 3.5 pounds (1.6 kg). The real competition is likely Intel’s 12th-gen Alder Lake laptops. Based on our look at Intel’s flagship H-class Alder Lake mobile processor (aka the top chip from a more powerful line of CPUs found in beefy, performance-oriented laptops), we expect Intel’s best Alder Lake U-class processor would offer a close fight, too, but those chips aren’t available yet.

2) But gaming is where it shines

We already know the RDNA 2-based integrated graphics in Ryzen 6000 mobile CPUs are powerful. The Ryzen 9 6900HS trounced the Core i9-12900HK’s on-board graphics. Using the same technology as found in AMD’s Radeon RX 6000 series of graphics cards is a winning formula.

But the Ryzen 7 6800U’s same ability to play games at 1080p at tolerable frame rates has far more real-world impact. Yes, even if your graphics settings are on Medium or Low.

As touched on in our 6900HS recap, discussing top-notch integrated graphics performance in that high-end chip or even other H-class processors is an intellectual exercise. They almost always get paired with discrete graphics. Not so with thin-and-light notebooks. But with a Ryzen 7 6800U laptop, you don’t need a dedicated GPU. Dropping one into a two-pound productivity laptop transforms it into a lightweight gaming machine as well. You might have to drop down to 720p in some games, and you won’t be able to crank visual options to the max, but you can still play them locally on the PC, rather than have to rely on cloud-streaming services like GeForce Now or Xbox Cloud Gaming. Just a handful of years ago, gaming on a thin-and-light laptop wasn’t really a thing.

3) It’s good, but not great for basic productivity

Most people don’t think about finding the best laptop CPU for office work. But if you spend your time in Outlook or PowerPoint to the near exclusion of everything else, you actually might want to pay attention to benchmarks for those programs. At least, you should if you’re deciding between a high-end Ryzen 6000 U-class chip and other contemporary options.

When you look at the results for how the Ryzen 7 6800U stacks up against older chips, you’ll see some improvements—but you’ll also see how it doesn’t always beat the Intel Core i7-1195G7 or Ryzen 7 5800U. The Ryzen 7 6800U is no slouch in everyday productivity tasks, but you may find another Ryzen U-series chip could better suit your needs and budget. On the flip side, if you can’t afford to be slowed down when firing off email or assembling slide decks, or can’t bear anything but ultra-zippy web browsing, you may be better off with an Intel laptop instead.

By the way, hardcore Excel users shouldn’t consider their needs as falling under basic productivity. Crunching numbers at the level of an Excel eSports competitor hits a CPU pretty hard, as you can see in the chart above.

4) It enables speed across the board

You may already recall this info from the Ryzen 9 6900HS launch, but in case you forgot, Ryzen 6000 processors come with platform upgrades, too. So when you’re looking at laptops with the Ryzen 7 6800U, you’ll want to weigh more than just performance benchmark results.

Ryzen 6000 series CPUs support PCIe 4.0, USB 4, DDR5 memory, Wi-Fi 6e, and Bluetooth Low Energy 5.2. For a notebook with a U-class processor like the 6800U, that translates to fast storage and memory, as well as quicker data transfers with USB devices and over wireless connections. USB 4 ports also support DisplayPort 2 and charging, reducing the number of cables you need. These are the kinds of features people may not immediately think about when comparing current laptops against older models, but they can make a material difference in your day-to-day experience, especially as the notebook ages.

Unlike desktop PCs, the variability in laptop design impacts performance. Two laptops can have the same processor but notably different results in tests.

Battery life isn’t immune to this effect. How long a single charge lasts depends not just on the processor, but the battery size and the display’s power consumption, too. Still, a battery benchmark helps identify which chips provide particularly good or bad performance, even when it’s a simple video rundown test.

Our usual benchmark involves playing the Tears of Steel 4K video on loop while in airplane mode, with earbuds plugged in at 50 percent volume and the screen brightness set to a relatively bright 250 to 260 nits. When given this task, our 6800U laptop lasted for almost 16 hours. That’s an excellent stretch of time, especially when you consider the notebook’s size.

AMD has claimed Ryzen 6000 processors can reach up to 24 hours of battery life, but their testing methodology uses a dimmer, more-energy efficient screen brightness of 150 nits. Because of the lack of apples-to-apples comparison, what’s more important here is how the Asus Zenbook 13 with the 6800U stacks up against the same model with a 5800U—you get a 25 percent bump in battery runtime. An extra three hours is a tangible increase, and backs up the idea Ryzen 6000 improves on battery life compared to previous generations. In the end, that’s what matters.

Editor’s note: This article originally published on 5/19/22, but was updated 5/20/22 to include our hands-on testing video.