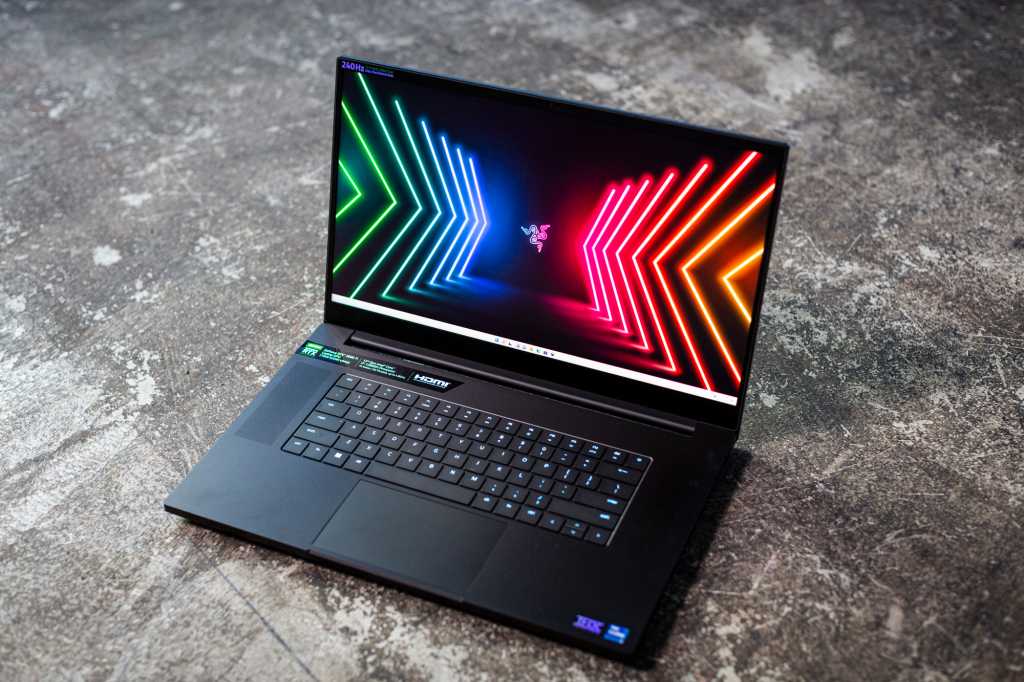 The Razer Blade 17 is a big and robust laptop with a stunning 240Hz QHD display and a great selection of ports. Its Intel 12th generation i7 CPU and GeForce RTX 3080 Ti GPU make it a powerful performer in games.

The Razer Blade 17 looks identical to the Razer Blade 17 (2021), but benefits from a spate of refreshed hardware features, including a faster 12th-gen Intel Core i7 processor and souped-up RTX 3080 Ti GPU that together deliver impressive power. The latest version also has a generous port selection that any gamer would be happy to have.

What’s more, it excels in the all-important display department, delivering big ticks for video and image quality, including color, contrast. and visual clarity. Although it lacks decent battery life and is quite pricey, overall it’s an impressive laptop that delivers a close-to-desktop gaming experience that’s a cut above many competitors.

The 2022 Razer Blade 17 is available in a couple of different configurations. The highest tier includes the Intel Core i9-12900H processor and GeForce RTX 3080 Ti GPU, with prices starting at $2,699.99. Our review unit’s specifications are as follows and costs $3,999:

When something has been fine-tuned to near perfection, why would you change anything? That about sums up why we think the Razer Blade 17’s design is mostly the same as last year’s, bar a few small upgrades that add to the laptop’s appeal.

Those upgrades include bigger keycaps for more comfortable typing and laser-cut speaker grilles that replace the more inset ones in the 2021 Razer Blade 17’s chassis. These combine with more substantial hardware upgrades – 12th generation CPUs for all new 2022 configurations and, in our review unit, an upgraded RTX 3080 Ti GPU and 32GB DDR5 RAM – so props to Razer for adding useful upgrades over merely aesthetic ones.

We’re glad to see the T6 CNC aluminum chassis return this year. We’re told it’s milled from a single block of aluminum for durability and, as such, it feels remarkably rigid and sturdy with barely any give around the keyboard and trackpad. That’s not unexpected in a laptop of this caliber yet the sturdiness extends to its 16:9 QHD display which has virtually no flex. The hinges are also extremely firm, allowing the top to stay open a mere inch from the base.

Admittedly, all that metal makes the Razer Blade 17 quite heavy – it weighs a whopping 6.06 pounds. The sizeable 280W GaN power brick, despite having a smaller footprint than the 2021 one, is hefty, weighing 1.54 pounds. Consequently, you won’t want to be hauling this laptop around too often. If you have to, its 0.78 x 10.24 x 15.55 inches fits snugly into a normal sized backpack.

Although large in stature, the Razer Blade 17 isn’t flashy. Minimalist styling throughout promises that nothing will distract you from gaming. The most striking two features are the fluorescent Razer logo on the top cover followed by the per-key lit Razer Chroma backlighting that brilliantly lights up the keyboard when you type and intelligently switches itself off when you stop. A barely visible black on black Razer logo also sits on the lower bezel like an engraving.

Unlike some previous Razer Blade 17 iterations, this year’s model is finished in a fingerprint resistant coating. While it doesn’t entirely prevent prints, it does reduce them to just dull smudges, freeing you from constantly having to wipe your laptop down.

The Razer Blade 17’s keyboard, which is hemmed in by the speakers either side, doesn’t really make full use of the ample chassis space available. Accordingly, it lacks the key selection you’ll find in some 17-inch gaming laptops whose keyboards more closely resemble their full-sized desktop counterparts. For example, there’s no right-side numpad. Those hoping for full-sized arrow keys will have to make do with half-sized ones too.

That won’t be to everyone’s taste yet it can have the effect of simplifying your gameplay. There’s also enough variation to keep you competitive in games; you still get left and right shift, ctrl and fn keys, as well as F1 to F10 and number keys along the top. Plus, what the Blade 17 lacks in key selection it makes up for with generously sized keycaps that provide plenty of width for your fingers. The keys are clicky and responsive, too.

The centrally located precision trackpad scores points for being one of the fastest I’ve used. It responded very well in games, allowing my fingers to slide quickly and effortlessly across its surface. It also looks perfectly proportioned.

Although Razer’s line-up includes a configuration with a higher resolution UHD display and slower 144Hz refresh rate, our unit’s 240Hz QHD panel felt like the one you’d want for stunning visuals at decent framerates. The display, which covers 100 percent of the DCI-P3 color gamut, always looked amazing with vibrant rich colors, excellent contrast, and sharp detail, regardless of whether I was watching videos or gaming.

Had it been a 144Hz refresh rate, I suspect it may have struggled to keep up at this resolution. However, 240Hz was quick enough to deliver video smoothly, even when things sped up on screen. Smoothness in games is helped along by Nvidia G-Sync, which matches the display’s framerate to the GPU’s.

The one weakness of an otherwise excellent display is its lack of brightness, which measured only 300 nits by my Lux meter. Still, if you keep it set to 92 percent brightness in Windows, it never looks too dark. The display also handles direct sunlight very well thanks to an anti-glare coating.

The Razer Blade 17 comes with a 1080p Windows Hello webcam rather than a 720p one. That’s quite a rarity for gaming laptops. I found it produced images with decent whites and colors, although images will still show up a little grainy in dark rooms.

Launching a few games allowed me to test the Razer Blade 17’s audio, which was crisp and clear. The volume levels are also pretty decent and can fill up the room. This laptop packs in 8 speakers all up, including 4 tweeters and 4 subwoofers. This impressive contingent also produces noticeable bass that you’d be hard pressed to hear in other laptops.

The generous selection of ports flanking the Blade 17, which includes 3 x USB 3.2 Gen 2 Type-A ports and 2 x Thunderbolt 4 ports, allow you to plug in just about all your devices at one time. Of course, the beauty of that is with the right input devices, you can setup your Blade 17 like a desktop with a wired mouse and keyboard for low latency gaming.

The Razer Blade’s Thunderbolt 4 ports should prove useful for both gamers and creatives alike since they allow you to connect up multiple 4K or 8K external displays. They provide faster data transfer rates (up to 40Gbps), which is useful for quickly loading up large files. At the end of the day, that means less laborious waiting time.

The Razer Blade 17’s Wi-Fi 6E and Bluetooth 5.2 also places it among the fastest laptops for 2022 for wireless connectivity.

As we review more laptops with 12th generation Intel CPUs, the true power of these processors comes increasingly into focus. Our review unit, with its Intel Core i7-12800H processor, clearly demonstrates this. It proved too powerful for most of our older comparison laptops’ CPUs. We say most because three of our comparisons had comparably powerful next gen hardware.

Our chosen line-up consisted of mainly laptops with CPUs capable of providing the kind of processing power you’d expect in high-end gaming laptops. These included 2022 releases such as the MSI GE76 Raider with its mighty Core i9-12900HK CPU and the Gigabyte Aorus with a Core i7-12700H CPU.

First up, we ran Maxon’s Cinebench R20 benchmarks, which measure CPU performance. In the Cinebench multi-threaded benchmark, a test of all the cores of our laptop’s processor, the Razer Blade 17 ranked third in our comparison line-up showing it has ample CPU power for high-end gaming and CPU demanding tasks like video editing or encoding.

The Razer Blade 17 scored an impressive 691 in the Cinebench single-threaded benchmark, which tests just one core of our laptop’s CPU. This result positions the Blade as one of the most capable among our comparisons for running everyday programs and apps.

Our Razer Blade 17 proved similarly capable in our next benchmark that uses the free HandBrake 0.9.9 utility. This test involves encoding a 30GB 1080p MKV file to MP4 and gauges our review laptop’s ability to cool down before it needs to throttle performance. The Blade placed behind two other laptops with 12th generation processors—the MSI GE76 Raider and Gigabyte Aorus—but finished the test ahead of the Asus ROG Strix G15 Advantage Edition and Asus ROG Zephyrus S17.

Overall, the Blade has the muscle to power through just about any task you’d need it for. If you’re unsure about upgrading to a laptop like this one with 12th gen Intel processor, these results may help you decide. They show the Blade’s i7-12800H CPU does have an edge over laptops with older processors—even those with snappy i9s or AMD Ryzen 5000 series CPUs, proving the efficacy of the new generation of faster Intel processors.

It’s worth noting that some of the laptops that fell by the wayside held prime position at the top of our performance spreadsheets in 2021. Laptops like the Asus ROG Strix G15 Advantage Edition now sit much lower down the list.

Our Razer Blade 17 sports a GeForce RTX 3080 Ti GPU set to 165 Total Graphics Power (TPG). This is an upgrade from the GeForce RTX 3080 set at 130 TGP in that same configuration last year, and it puts an extra 1280 Nvidia CUDA Cores, 40 Tensor Cores, and 10 Ray Tracing Cores at the Blade’s disposal. Our gaming benchmark results below show it was an excellent performer, helping our unit achieve a place among the vanguard of gaming laptops in Q2 2022.

In the Metro Exodus benchmark, the Razer Blade 17 managed an impressive 53 average frames-per-second (fps). This score was only 3 fps slower than the MSI GE76 Raider and the 17-inch Asus ROG Zephyrus S17, both of which feature speedy Intel Core i9 CPUs.

Looking now at the chart for the Rise of the Tomb Raider benchmark, the Razer Blade 17 clocked an impressive 158 fps – the second highest score. That’s 56 percent more than the Asus ROG Strix Advantage Edition, which, up until recently, was one of our highest scorers in this benchmark.

Rather than solving that age old conundrum of how to get a long battery life out of a gaming laptop of this size, the Razer Blade 17’s battery life is sorely lacking. In our battery test, which runs the laptop down from 100 percent to standby by playing a 4K video on repeat, the Blade’s 82WHr battery lasted just shy of five hours. That’s even with Nvidia’s Advanced Optimus technology being switched on – a feature known to extend a laptop’s battery life.

Unfortunately, that means you’d be lucky to get more than two and a half hours gaming time when you’re not connected to a power outlet – which is a little disappointing.

The Razer Blade 17 is impeccably designed and sturdy. Its powerful 12th generation processor and GeForce RTX 3080 Ti GPU perform brilliantly in games. Although battery life is tardy and the laptop is quite expensive, a string of other premium attributes like its stunning 240Hz QHD display place it among the best 17-inch gaming laptops money can buy.