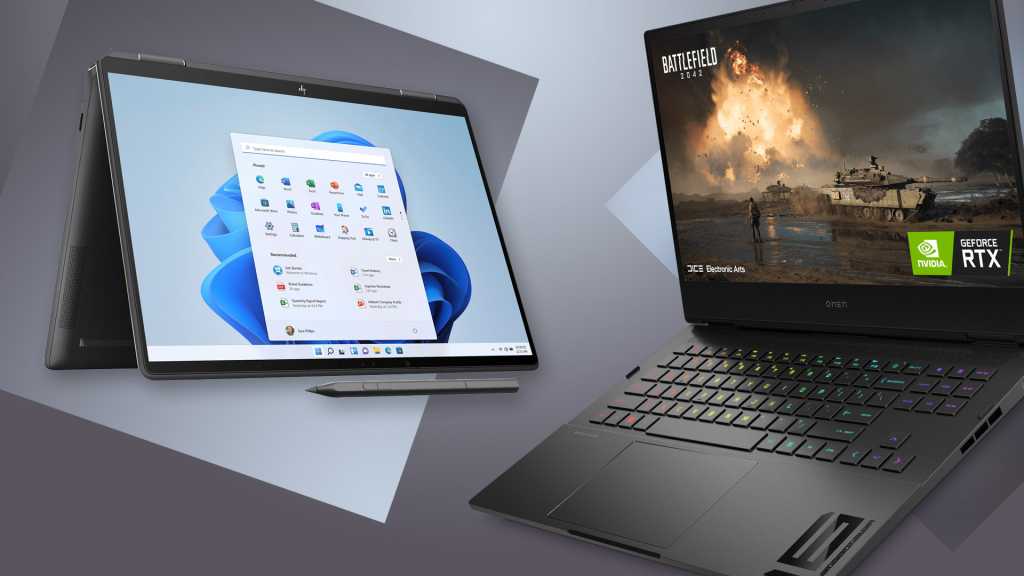 HP is coming in hot with a host of new laptop designs. At an event in New York City, the company showed them off to us: the new Spectre x360 13, Victus 15, and Omen 16. Gordon Ung walks us through the features of the new designs in all three new laptops in a trio of videos on the PCWorld YouTube channel.

The Spectre x360 13 is the latest of HP’s high-end 2-in-1 designs, competing directly with more expensive variants of the Lenovo Yoga and the Acer Spin. Highlights of the updated version include a 3:2 aspect ratio, a built-in electronic privacy filter, and the latest 12th-gen Core i7 processor and Iris Xe graphics. The battery is 66 watt-hours, an impressive size for a laptop this small. Note the included pen (get it?) that magnetically fastens to the lid.

The Victus 15 is a sort of jack of all trades, combining mid-range price and build with discrete graphics card options. Inside you can configure it up to a 12th-gen Core i7, paired with up to an RTX 3050 Ti graphics card (though many users will probably opt for a cheaper 1650). The chunky build allows for plenty of ports, including full-sized HDMI and an SD card reader. With a good price and flexible hardware, it would make a great option for a student who wants occasional gaming power.

The last, largest, and most powerful laptop HP showed off is the upgraded Omen 16. The biggest change you’ll notice is a new 1440p panel with refresh rates going up to 165Hz on the high end. HP has also moved a bunch of ports to the rear of the laptop, like dual USB-C/Thunderbolt and HDMI, in addition to a fold-down gigabit Ethernet port and plenty of USB-A. A redesigned dual fan setup with more blades and tons of heat pipes keeps things running smoothly.

If your budget can stretch to the highest configurations, you can get a 16-core 12th-gen Core i9-12900H processor and an RTX 3070 Ti GPU, with 150 watts of power enabled by all that cooling. RAM and storage are variable, but impressively, the user can access both DDR5 SODIMM slots and the M.2 SSD, so upgrades are super easy. The Omen 16 will also come in an AMD model.

The new Spectre X360 13 is on sale starting today at Best Buy with a base price of $1250. Both the Victus 15 and Omen 16 will launch later this summer, starting at $800 and $1200, respectively. For more coverage of the latest PC and laptop news, be sure to subscribe to PCWorld on YouTube!