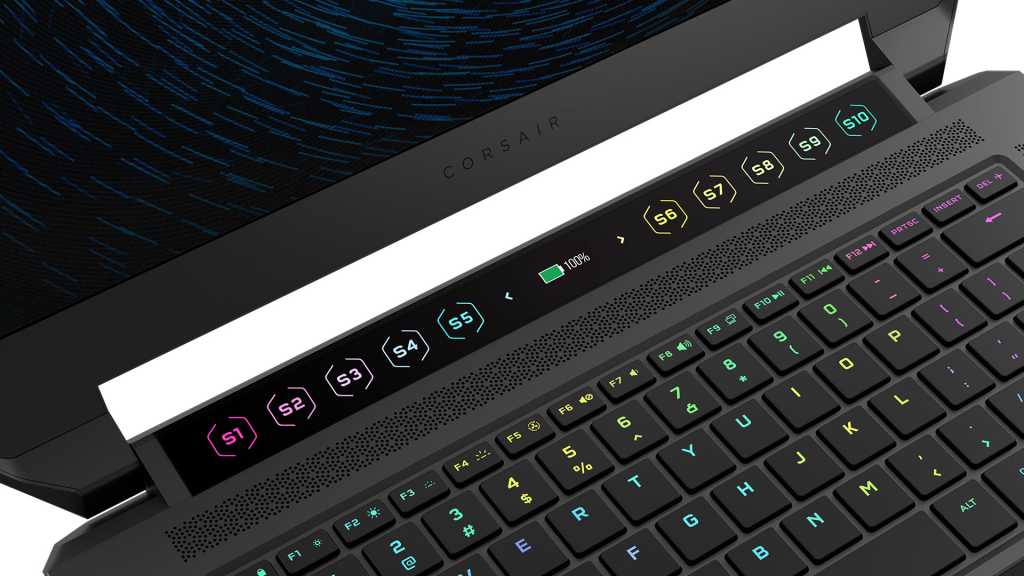 It’s rare to see a gaming peripheral company take the plunge and make its own in-house laptop design. But it just got a little less rare, as Corsair has announced its very first notebook. The Corsair Voyager a1600 is an impressive bit of hardware with a price tag to match, but unfortunately it has no official launch date at the time of writing.

The Voyager’s 16-inch screen and .78-inch (19.9mm) thickness place it firmly on the larger side of the gaming laptop market, even before it tips the scales at 5.3 pounds. But the laptop’s sharp angles and wide, unbroken surfaces make it look more svelte than it actually is. It’s sort of like a stealth jet that looks small and sleek, before you see it in person and realize it’s 70 feet long. Once you get past the sharp angles around the hinge, the most distinctive feature is definitely the touch panel integrated into the same area.

Though at first glance this looks like a gaming-focused take on Apple’s MacBook TouchBar, that isn’t quite the case. This bar is mostly static, holding ten “S-keys” that are customizable like an Elgato control pad, controlled by the same Stream Deck software. There’s a permanent battery display, but otherwise the bar won’t be providing any distractions. And thanks to the generous size of the laptop, it doesn’t replace the function row on the keyboard, which is surrounded by speakers on three sides. The keys themselves are worthy of note: low-profile switches provided by none other than mechanical keyboard legend Cherry. RGB lighting is housed underneath, naturally, and check out the dedicated fingerprint reader on the right side.

But what about the guts? Inside the Voyager is the very latest number-crunching power AMD can provide. It’ll come with a choice of Ryzen 7 6800HS or Ryzen 9 6900HS CPUs, both paired to an RX 6800M GPU. The 16-inch screen is a gamer-friendly 2560×1600 LED panel pumping out 240 refreshes a second. Either 32 or 64GB of DDR5 RAM is offered, along with a PCIe 4.0 SSD in 1TB or 2TB capacities. The battery is the maximum available, 99 watt-hours, though there’s no mention of real-world battery life. And a selection of ports includes triple USB-C (two with Thunderbolt 3 and USB 4.0 speeds), one USB-A for older accessories, and a full-sized SD card reader. The webcam is “just” 1080p, but it looks like it’s paired with a Windows Hello-compatible IR sensor. It appears that the laptop needs a proprietary barrel charger for all that powerful hardware.

Despite the obvious gaming power with those CPU and GPU combinations and an official title that includes “gaming laptop,” Corsair is also pushing the Voyager a1600 as a machine for content creators and media types. The built-in Stream Deck buttons and SD card are part of that approach, though something tells me YouTubers and streamers will be bringing along their own camera and mic setups. The streamlined looks, which are a bit more boardroom than your typical gaming laptop, are part of that appeal as well.

The Corsair Voyager a1600 will come in two variants, priced at a hefty $2700 and $3000. Not the most expensive gaming or media creation machine around, but far from the mainstream. When you’ll be able to order one is up to Corsair (and possibly the strained supply chain), but sometime later this year seems like a safe bet.